Living in Silicon Valley, I find myself among the new generation of entrepreneurs who live by the gospel of disruption. Their heroes are people who have transformed traditional industries by introducing new technologies and new ways of thinking. They are creative, ambitious, energetic people who are convinced they are living in a time of unprecedented change and that almost every social institution is just waiting to be re-engineered.

A growing number of them are turning their attention to higher education. They regard today’s university as something like a beached whale, lying helpless on its side, gasping for breath. They view universities as slow-moving, tradition-bound, analogue institutions trying to survive in a fast, ever-changing, digital environment. “How could something designed that way possibly survive?” they say. “It’s too big, too clumsy, and too dumb.” And then they set out to reverse engineer this old model and design a digitized, user-friendly, web-enabled, cloud-based, next-generation whale app. 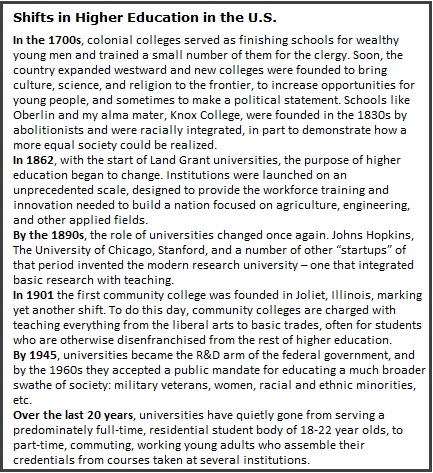 U.S. higher education is a $475 billion market, and the global market is far larger. Even at that size, it is an industry that serves only a fraction of its potential market. No wonder many entrepreneurs see it as one of the most attractive potential targets for transformation. Universities need to be taken apart and reassembled, they argue. In other words, higher education needs to be hacked.

What I find both amusing and disturbing about these conversations is how little hackers understand the industry they are determined to reform. Universities are among the longest-lasting institutions in society, in some cases hundreds of years old. Such longevity is evidence of their adaptability and resilience, not rigidity.

In his excellent new book, The History of American Higher Education, Roger L. Geiger writes: “For the first two centuries, colleges existed in a preindustrial economy and a largely rural society. After the Civil War, they gradually adapted to an industrializing economy, an urbanizing society, and a global knowledge regime.”

The magnitude of social change the American higher education system has both contributed to and responded to is at least as great as today’s technology revolution.

Over its long history, our higher education “system” has reinvented itself several times (see sidebar). At our nation’s start, colonial colleges served only a wealthy few. From that narrow beginning, higher education has grown to deliver education to the masses. In the early 1800s, higher education brought culture, science, and religion to the new frontier. After that, higher education shifted toward applied sciences like agricultural and engineering to better meet the country’s economic needs. Next, universities expanded into research, serving the federal government and training the next generation of scientists and thinkers. Community colleges sprang up in the early-1900s to replace trade schools and help meet the needs of a population often disenfranchised from traditional higher education.

Higher education has helped advance racial equality and women’s rights. It has brought new opportunities to our veterans and given many more the chance to escape poverty. These forward-thinking efforts and results are evidence of a movement that pushes boundaries, not a “beached whale” about to take its final breath.

Most recently we’ve seen the development of the fully online institution — a modern version of the correspondence school, which dates back to at least the 1890s. Online education holds the potential to change the reach, efficacy, and cost structure of advanced education. But even in this respect, it is only the latest chapter in a story of change that now spans several centuries.

Each wave of innovation has been a response to new social needs and each has been massively disruptive in the modern, high tech sense of the word. It is clearly a mistake to think that higher education cannot change and innovate. Rather, history shows us that:

Universities are catalysts of change. The physical campus, the magisterial professor, and the medieval caps and gowns are cultural markers of tradition, but these outward symbols mask important underlying changes in mission and practice that occur regularly.

Universities are conservative and resilient. Institutions that are always chasing the latest fad are likely to miss the mark as often as they hit it, often with fatal consequences.

Universities are good at absorbing innovation. Today’s universities have already adapted to the demand for online mediums by offering online courses at conventional public and not-for-profit universities.

Universities are survivors. The local effects of disruption are consequential for individual institutions, but as with any population, culling weaker, less adaptive individuals makes the larger enterprise stronger.

Higher education still faces substantial challenges, but the locus of change needed to meet those challenges may very well remain in established institutions.

I am not arguing that universities should be immune from criticism, nor, even less, that they should be shielded from the competitive forces that shape today’s economy. But, with apologies to Santayana, those who are ignorant of history are doomed to underestimate those who lived it.

Geoffrey M. Cox, PhD, is the president of San Francisco-based Alliant International University, a nonprofit regionally-accredited university that converted to a public benefit corporation. Previously, Dr. Cox served as Vice Provost at Stanford University and Associate Provost at the University of Chicago, where he earned his PhD.