As 2014 comes to a close, Oracle has done us the favor of putting the period on the end of a very important sentence: Marketing services are the marriage of technology and data.

The punctuation is Oracle’s acquisition of Datalogix, which has over the last several years become one of the best known holders of shopper data. Companies like Oracle, Adobe, Google and others that are looking to scale enterprise-level marketing services need both analytics ability and source data … but to derive the most value from these services, they need to own that data.

The Datalogix acquisition is only the latest in a string of purchases by Silicon Valley giants to amp up their marketing and targeting capabilities by adding established and differentiated data and analytics to their offerings. Despite its place in a long line of similar purchases, this move isn’t just another exit playing out.

Rather, it’s indicative of larger forces moving towards consolidation in marketing services that we’ll see speed up in 2015.

This isn’t the first time Oracle has been an example of this trend.

In February, the company snapped up another data management platform, BlueKai, for a reported $350-$400 million. Including the Datalogix acquisition, plus early acquisitions of Eloqua and Responsys, that makes for an impressive four acquisitions of marketing insight firms within just the last two years. 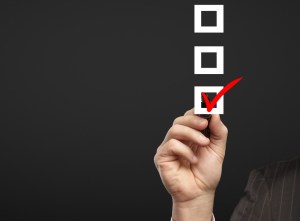 Above: Checking the boxes

Oracle’s move into marketing services once seemed strange — its core business, after all, is selling corporate databases, a B2B field that is more about giving customers the tools to manage and mine their own data. But the distinction between software and services isn’t as sharp as it once was and Oracle is just one of a number of companies that have recognized the growing need for data-based marketing, no matter the core business.

Datalogix brings a dataset that wasn’t in Oracle’s arsenal before. In this world of big data, it’s not just more data that matters, it’s having unique datasets that can be brought together and cross-referenced to make a whole greater than the parts. BlueKai may have been all right at developing behavioral targets based on site visitation, but understanding what the people represented by those cookies actually purchase — which is what Datalogix does very well — brings a reality to those cookies they never previously had.

It’s clear that the marketing services industry is in a period of consolidation, where the companies with unique technologies, methodologies, or data warehouses are being analyzed by the large players to see how they will fit into their marketing stacks. As this story plays out over the next 18-24 months, expect to see companies that own and interpret data in play. Such companies will have viable offerings of their own, but will be much more valuable in combination with potential new siblings.

You don’t need to look much farther for evidence of this than recent examples such as Alliance Data’s acquisition of Conversant, or even IBM’s purchase of Silverpop. By this time next year, who knows how many companies we’ll see follow suit and consolidate as marketing increasingly grows into the intersection of data and technology.