As startups begin to tap into relatively untouched areas of the economy, legendary entrepreneur and cofounder of AOL, Steve Case, has released a book titled, The Third Wave: An Entrepreneur’s Vision of the Future. The book describes the new era we are entering of immense technological advancements that are transforming virtually every non-digital sector of the economy, including education, healthcare, our food system, and beyond. 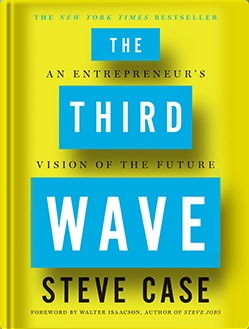 In his book, Case describes how the first wave laid the foundation for the online world — technology companies developed the hardware and software that made it possible for people to connect to the Internet. The second wave grew on top of that foundation. Search, social, and e-commerce startups made it easier for us to sort through the vast amount of information now available at our fingertips. Social networking and mobile applications also emerged and radically changed our everyday lives.

Now, he claims, we are entering the third wave, where ubiquitous connectivity will allow startups to transform major, real-world sectors of the economy. However to do so, Third Wave entrepreneurs will need to build partnerships and collaborate with governments and policy-makers in ways that the second wave has so far, hardly had to do.

Governments have the ability to partner with startups to transform the way they are delivering services to their citizens across the globe, but these collaborations will require radical changes in mindsets and policy to be successful. Startups will need to engage with governments and navigate regulatory rules successfully to bring a product or service in these sectors of the economy to market.

Case also believes that revolutionary innovations in the Third Wave will come from various regions outside of Silicon Valley, and he touches on a few of the new startup hubs with developments underway across the United States, including the Midwest and the Big Easy, but what about the startup hubs forming outside of the U.S.? What are the implications of the third wave concept for startups globally?

While government-startup collaborations are still in the early stages globally, many countries are taking lessons from success stories in the U.S. and envisioning how they too could benefit from collaborating with startups to improve the lives of their citizens at a much faster rate.

How the third wave will play out beyond the U.S.

In regions like Latin America, tech adoption is still behind the U.S. and investors tend to be much more conservative and risk-averse. We may see startups in emerging markets move directly from the first wave to the third wave, skipping the bulk of the second wave altogether.

Rather than taking the traditional routes to funding a new idea, which often can be painstakingly slower than the same approaches in the U.S., it’s highly likely we’ll see a growing number of startups in emerging markets focus instead on bringing their ideas to market by cooperating with governments and making strategic government partnerships. If innovators in these regions are to transform real-world sectors of the economy, the startups who identify with the importance of government cooperation will have a better chance at scaling and succeeding. Needless to say, this approach does not apply to all startups, but for those that it does, they should take advantage and move fast.

Marcelo Cabrol, manager of external communications for the Inter-American Development Bank Group, explains in his piece on the collaboration opportunities for startups and governments that it may be more promising for startups to create situations that drive governments to demand collaboration in order to adopt and to receive the innovative products or services startups have to offer. This approach also assumes that governments will embrace more risks than they’re currently willing to accept. However, this type of collaboration could result in greater benefits for all.

Cabrol also points to the example of Colombia-based 1DOC3, a Spanish-language web platform in which physicians are available 24 hours a day to answer inquiries for free and anonymously, which has attracted many teenagers to the platform seeking guidance and answers to questions about contraception, teenage pregnancies, and more. According to a National Demographic and Health Survey, 19.5% of Colombian women between the ages of 15 and 19 years old are mothers or pregnant. The response to the platform has been incredible. 1DOC3 has delivered more than 14 million medical suggestions and has teamed up with the Colombian Institute of Family Welfare (ICBF) as part of a strategy to reduce teenage pregnancies in the country.

Mark Zuckerberg also praised the company during the recent Facebook F8 conference in San Francisco. Zuckerberg commended 1DOC3 as a prime example of how startups can create tools for the good of the people — precisely the type of partnership Case also envisions dominating the third wave.

As we move into this exciting new era, Case declares that “disruption can no longer be a mantra; it has to be a strategy. And while your product has to be great, your partnership skills may end up determining your success or failure.” I believe this will be particularly important for startups outside of the U.S. that may be tossing around disruptive ideas to change the lives of everyday people — whether it’s in the healthcare, transportation, or agriculture sector of the economy. Entrepreneurs must find the best ways to work with governments and get governments to work with them if they are to survive and thrive the next wave.

Gonzalo Costa is cofounder and managing partner at NXTP Labs, the most active early stage fund for tech companies in Latin America. He also provides consulting services related to management and strategy for venture creation and financing in emerging markets.