Ubisoft has learned a thing or two about virtual reality.

The giant French video game publisher loves to experiment with new game platforms. Whenever a new one arrives, so do new Ubisoft games. With VR, Ubisoft has tried a number of things, and in October it launched its first VR game, Eagle Flight, a simulation game where you can fly above a future version of Paris as an eagle. After the game debuted, Ubisoft found that 73 percent of the game sessions were longer than 10 minutes, which went against the conventional wisdom about how VR was too uncomfortable for people to stay in it for very long.

Ubisoft also launched Werewolves Within, a VR version of the Werewolves tabletop game, where players try to figure out who among the villagers among them is a werewolf. And the company is working on Star Trek: Bridge Crew, where VR players take on the roles of a starship’s bridge crew.

David Votypka, creative director at Ubisoft Red Storm, and Chris Early, vice president of digital publishing at Ubisoft, gave a talk about the lessons the company has learned in VR at the Casual Connect Europe event in Berlin. I interviewed them after the talk about those lessons. 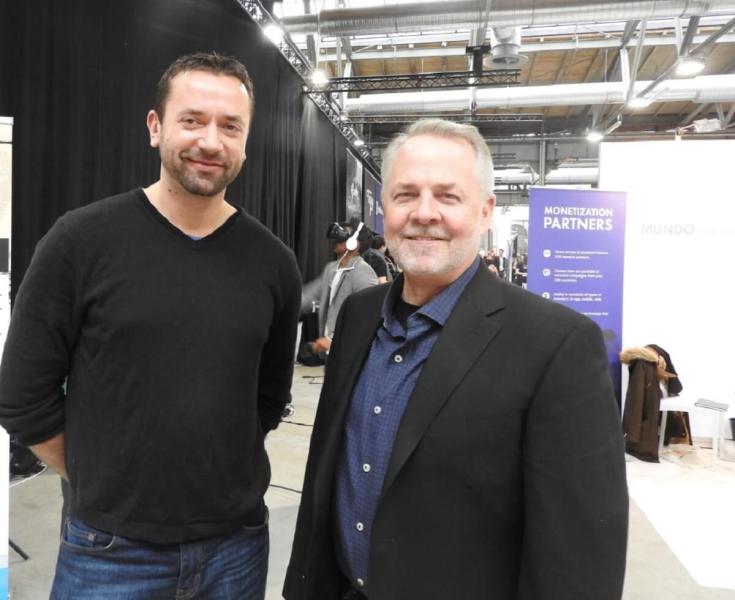 Above: David Votypka (left) and Chris Early of Ubisoft at Casual Connect Europe.

David Votypka: The theme of the talk is things we’ve expected about VR in the early days, in three categories. One was locomotion. VR makes people sick, so you can’t do fast motion. Second was time in the headset. We’ve heard a lot of things from headset makers, like seven minutes is what we should be designing for. The third is that VR is antisocial.

What we’ve discovered is the opposite is true in all three of these cases, in a lot of ways. For locomotion, Eagle Flight is the example. You fly at high speeds, turning, fast motion. The vast majority of people are very comfortable with it. A lot of it comes down to the techniques they use, like closing off peripheral vision. Since our peripheral vision is designed to detect things here, if you sense something whizzing by it triggers motion sickness. When the game detects that, it closes that off, and it’s a very effective technique.

GB: The research must have taken you a lot of time. When did you discover that?

Chris Early: The work was done at Ubisoft Montreal. They had the idea for a flying game because they were experimenting with Paris from the Assassin’s Creed universe. They started noticing that some things worked and some things didn’t. One element that was bothersome was how fast things were going by.

Some of the research Olivier Palmieri did – he’s the game director on it – was in the concept of horse blinders, or what happens when race drivers go really fast. They get that tunnel vision effect, which allows them to focus. Instead of creating a small hole you look through, they do it dynamically. When it’s displaying fast motion on the screen, it trims down the field of view, and then opens it back up again when there’s nothing close by. You still have this wide vista, a panoramic field of view, until you get close to something. People don’t even notice it.

Votypka: That’s the surprising part for me. When I first saw it, I was watching a monitor of someone playing. I assumed people would see it right away. But then I tried it in the headset and I wasn’t even thinking about the effect. I didn’t notice it at all.

GB: It sounds a bit like this foveated rendering technology they’re saying could reduce a lot of the graphics computing requirements.

Early: We could do that with foveated, probably, by just blurring it instead of blacking it out. It might be enough.

Early: To be fair, they’re still calculating the full screen. It’s not a savings for us yet, because they’re trying to figure out where there’s too much motion. They’ve already had to figure out that there’s motion in that section, and then they black it out.

Votypka: Right. But rendering performance—this part doesn’t have to be as high-res as that part. Back to time in the headset, seven minutes is what they were saying you should design for in the early days.

Early: With Eagle Flight, 73 percent of our session times are more than 10 minutes. Eagle Flight is a short-sequence thing. You go in and do a bit of a flight. The missions are maybe a minute or two at the most. But people stay in for a long time. A lot longer than we expected. 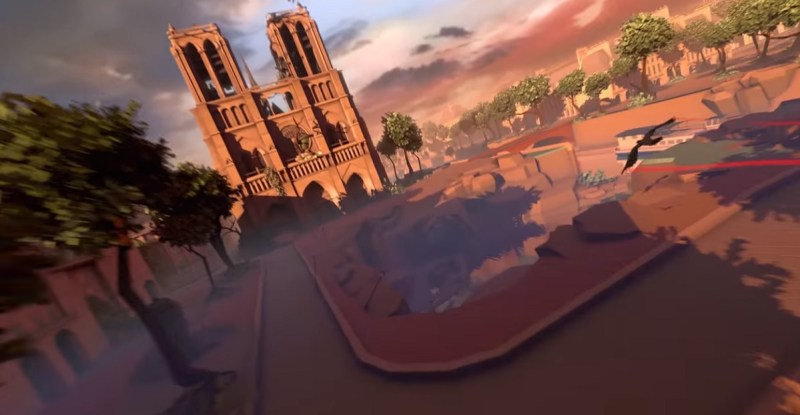 Above: Eagle Flight from Ubisoft Montreal.

Votypka: In the social VR stuff we’ve seen about a third of our players playing for an hour to three hours. Very long sessions, longer than we expected, especially compared to that estimate of just seven minutes. That’s been really cool to see.

The third part is this idea that when you look at somebody in VR in their living room, it looks very antisocial. But when you get people in a shared environment together, when your physical traits and voice are networked, you get this social presence. “Wow, I’m here with other human beings.” It becomes extremely social. Werewolves has been out for a little over two months and we’ve seen some amazing stories, from strangers playing together to how long people spend in the headset to how many friends they add. All sorts of very interesting things from what was, in a lot of ways, a social experiment. It’s a multiplayer-only game. It requires VOIP to play. It’s almost totally personality-driven. The gameplay systems are pretty simple. So much of it is just the players’ personalities.

All of these things were huge questions around shipping a game like that. For the players that are aware of it, we’ve had super positive feedback on all those aspects, which has been somewhat—we hoped, but we weren’t sure.

GB: Did you set out trying to ignore conventional wisdom?

Votypka: Social and VR were two things you just didn’t think about together a few years ago. For me, VR goes back to the ‘90s. All the time I’ve thought about it, I never thought about the social side until around 2014, when Michael Abrash from Oculus was at Carnegie Mellon giving a speech. He said, “There’s a lot of open questions about VR. But one thing I’m sure of is it’ll be the most social medium ever.” That’s a pretty bold statement.

We had some multiplayer prototypes in Unity. When we got our DK2s we put on the headsets and got it running quickly. We sat across this table from each other where previously we’d been sitting with a mouse and keyboard and monitor. We looked at each other across this warehouse environment and we could see each other’s head movements and so on. I thought, “Okay, I feel like I’m actually there with this person, not just looking at an avatar.” That moment, it felt like there was something to this — something that’s not obvious, but once you try it, it’s evident how tightly connected people can be in VR. It’s you, as opposed to just a pre-animated avatar.

Once that was proven, we started thinking about what kind of social games we could make. Werewolves was obviously our version of the original Mafia game. There’s been a lot of derivatives of that card game. We put in our own unique VR mechanics and gameplay rules. We went that direction because we wanted to focus on the social aspect, improving that with a well-known gameplay model. Social deduction is an interesting gameplay format for getting together around a table together. 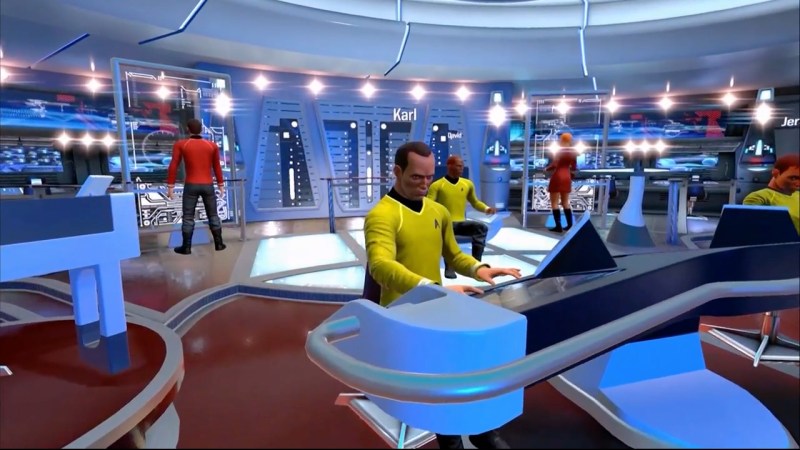 GB: It seems like certain genres fit will here. The board game genre in genre matches well with social VR.

Votypka: Right. But you look at Star Trek Bridge Crew, which we still consider a social VR game—I call Werewolves an around-the-table format, while Star Trek is a crew experience. In that case you’re all looking in different directions, seated in different places, more separated around the bridge. The around-the-table social connection isn’t there. We’ve designed it into the stations so you can work with each other. You still discuss with each other. But there’s another action component to the game, going on missions and fighting Klingons as a crew. It’s different gameplay from Werewolves, but it’s still social. A lot of different types of games can work in this social VR genre.