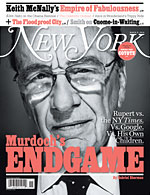 The article focuses on the Murdoch clan’s family infighting for control and succession, but it’s also full of yummy data points for media watchers: Where News Corp’s income comes from, which newspapers he’s spending money to destroy, where has he raked in another $2 billion in the last few weeks, and how much The Wall Street Journal spends on coffee.

Murdoch’s family is portrayed as bizarrely dysfunctional. I’d write it off as a magazine editor’s spin, if it weren’t for this fact-checkable item: Murdoch’s 47-year-old son-in-law Matthew Freud is the great-grandson of psychoanalyst Sigmund and head of a public relations firm whose client list includes Pepsi, Nike, Product (RED) and the London 2012 Olympics.

Matthew is an international PR pro, so it was no Freudian slip when he slapped his wife’s father in public by giving this quote to the enemy New York Times: “I am by no means alone within the family or the company in being ashamed and sickened by [Fox News chairman] Roger Ailes’s horrendous and sustained disregard of the journalistic standards that News Corporation, its founder and every other global media business aspires to.”