Updated three times: After I published the initial version of the story last night, two sources have told us they’ve heard that LinkedIn has raised or is raising a new round of funding. Techcrunch now says it has been hearing similarly. More details below. 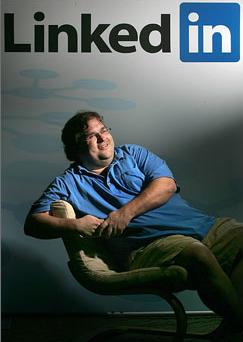 Something’s up at business social network LinkedIn. The Mountain View, Calif. company’s board meeting last week went way over its scheduled time, and sources tell us there’s some “good” news coming. The details are still hazy [but getting less so], and worth noting because of the ongoing rumors swirling about the company’s long-term plans.

Last fall, reliable sources said that News Corp was negotiating to buy LinkedIn. The purpose of that acquisition, we heard then, would have been to integrate LinkedIn’s network with News Corp. newspapers like the Wall Street Journal. Hopefully, this would help New Corp to revive its declining print-media ad revenue through online initiatives.

However, we’re told that deal was dead of last week, because of News Corp.’s purchase of Newsday. Its stockholders would likely look down on yet another purchase. It’s possible, however, that that the deal has been resurrected.

Here’s why LinkedIn may be considered valuable to a suitor. Its user base doubled last year to more than 20 million active users worldwide, and it claims that 1.3 million new members are joining per month. The average user is 41 years old and makes around $110,000 — which the company says allows it to charge advertisers $75 per thousand impressions (which is exceptionally high).

In recent months, the company has rolled out a developer platform for integration with third-party applications and web sites, an expert research network, company profile pages, and other features that may help it make more money. It is already projecting total revenue of between $75 million and $100 million this year.

This past January, cofounder and board chairman Reid Hoffman (pictured) told the Sydney Morning Herald that the company will most likely file for an IPO before 2010 if “he isn’t first tempted to sell to one of the suitors that have inquired about buying LinkedIn. Hoffman wouldn’t identify the suitors.”

LinkedIn representatives have either declined to comment or not responded after we contacted them yesterday.

Update: A new source has heard that the company is raising more money, which would imply that it is burning through the aforementioned revenue without making substantial profit. LinkedIn has previously raised $27.5 million from venture firms Sequoia Capital, Greylock and Bessemer Venture Partners. Also, the company’s developer platform has yet to publicly launch, as Dave McClure and others were quick to point out.

Update Two: Another new, well-placed source says they’ve heard that the company has raised a new round. Considering the company’s size, revenue and market position, my guess is that a private equity firm has stepped in with many tens of millions of dollars — just as PE firms have recently done for ad network Federated Media, IM aggregator Meebo, widget maker Slide, DIY social network creator Ning and other web companies. The general rationale behind these companies’ decisions to raise funding is that they’re neither large nor profitable enough to justify an IPO, yet too large and ambitious to sell. With the current economic problems, large chunks of late-stage funding will allow these companies to grow and figure out their business models until IPO and M&A markets improve.

Update Three: Techcrunch hears that investment bank Allen & Co. is helping LinkedIn to raise a venture round that would value the company at $1 billion.

And a bonus update: David Cowan, a managing partner at Bessemer, who sits on LinkedIn’s board, said no comment because it was a private board matter.