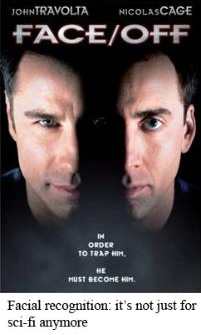 When social networks spread like wildfire through college campuses, it arguably wasn’t messaging friends, announcing events, or trading goods that drove the most use. It was browsing and (mostly) innocuous stalking. Humans are intensely social and curious, and technology now lets us learn more about each other faster than ever before.

Pew Research reports a third of U.S. adults and two-thirds of U.S. teens have social network profiles. Two-thirds of these users publicly post photos or videos of themselves and friends; 20% are even sharing nude or semi-nude photos. Combine that with news, government, and third party sources and you have hundreds of millions of identifying photos. With more than half of us searching about others online, this has positive and scary implications. Either way, these behaviors will only increase.

The ubiquity of mobile cameras, public sharing, and liberal laws on photography enable a new service: facial recognition from mobile phones. Let’s look at what a company like that could do — we’ll call it FaceTrace.

Like a Shazam for people, FaceTrace would be a mobile application that lets users snap a photo of someone, automatically upload it for comparison to a large database of public photos, and learn more about who they are. Face recognition has improved significantly through services like Face.com, which works even for photos in low light and different angles.

Why would people use FaceTrace?

Curiosity: Like Facebook, the main use case probably isn’t utilitarian but personal. Want to know who that hottie is and whether they’re single? Wondering if that vaguely familiar person is a celebrity or someone you know? Looking for some shared trait to subtly bring up in a conversation? FaceTrace could tell you.

Identifying missing people: 2,700 people are reported missing every day, equaling almost a million people annually. Half of them are juveniles. FaceTrace could help identify whether a suspicious or lost person is indeed missing. With training, FaceTrace’s technology could also work for lost pets.

Identifying criminals: If you see someone suspicious or a crime in action, FaceTrace could compare the suspect’s photo to a public database of mugshots, helping you decide whether to alert the police and head for the hills. FaceTrace could work with police departments to run these checks automatically and send the cavalry when needed.

Later versions of FaceTrace may allow users to identify places and inanimate objects. This would be a powerful form of search for traveling, buying, publishing, and discovery.

FaceTrace could be a free service monetized by advertising and premium features, such as seeing additional information beyond name and performing more than a few searches per day. Police departments, banks, convenience stores, casinos, and other organizations with an interest in identifying people would also likely pay for FaceTrace. Many currently have stationary face recognition cameras but could benefit from mobile access (to the chagrin of robbers and card counters everywhere).

FaceTrace would be capturing a large amount of photos, which suggests a viral marketing strategy. Users could choose whether to publicly share this media, which FaceTrace could tag with a “Captured by FaceTrace” caption. Millions of photophilic users already share their photos with friends so these links may spread quickly.

Face recognition for consumers is still fairly new, so there is not much competition. Augmented reality startups like Layar are impressively adding background information to snapped photos, though they have focused on places and not people. Face.com has focused on identifying people through Facebook, not the wider world. Either of these startups might enter this space, but there are enough possible applications for FaceTrace to focus on just one.

A key question is whether FaceTrace would terminally freak people out. The general acceptance of Google Street View, Loopt, Facebook photos, and many other privacy encroaching startups suggests FaceTrace’s appeal would outweigh the appalled. FaceTrace could let people opt-out of identification on the service, just as Jigsaw does for its business card sharing network. Even among those who worry about online privacy, Pew Research reports only half do anything about it. Right or wrong, privacy concerns continue to be more amorphous than actionable.

I feel mixed about this trend, but it’s inevitable that the web will link us in ways beyond our control. Like any tool, FaceTrace has the potential for both misuse and good. Hopefully, the first company to do this will bring us willingly together instead of guarded from afar.

Mark Goldenson promises to only take photos of your good side. He is starting an innovative venture in health care. To submit an idea for the What’s Next series, email Mark at mjgold3@gmail.com. Selected ideas will receive attribution.