In a college class on human sexuality, I learned a fascinating stat: over one-third of marriages stem from an introduction by a friend. Matchmaking has been practiced for thousands of years, from astrologers making matches with tarot cards to Ashkenazi Shadchans matching Jews for a fee (current recession pricing: $2,600).

Yet this ancient behavior has barely migrated to the web. For 15 years, most dating sites have been glorified databases: input your stats, run a query, and pick your result set (then, inevitably, settle). Not only does it neuter the most intimate of experiences, but the signal-to-noise ratio is maddening.

History provides a better answer: a matchmaking site based on friend introductions. Let’s call our hypothetical site Yenta (after the famous matchmaker from Fiddler on the Roof). Upon sign-up, users would complete a Yenta profile and invite friends through an inbox or social network crawler. Friends interested in matching their friends or themselves have an incentive to invite their own network, spreading the application virally. 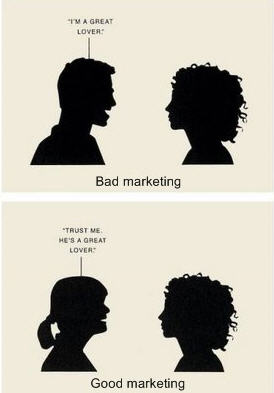 –Tap their networks: The rewards of finding mates for friends are powerful and not just limited to a lifetime of free moving help. It is perhaps the most special gift a friend can give outside of taking a bullet. Friends are intrinsically motivated to help you.

–Confirm you are not an axe murderer: Matchmaking has the big advantage of social proof. Friends are investing their credibility in a referral. Safety is a real concern for female daters, and seeing the sanction of others, especially other women, helps screen the Kris Allens from the Chris Browns.

–Sing your praises: The most powerful part of matchmaking is your friend’s personal pitch. One story from a friend is worth 10 pages of your blathering about enjoying sunsets and movies. Many of the traits we want in mates – kindness, intelligence, attractiveness – are hard for anyone to self-proclaim without seeming arrogant. Testimonials help solve that problem.

This model also solves a chronic problem for dating sites: like diet plans, they lose users if effective. Yenta doesn’t suffer this problem because taken people can still use the site to refer friends (though taken people should be clearly marked to ward off unwelcome interest or spouse shock).

Yenta could also smooth the matching process. Simple algorithms could suggest friend matches based on marital status, age, gender, location, and especially interests. Introductions could be anonymous (for shy match-makers) or blind (letting one friend secretly evaluate another). Games could break the ice, and virtual gifts could help close the deal. The introduction process will need a lot of tuning to get users comfortable with the potential awkwardness of an intro gone wrong.

The standard revenue model for dating sites — charging for contacting users — won’t work when friends can easily make intros off-site. Other options may work just as well: lead generation for dating related products (restaurants, activities, gifts), premium features such as seeing who has viewed your profile, and virtual items. The revenues will probably pale compared to Match or eHarmony, but free sites will soon kill those cash cows.

While Yenta’s viral model is compelling, dating is an extremely crowded space. Several matchmaking sites have come and gone. Engage raised $5M but took two years to launch a very average site. Its Facebook application bombed with only a few hundred users, and the company is on its last legs. Several major dating sites have social features like testimonials and recommendations but lack a focus and culture around matchmaking. Frintro is a new service and fbFund finalist targeting this space with a promising start but is a bit spartan and clunky. The space is still fairly open.

It’s not easy to find innovations in large, crowded markets, but matchmaking is a surprisingly untapped angle on the most primitive of needs.

What do you think?

Do you think Yenta is a good startup idea?(answers)

Mark Goldenson is eager to match his geeky friends. He is starting an innovative venture in health care. To submit an idea for the What’s Next series, email Mark at mjgold3@gmail.com. Selected ideas will receive attribution.