WhatsOpen, a secretive local search company that promises an easier way to find which stores are open near you, is now open for public use.

Just type in the name of the store you’re looking for, and your location. Results are displayed on a Google Map mashup, with listing of stores, their hours of operation, their phone numbers and their distance from the city center appearing in a left-hand column.

I often need coffee in Mountain View, California, at odd hours of the day or night. From what I know about the city’s coffee shops’ hours of operation (a lot), the results WhatsOpen gives me are accurate. See screenshot below. In more rigorous testing, I noticed that my favorite hole-in-the-wall Mexican restaurant in Mountain View, Jennifer Taqueria, doesn’t show up when I look for “burritos” or “Mexican food.” 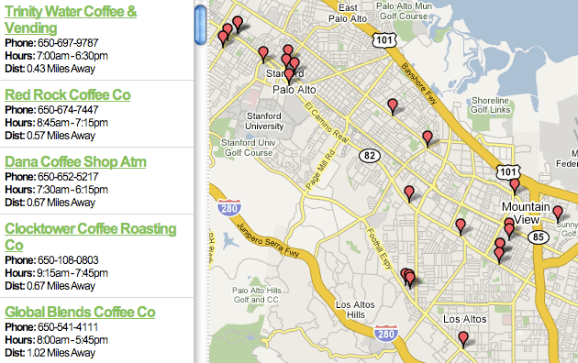 Still, the extensive open-hours information appears to give the company a leg up on its many local search competitors. Local search offerings from two of the company’s most serious rivals — Google and Yahoo — give results that include some local businesses’ hours of operation, but that is data entered manually by users. For most businesses listed in those companies’ results, nobody has entered anything.

Note: We’ve previously heard that WhatsOpen has a special relationship with Google. There’s no evidence of that at this time.

WhatsOpen also says it offers an iPhone application (which we haven’t had the chance to try yet), and it is working on an application for Google’s Android mobile software developer platform. The Android application will be GPS-enabled, WhatsOpen’s web site says, meaning results would show you more precisely how close a store is to you.

It also promises social networking applications, as a source told us last month, assumably so you can see what places are open while you’re on a social network site like Facebook or Myspace.

We’re not sure how the company plans to make money. WhatsOpen’s site says “one thing you won’t have to worry about is annoying ads or other forms of tricky advertising – we keep it simple, friendly, and genuine :)”

The feel-good tone of the company is everywhere on its site. For example, it has a manifesto-style “About” page, including a list of beliefs such as “We believe in the abundance mentality” and “We believe in a transcending culture” — though we’re not sure what these mean.
The beta is currently available in the US, China and Europe. The company is self-funded, from what we hear.