Suranga Chandratillake is founder of Blinkx. The following is an account of his experience making decisions based on intuition.

I remember the conference call distinctly.  It was mid-September 2004 and I got the entire blinkx team together for a big announcement.  We’d spent most of the last year on a desktop-based search product.  We’d had rave reviews from blogs, tens of thousands of downloads, our advisory board was happy, and our engineering and product team had new features they wanted to roll out over the next six months.

Despite all that, my call was to stop work and change direction entirely.  In the previous release of the product, we’d launched a mini-feature called “Video Suggestions,” which let users browse video content from the web relevant to any given topic.  The feature was new and the data scarce, but I announced that we were going to pause all desktop search development and instead build a web video search engine. To launch before the holidays we had just three months to build it, index millions of video clips and secure the marketing necessary to make the launch a success.

I made my big announcement, and was hit by a wall of silence.  While it started slowly, soon the pushback on that decision was flowing hard and fast in my direction. Some of that pushback included things like: There wasn’t enough evidence that this was the right thing to do, all the hard work thus far going to get abandoned, we were throwing away a lead in one market to start in another where we had no brand, no footing.  All of this was right.  All of it was rational, logical, sensible.

Yet, something in my gut made me feel I knew better. I just knew we had to switch, and as CEO I made that call.

After coaxing, bribing and steam-rolling the team got started and re-launched blinkx.com as a video search engine on December 16 with an article in the Wall Street Journal that brought us an immediate audience.  The exhausted team continued to question the decision — there was no guarantee that the new site would be popular and, worst, Yahoo had launched a rival product precisely a day earlier.

In the end, though, history has proven that the decision to change was right.  Desktop search, then a hot market, never really came to anything — it got bloated with competition (Google Desktop just a month after we switched direction, Yahoo soon after), then became irrelevant once both the Mac and PC OSes added built-in search functionality. Google discontinued its product in 2011.  Meanwhile, online video has been one of the most influential, significant technology trends of the last decade.  Through it blinkx has continued to grow, doubling in revenue every year on average since 2007 and emerging as one of the true successes of the market (alongside the industry’s big hit, YouTube, and others like the successful video ad networks run by Tremor, Brightroll and others).

Silicon Valley management strategy fashion suffers from faddish tendencies.  Recently, the CEO gut call has shrunk from prominence as the industry’s fetish on data-driven decision-making grows unabated.  It’s difficult to read about the way companies like Google and Facebook work internally without hearing over and over that data always rules.

As an engineer, I get this.  It’s driven by the scientific method, and it’s only natural that this trend will continue.  In fact, at blinkx, we obsessed as much about measurement data as we did about product features from the earliest days. Our team’s pedantic attention to detail on stats has driven some of our biggest successes over the years.

But at times, worshiping that data can fail you.  Sometimes, it’s impossible to collect the appropriate data at all while other times you have some relevant data but realize that new, hitherto uncollected data, might reverse the prognosis.  When in this position, you have three options: stall while more data is collected; make a decision based on current data; or ignore the data and go with what your gut says. The problem is, the first two ways often don’t work.  In the time-starved reality of the tech industry, waiting is really decision by indecision.  And making a decision based on data that you know is incomplete and/or flawed is just an exercise in CYA.

As a result, I believe most leaders will face the need to make gut calls throughout their career — here are three things you need to know about those decisions:

Start by creating an environment that facilitates confident gut calls.  The reality is that gut calls still depend on data, just not obvious or complete data.  The more data you feed yourself, the better you’ll be at gut decisions so keep track of any random detail that might inform strategic thinking.

For example, when blinkx switched to the video product, anecdotal data points gave me confidence to change direction.  I’d noted that the video feature in the desktop product had received more positive feedback from journalists than any single feature before.  While the base was low, I had also noticed that the video feature was growing faster than any of our other ‘content channels’ had at the same stage in their development.  And last, and least quantitative of all, I’d noticed how much stuff I was reading EVERYWHERE about the rise of online video.  Did this data add up to a logically sound decision?  No, but there was a heavy hint I felt increasingly good about in there.

2) When you make a gut call, grasp its enormity.

It’s important not to make endless gut calls that send your team scurrying off on diversions. So, understand the scale of the responsibility in the decision.

In 2011, blinkx acquired Burst Media.  I had pursued the deal over months but, in the last week of negotiations, it looked like things were going to fall apart. Nervous, I called a board member for counsel.  I went back and forth — I loved the team and believed in the strategic value, but the deal was proving complex and what if the market hated the idea in the short-term before we were able to prove how great a move it was?  The board member cut me short with a curt response, “listen, Suranga,” he said, “this is other people’s money you’re dithering about.  Millions of dollars of other people’s money.  I don’t know what you should do, but you do.  Just do what you know is right.”  It lacked sympathy, but the call created clarity.  You can never analyze this completely, so stop trying and make a decision because not making a decision might have the biggest cost of all.

3) Once you’ve made the call, commit.

By their very nature, gut calls can’t be defended by data so once you’ve made one, be prepared for strong follow-through.

Once I wanted to re-arrange a remote office, pulling people out of their offices and into a dense but open space.  We were not the only ones who liked the transparency this structure promotes and I like the buzz created by having tech, sales, and marketing in the same place.  blinkx HQ has always been like this and, though I did get my own office seven years into the company’s development, I still spent 90 percent of my time out of it.  Of course, I got fervent pushback.  People had great, rational arguments — they needed the space for their particular job, they had private calls to make, sales would annoy tech by being on the phone all the time, etc, etc, etc.  I was never going to win this argument on data, because there is no data that shows (definitively) that what I was suggesting was the better thing to do.  Instead, I stuck to the decision and showed no weakness whatsoever. Behind the facade, of course, I listened, and six months later made some changes back and even transplanted some of the new ideas back to blinkx HQ. But showing weakness up front would have fatally diluted the impact of the gut call.

The ability and confidence to make gut calls is one of the great tests of being a leader.  I meet would-be CEOs all the time who think they will apply data and process to every decision they need to make.  Beware: the real world doesn’t work this way.  Sure, start with rigor and data, but be ready to leave it behind when you need to.  Collect data, even if it doesn’t always fit perfectly. Take big calls seriously, and realize that not making a decision can be as bad as making the wrong one. And once you make a move, be ready to weather both the negativity from others and your own emotional reaction in the inevitable cases when it all goes wrong.

If you can follow through on the three points described above, you have part of what it takes to be a great CEO.  If not, you may struggle. 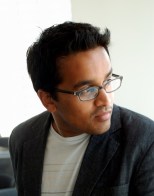 A technology entrepreneur with over a decade of experience in next-generation search, Suranga Chandratillake founded Blinkx in 2004 and launched the company in 2005. After early success, Suranga took the company public on the London Stock Exchange in May 2007. Prior to founding blinkx, Suranga was U.S. CTO of Autonomy Corporation, responsible for growing Autonomy’s research and development division in the United States. Before joining Autonomy, Suranga held a variety of roles in technology, sales, and marketing at Morgan Stanley, Netdecisions, and Anondesign. Follow him on Twitter at: @suranga_blinkx.