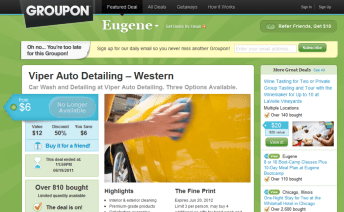 “Sorry we ripped you off. Your best bet is to go to Groupon and get your money back. We’re too chicken shit to answer the phone, so you got this message anyway. Sorry for your problems. Better luck next time.”

That’s the actual voicemail that greets potential customers looking to make an appointment at Viper Auto Detailing in Eugene, Ore., which ran Groupon and LivingSocial offers in June. (The audio of the message is even more galling in its flip tone. You can listen to it here.) According to statistics available on Groupon’s site, 861 Groupons for Viper Auto Detailing totaling $18,644 were sold in Eugene. The business appears to be shut down, and Groupon and LivingSocial are giving refunds to customers who purchased the offer.

This is one of dozens of stories I’ve heard of merchants closing down shortly after running a daily deal. To date, consumers have been offered Groupon credit or full refunds by Groupon when a merchant goes under or refuses to honor a Groupon. LivingSocial also gave refunds, as well as an additional $5 credit. Full refunds are great for consumers, but not for daily deals companies (or their investors).

The reasons a merchant closes down after a daily deal are varied and it can’t always be determined, even after the fact. Among the possible reasons:

Even with refund policies, a company going under can be a trying ordeal for customers, one that may make them less likely to return to the deals service.  It’s unclear how many customers were affected by the sudden shuttering of Viper Auto Detailing. Viper’s Groupon ran on June 19 and Hannah B. wrote this review on Yelp August 19:

Betty Barton, another Groupon customer, tried to redeem her deal by making an appointment through Viper’s Web site. She didn’t receive the promised confirmation. “I decided to go by VAD’s physical address when I was out that day and discovered they have closed up shop and vacated the premises with no forwarding address,” Barton said. “I inquired at a neighboring business and the gentleman there had no idea where VAD had moved to, or if they were still in business.”

Viper had also run a deal on LivingSocial. Barton bought that one, too. “I can imagine with the deals they were offering through Groupon, they were blindsided with more business than they could handle.” Both Groupon and LivingSocial quickly refunded Barton’s money.

Living Social’s Andrew Weinstein told me, “We are refunding all of the customers who purchased the deal and giving them $5 in additional deal bucks for any inconvenience associated with the cancellation. We proactively reach out and offer refunds in the rare cases when something like this happens.”

Groupon is also proactive about notifying consumers when a business fails or otherwise refuses to honor a Groupon. While researching this story, I received a notification that a business I purchased a Groupon for had a change in management and was no longer offering the Groupon. (My money was quickly refunded.) Although that is great news for consumers, it is a worry for investors.