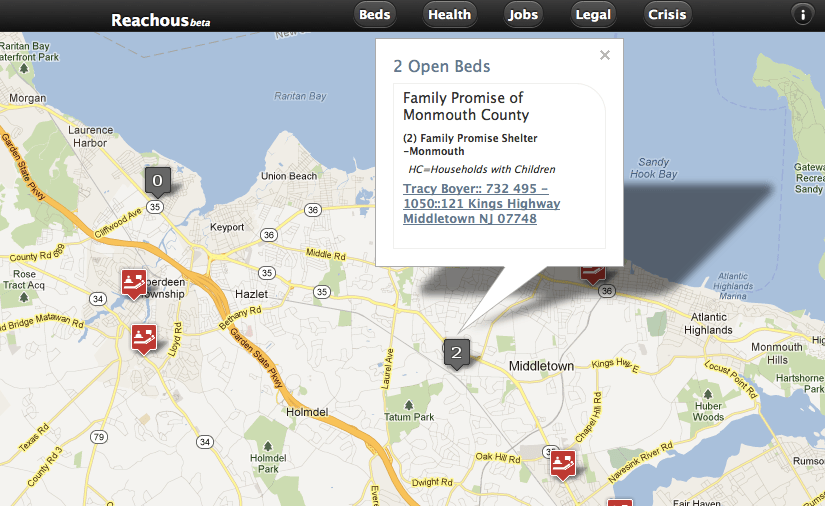 Can a mobile app help the homeless? The U.S. government thinks so, and it has drafted a few good developers to compete on just such a project for a $25,000 grand prize.

Today, the VA Innovation Initiative announced the five finalists of its Project REACH (Real-time Electronic Access for Caregivers and the Homeless) competition. The challenge, launched on March 22, was to build a mobile web app for smartphones and tablets that could help the homeless locate nearby resources such as a bed for the night, food, health care, legal assistance, and employment services.

The contest is a collaboration between the Departments of Veterans Affairs, Housing and Urban Development, Health and Human Services, and the Jon Bon Jovi Soul Foundation. Each finalist receives a $10,000 prize and will go on to compete for the final purse. (Check out the final projects below.)

Since smartphone and tablet adoption in the homeless community is understandably low, the apps are targeted at organizations such as shelters and health clinics that can give patrons and employees access to the apps.

“The genesis of this Challenge occurred at the Soul Kitchen last winter when we saw the need for a simple, user-friendly, comprehensive application that would allow us to direct our diners to other resources in the community,” said Bon Jovi in a statement. He then teamed up with the VA Innovation Initiative and a contest was born.

Building an idealistic app is one thing, but to really determine its usefulness you need beta testers. The final stage for the Project REACH finalists is an in-the-field test period at the JBJ Soul Kitchen. The winning tool must run on iOS and Android devices and work in at least one popular web browser. The organizers hope to the winning app and scale it up to use nationally.

The contest was hosted by Challenge.gov, the U.S. government’s site for crowdsourcing tech solutions to a variety of problems. Challenge.gov is run by ChallengePost, a hub for contests that was started in 2009 with funding from Betaworks and Steve Wozniak.

Currently, there are 190 open challenges on Challenge.gov, with prizes ranging from the satisfaction of a job well done, all the way up to $15 million for invention innovative lighting products.