The past few years have been a heyday for video game mergers, with $100 million-plus valuations paid for developers with one or two hits, a couple of million users, or simply a platform. Yet we have seen a recent lull as acquiror currency (meaning public stock) has waned and the key players are busy integrating their recent acquisitions. Despite this lull, it behooves us to consider where startups and established players alike might be headed in the near future. The most relevant question for those in my line of work is whether or not the recent successes (which have been primarily on mobile) will be the big merger-and-acquisitions exits in the near-term, or if they will continue to grow into public companies and be the next DeNA or GREE?

To that end, we have found it most instructive to plot major platform (online vs. mobile) against IP/audience (casual vs. hardcore) in a scatter plot (Exhibit A): 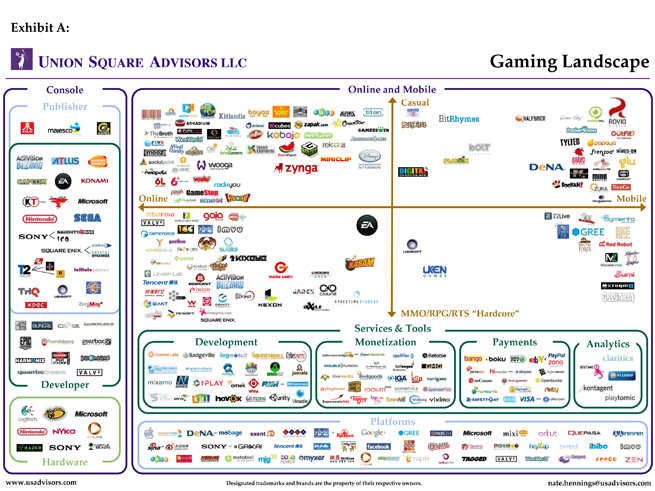 Rather than merely slathering logos on a page, this approach enables us to plot movements in the space and get a sense for likely near-term M&A and major strategic in-house initiatives. Once the landscape is mapped out, certain white spaces emerge (Exhibit B): 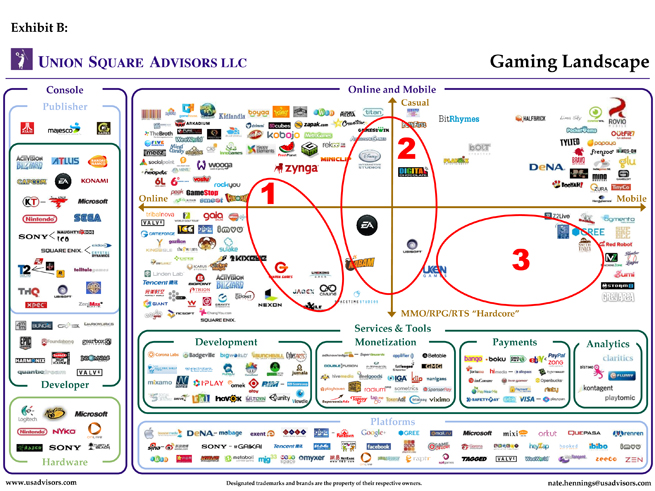 These white spaces are instructive to our view as to where acquirers are heading (Exhibit C): 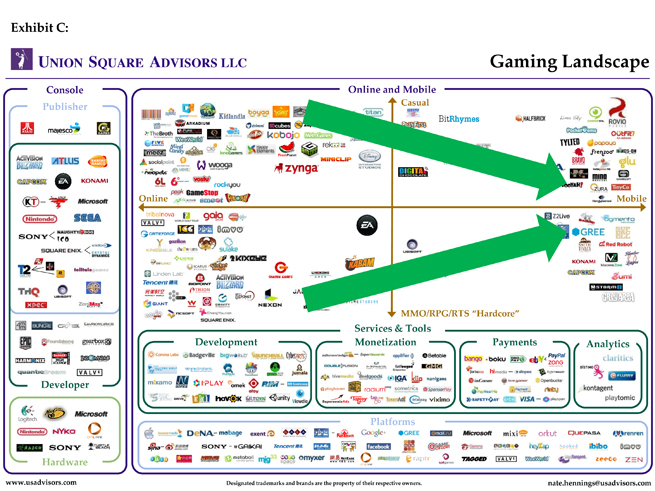 We explain possible causes for these white spaces, and the possible movements in the industry, as follows:

Despite these challenges, we are seeing a broad shift (Exhibit C) from left to right (from online to mobile) and toward the center (toward midcore). Mobile-social midcore has emerged as the promised land – a place where Zynga, Kabam, and others are heading full speed ahead.

So what factors are driving these moves? Our guess is some combination of powerful (and sometimes addictive) game mechanics (farming and resource management, battling) coupled with flexible session times that facilitate mobile monetization. Clearly, a social aspect also drives engagement, with the more successful games using Eastern-style (anonymous) as opposed to Western-style (your Facebook friends) frameworks (many players just want to interact with avid players and not necessarily their professional colleagues or family members; this paradigm dominates in Asia). Recent successes in the real-time strategy/tower defense-style games (such as Clash of Clans or Galaxy Life) seem to nail these criteria. Their mechanics monetize extraordinarily well – fast advancement in the game is a few pennies away, yet leveling up in a short timeframe could cost tens of thousands of dollars (which whales are happy to pay). These games build loyal followings by enabling both short and long social session times (with the long sessions not just long but engaging) and coaxing the player to advance faster through microtransactions along the way.

Another catalyst for this left-to-right movement is the “mobile-first” development strategy. The most successful developers on the far right (think Rovio, Storm8, or Supercell) are mobile pure-plays; their success has spawned the recent, much-discussed “mobile first” philosophy. Underscoring the relevance for “mobile first” is Backyard Monsters’ success on Facebook — and Clash of Clans’ greater dominance on mobile. Kixeye announced a mobile version of Backyard Monsters (previously through development partner Ngmoco on the Mobage platform but now developed in-house) early last year, and the game has yet to launch. These are two strikingly similar games differentiated by a few tweaks.  Were it developed “mobile first,” would Backyard Monsters be capturing the $2.4 million a day that Clans is reportedly bringing in?

Perhaps these are obvious points, and some clearly have been the foci of developers for the past two to three years. Yet it remains to be seen – is there a decade of runway for new developers to compete with iterations of these game mechanics, or are the mechanics that have made games like Clash of Clans so successful now “mature,” with little innovation to undergo in the near-term?

M&A advisers and game developers/publishers alike will want to know what this all means for the M&A market. The odds of a Supercell or a Rovio being acquired are likely lower than those companies going public, but perhaps EA or Zynga finds a way to make a big play here. Or better yet – perhaps Activision goes all-in with a big acquisition – they have yet been relatively silent on the M&A front.  Even more interesting could be one of the platform players (Apple, Amazon, or Google) making a move into content. Though this may seem like an odd proposition, Netflix just made this leap, and the (stock) market loves the move. Regardless of how this plays out, there will be less “white space” in our landscape as the market matures.