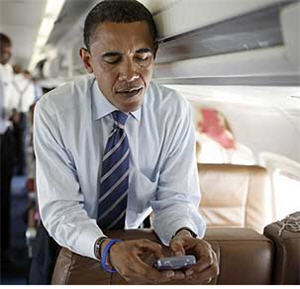 Yes, Burton confirmed, Twitter is blocked on White House computers for legal reasons. The Obama administration is looking for a way to get around that restriction. But some specific people on the administration’s new media team are allowed to tweet officially.

According to Burton, the twitter.com/whitehouse feed, created shortly after President Obama’s inauguration and launched in May, is updated by Macon Phillips, director of new media, and online programs director Jesse Lee.

President Obama’s campaign feed, twitter.com/barackobama, which issued hundreds of updates in the months running up to the election, went silent following the election but is now live again. It is tweeted separately by members of the Democratic National Committee at the Eisenhower Executive Office Building.

Below are the best bits of Sklar’s Q&A with Burton. HootSuite is Twitter software that appears to be used to update the White House account.

Are people allowed to bring their own laptops into the White House and work off those? Would that allow them to get on Twitter.com from inside the White House?

We use official government computers and archive records.

A little bit of recordkeeping a little bit of security but we are working with WH counsel and the Office of Administration CIO [Chief Information Officer] to review and relax these restrictions.

Not to my knowledge.

If not, could you point me to a few?

I have an account that I follow on my personal blackberry but I don’t actually twitter myself. It’s more to keep track of what Diddy and Perez Hilton are up to all day.

Would it be fair to call Robert Gibbs “internet-savvy?” Or would it be hideously inaccurate?

I’ve never known him to exactly break new ground as it relates to technology – but he’s a real whiz on his blackberry.