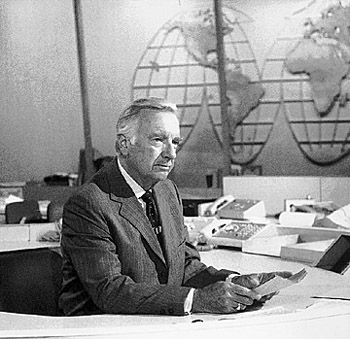 Walter Cronkite, former CBS anchorman who was the “most trusted man in America,” passed away at age 92 yesterday.

There was an “authority to what Cronkite did every night that no network anchor before or since has ever been able to match,” according to Charlie McCollum at the San Jose Mercury News.

As I look out at the blogosphere, I don’t think we’ve got a match for Cronkite yet. We have plenty of people who speak their opinion, but they’re doing so without the authority or the credibility. Cronkite saved his commentary for rare moments, like when he told Americans after the Tet offensive of 1968 that the Vietnam war was destined to become a bloody stalemate. President Lyndon Johnson, who watched the pronouncement, famously said, “If I’ve lost Cronkite, I’ve lost Middle America.”

Today, that seems like a foreign notion — that a news anchor would say something and almost everybody would trust it. The public seems to think of journalists as untrustworthy — lapdogs or paparazzi.

It’s very presumptuous to think that blogs could inherit the kind of audience market share that the CBS Evening News once had during Cronkite’s heyday. But modern journalism is changing and people are consuming media in different ways than they once did. I’m well aware of the business model of many bloggers. Scream loud enough, or be outrageous enough, and the readers will come to you. But I sincerely hope that quality, responsibility, and trustworthiness will be rewarded. We would be lucky indeed if the blogosphere produced its own Walter Cronkite one of these days.

It’s too bad the younger generation doesn’t know Cronkite. But at least we have YouTube to share some of his finer moments. Here’s how he reacted to the death of President Kennedy in 1963.