I love Jackson Hole, Wyoming.  It is one of the most extraordinarily beautiful settings in the world.  One cannot help being in a good mood when observing the breathtaking wildlife, open sky and the awe-inspiring Grand Tetons.

Thus, reading the reports from the August annual economist confab in Jackson Hole could not have been more depressing.  If the practitioners of the dismal science sound this pessimistic amidst such an uplifting setting, what will their attitude be when they trade back in their cowboy boots for green eyeshades and return to their drab offices to stare at spreadsheets?  A usually staid Allen Sinai sounded positively hyperbolic, yet apparently spoke for many at the conference, when he told the New York Times,“I’m more worried than I have ever been about the future of the U.S. economy. The challenge is unique: poor and diminishing growth, a sticky unemployment rate, sky-high deficits and a sovereign debt that makes us one of the most fiscally irresponsible countries in the world.” 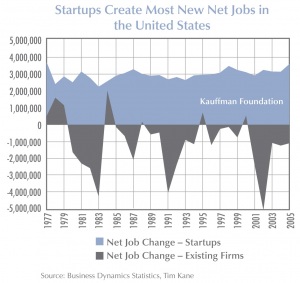 In his Oval Office speech on Iraq, President Obama acknowledged his concerns about the economy and declared, “Our most urgent task is to restore our economy and put the millions of Americans who have lost their jobs back to work…We must unleash…innovation…and nurture the ideas the spring from our entrepreneurs.”

So here’s what I don’t understand.  If everyone, including the president, believes that supporting innovation and entrepreneurship is the best path forward, why aren’t the policy leaders taking action?  Thomas Friedman of the NY Times has been hammering on this issue for the last year, calling on the president to “launch his own moon shot” and make innovation and supporting the start-up economy his top priority.

First, let’s review the data.  The Kauffman Foundation did a comprehensive study of historical job creation and, not surprisingly, found that small businesses are the main source.  “Without startups,” writes Senior Fellow Tim Kane, there would be no net job growth in the US economy.  This fact is true on average, but also true for all but seven years for which the US has data going back to 1977.”  See the above chart.

But despite the obvious data and the presidential rhetoric, we are not seeing any action from policy leaders on either side of the aisle. It’s almost as if the policy makers think speeches exhorting innovation are more important than doing the hard work of pushing forward legislation that will actually positively impact the innovation economy.

I’m no policy expert, but it strikes me that there is a clear innovation agenda that has been put forward by those who are the most knowledgeable about the issues.  A few of the ideas being proposed seem obvious, but are stagnating due to a lack of leadership.  For example:

The amazing thing to me is that none of these ideas – and many others floating around the entrepreneurial community – require big dollars.  Instead, they require big leadership.  Where is that leadership going to come from?  Who will be our champion for entrepreneurship?  Ted Kennedy played this role in health care.  John McCain played this role in campaign finance reform.  Who will step up and be the champion for entrepreneurs?

Here are a few other ideas:

When you look at the exciting progress being made in global broadband access, the Human Genome, ubiquitous wireless access and devices, energy innovation and so much more – it is clear that we are living in an extraordinarily unique time, truly a golden age for technology and innovation.  If only we could get our policy leaders to take big actions to match their big rhetoric.  Then next year’s Jackson Hole conference might be a lot more fun for everyone.