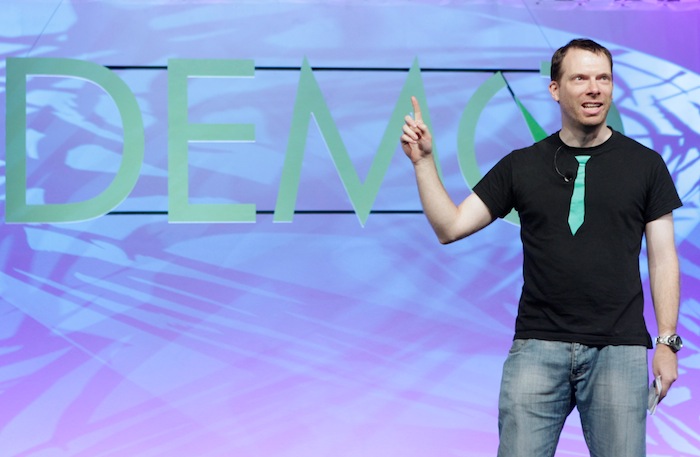 SANTA CLARA, Calif. — It’s not easy being green, Kermit the Frog sang. A startup called Sure has a way to make it easier: Give people points for making green lifestyle choices.

The Sure system, which launched today at DEMO Fall 2012,  is designed to help individuals, companies, and even whole cities reduce their contributions to greenhouse gas emissions. At every level, people get points for making more eco-friendly choices: buying organically-made bread, riding bicycles instead of driving cars, or using compact fluorescent lighting and environmentally-friendly manufacturing processes. And if you get more points, you qualify for discounts on future purchases.

In other words, Sure makes being green into a sort of game. But here’s where it gets interesting: You can gain more Sure points by frequenting businesses or working for companies that have a lot of Sure points, or by living in a city with a lot of Sure points. Conversely, companies get Sure points for having lots of employees with eco-friendly lifestyles, and cities’ scores rise if they have lots of residents who have high scores.

In short, the system aims to make the interconnectedness of a planet into a system for scoring points. If it gets widespread enough, you won’t have to conduct extensive research into a restaurant’s green credentials before you order the free-range chicken special there: You’ll be able to tell from the establishment’s Sure score that it sources its ingredients from eco-friendly suppliers. 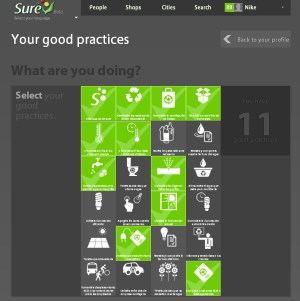 Above: Sure depends on your self-reported habits to give you an eco-friendliness score

Sure is a project created by a startup called Sustainable Reference, which was founded by Andy Bäcker in Barakaldo, Spain in 2009. The company has just opened a U.S. branch in San Francisco, as of August, 2012, and plans to expand into the U.S. market. It has $1 million in backing from grants, loans, and private investors.

“I love the planet and the beings who live on this planet,” Bäcker said in an email to VentureBeat. “I believe that many solutions are already out there, and it’s a matter of knowing what’s available and offering value propositions so as to have each individual part do its best in terms of trying to connect with the best possible match. Almost like applying an intelligent magnetic coating where the compatible parts get attracted to each other.”

While individual actions are important, it is ultimately strength in numbers that have the greatest impact.

“One person on their own can’t solve the problem our planet is currently facing,” said Bäcker during his DEMO presentation. “We want to make sustainability contagious, the world is counting on it.”

Sustainable Reference will have several huge challenges in implementing its ambitious vision. Certifying various claims in order to award Sure points will be difficult.

Sustainable Reference plans to offer various levels of certification, from self-reporting all the way up to independent audits, but implementing that in a clear and manageable way will be a significant challenge for the company.

“If you are asking people to go back in and constantly update what they did, what they purchased, or when they turned off the lights, I don’t see that becoming mainstream,” said Josh Elman of Greylock Partners.

Second, it’s a system that’s unlikely to work very well unless widely adopted — but many people won’t use it unless they know it works well and see the Sure scores of products, companies, and services often enough that they’re actually able to use those scores as a decisionmaking tool. In other words, there’s a bit of a chicken-and-egg problem here.

Finally, Sure has an unfortunate name, which it shares with a popular deodorant brand in the U.S. That will make Googling it more difficult than it needs to be.

Still, Bäcker’s optimism is powerful, and he may be onto something with the notion of making a game out of the interconnectedness of this world. And Sure’s ambition is breathtaking: It aims to reduce worldwide CO2 emissions by 1 percent by 2016. If it succeeds at that goal, Sure will have definitely made a difference.

Check out the company’s introductory video below.

Sustainable Reference is one of more than 75 companies chosen by VentureBeat to launch at the DEMO Fall 2012 event taking place this week in Silicon Valley. After we make our selections, the chosen companies pay a fee to present. Our coverage of them remains objective.