When it comes to the iPhone’s screen size, Apple has stuck with a simple idea over the last few years: bigger isn’t always better.

But tomorrow, that could all change.

The company is expected to unveil two new iPhones at its blowout media event on Tuesday: a 4.7-inch model, which would serve as a solid upgrade over the iPhone 5S’s display, and a 5.5-inch model, giving Apple an entry into the growing “phablet” market, that is, smartphones so big they might as well be tablets.

A 4.7-inch iPhone 6 wouldn’t come as a huge surprise. That’s a display size that’s still below most of the competition today, and it could be comfortable for people with small hands (like last year’s similarly-sized Moto X).

A 5.5-inch phablet, on the other hand, would be entirely new territory for Apple. It would prove that Apple is finally gearing up to fight the competition directly, something it’s had the luxury of avoiding up until now.

But, if the rumors are true, Apple also has picked the perfect time to jump into the big-screen market. 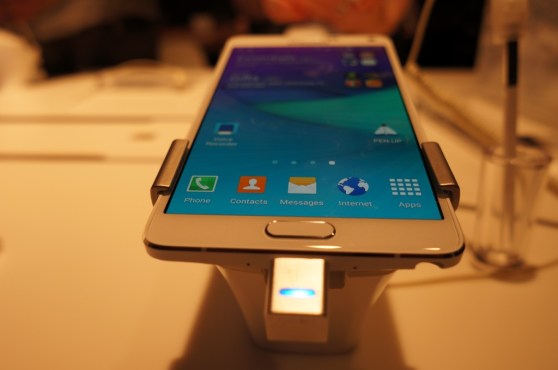 Big phones have actually slimmed down a lot

I didn’t have much faith in phablets when Samsung’s Galaxy Note kicked it off two years ago, but the category has come a long way since then. While they were initially large and unwieldy, smartphone makers are now doing a decent job of slimming them down and making them easy to use (take the Galaxy Note 4 for example). You’ll still need two hands to wield a phablet, but now at least they can slide into your jeans easily.

Apple can now benefit from all of the hard lessons Samsung, HTC, and others have learned from their first forays into phablets.

Phablets can last you more than a day

On top of the obvious benefit of having larger screens, phablets also have room to include bigger batteries than typical smartphones. That’s a natural requirement for any device with a big screen, but phablets still manage to have more than enough leftover power to keep you juiced throughout the day.

A typical phablet often lasts me around a day and a half with normal usage, while most smartphones often last around a day. For iOS users who need plenty of battery life, a big-screen iPhone will seem like a logical upgrade.

Above: Samsung’s Galaxy Note 2 compared to the iPhone 4S

Apple stuck with the iPhone’s original 3.5-inch display size up until 2012’s iPhone 5 launch, when most Android screens were already well past 4.5-inches. And both the iPhone 5 and iPhone 5S sported 4-inch displays, even when flagship Android phones sported screens around 5-inches. (Apple ended up cramming in more pixels in its smaller screen to create the sharp “Retina Display,” but it wasn’t too long until Android competitors did the same.)

As a company that’s always tirelessly devoted to design and user experience, it made sense for Apple to stick to smaller screen sizes for so long. It made the iPhone easier to use with one hand, and many of the competing big-screen phones ended up being usability nightmares.

But now that iOS growth appears to be slowing and Android’s marketshare continues to grow, according to the most recent IDC stats, Apple can’t be as reactive as it used to be. It may seem out of character for Apple to jump into the big-screen phone market so quickly, but demand for phablets is continuing to grow (Juniper Research expects over 120 million phablets to be shipped by 2018), and Apple is in a weaker position than it’s been for the past few years.

A phablet could help make up for lost iPad sales

At this point, Apple CEO Tim Cook is probably tired of making excuses for slowing iPad sales. He’s pointed to inventory reduction issues as one reason why iPad sales may have slowed, but at this point it’s unclear what’s really happening. One possibility that Apple must be afraid of: Consumers just aren’t buying as many iPads as they’ve used to.

A big-screen iPhone could be one way to make the iPad decline hurt less. Apple would be able to charge more for such a device, and it could also satisfy the demand for consumers who want a bigger screen than a typical smartphone, but who don’t see a point in buying a separate tablet.

A big iPhone could also be the perfect iWatch companion

One of the biggest issues with phablets today is that they’re far more awkward than smaller phones for simple tasks, like just glancing at the time or your most recent notifications. And you can forget about taking them out for a quick run.

One potential solution: Apple could position the iWatch as the ideal device to take care of those more mundane tasks, while the big-screen iPhone could something suited for more intensive tasks, like sorting through your e-mail or doing heavy web research.

It’s not the most elegant solution (which seems heretical for a company that’s focused on elegance). But such a pairing could allow Apple to prove the usefulness of both its smartwatch and giant iPhone.