In fact, Pétursson and his team are pushing onward to do bigger and better things.

Last week, CCP and London-based tech startup Hadean hosted a battle with 10,000 spaceships taking part. EVE: Aether Wars was a tech demo, undertaken so that the companies could see just how much the simulation could support. A total of 14,274 ships took part, with more than 3,852 players battling each other. Concurrent combatants peaked at 10,412. 88,988 ships were destroyed.

The event showcased the power of Hadean’s Aether Engine, a distributed simulation engine powered by Microsoft Azure. Over time, Pétursson hopes that the tech will become a routine part of the game. At the Game Developers Conference last week, I talked with Pétursson about the tech demo as well as what it’s like to work with Pearl Abyss. 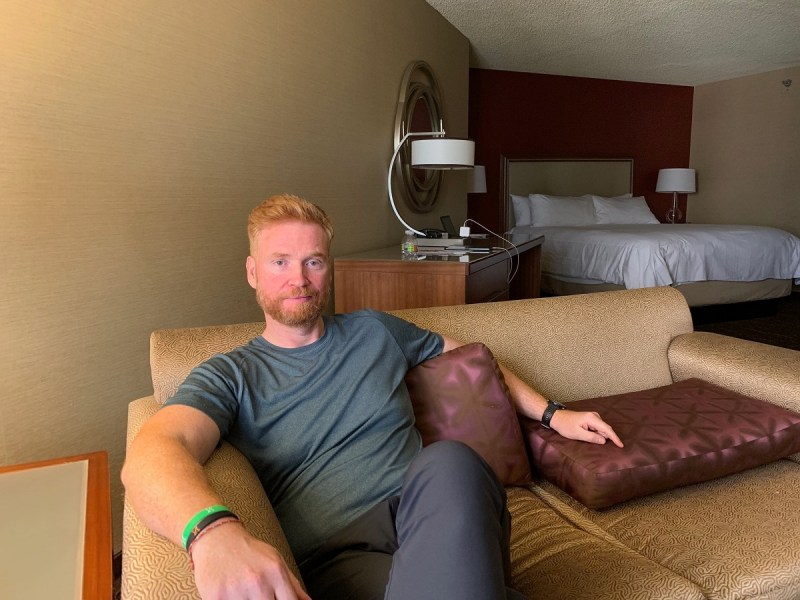 Above: Hilmar Veigar Pétursson is CEO of CCP Games.

Hilmar Veigar: What we’re doing with Aether Wars, that’s interesting tech. We’re doing a test tomorrow with a U.K. company called Hadean, which makes backend solutions for big simulations. We’ve been working with them on doing a space sim experiment. We’ve gotten 20,000 EVE players to sign up and join it. We’re hoping for 10,000 of them to log in tomorrow and have the biggest fight ever.

We had the biggest fight ever in EVE Online last year, where we had 6,400 people in one internet battle. We’re hoping for 10,000 now. I expect we’ll learn a lot about the capabilities of the technology, some of the things we need to focus on and so on. I’m hopeful that, out of this, we will find, as I call it, the next age of technical evolution for EVE, where we’ll be able to replace the simulation engine underneath EVE Online, which has been running there for 17 or 18 years, since when we first put it together. Obviously it has a lot of compromises from way back when. We were making it for Pentium III dual-processor servers.

Pétursson: It’s held up amazingly well, but there’s an end of life for everything. Even though it’s holding up nicely, it’s not well-built for this scenario where thousands of people come together to fight. I think 6,400 is about the limit of what it can handle. We’re hoping that this experiment will provide us with a new path to take.

GamesBeat: I always thought that some of those battles were orchestrated by players. In this case, are you guys pushing them all together?

Pétursson: In this case, yes, we’re pushing them all together for the purposes of the experiment. But a fleet fight in EVE Online is organized by the players. We have very little involvement, other than just doing our best to have the tech work. It takes an amazing amount of social organization to orchestrate something like that. It’s something EVE players have been specializing in for decades. I don’t think anyone else could do it. It’s very much their record, this fight we had last year. We just provide the platform for them. 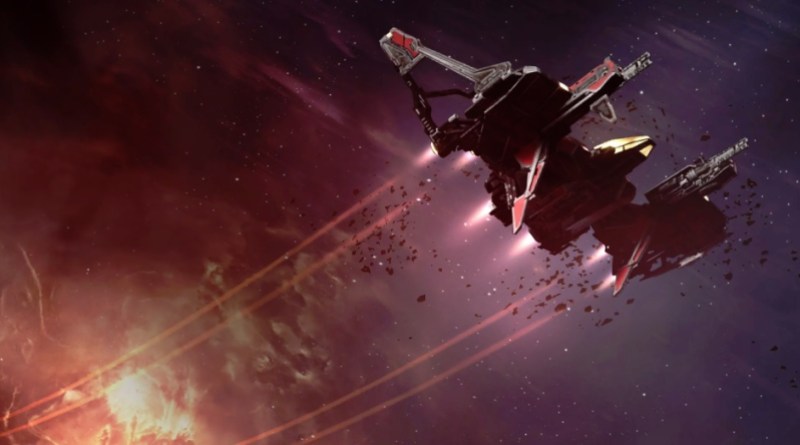 GamesBeat: How are you coordinating this test?

Pétursson: We had people sign up and we’ve set a specific time. People can download the client, log in, and go straight into the fight. It’s an all-out deathmatch with very little rhyme and reason to it. You’re just shooting randomly. It’s not really designed to be a game per se. It’s more of a technical test for this backend engine. It’s been a joy to work with Hadean and see if we can break our own record.

GamesBeat: This was built in the days when you still had shards, right? Servers where you had a limit to how many people could be playing together.

Pétursson: Absolutely. EVE was always designed to be single-shard, but obviously behind the scenes, every solar system is a server in a way. That’s kind of the limit. One solar system can run on one CPU. The actual simulation code is single-threaded, which was fine back then. Now we have multi-core computers and much different server architecture than before. It’s a challenge for our old system to benefit from that. This new way of doing things with the Aether engine allows us to harness a lot more of the power of current servers.

GamesBeat: Along the way, did you ever take advantage of something like Amazon Web Services?

Pétursson: A part of the overall infrastructure runs on AWS. Our websites, payment platforms, those kinds of things. But the core simulation largely runs on an architecture we built those decades ago.

GamesBeat: Are you looking to shift over in this age of cloud gaming?

Pétursson: There are many different aspects of what cloud gaming means. It’s often hard to pick a part of what people are referring to when they talk about cloud gaming. What Google announced has more to do with streaming than cloud per se. Most games, in a way, run on some form of a cloud. EVE Online runs on our own servers, but still, it’s in the cloud. The game happens on the backend, not on the client.

A streaming solution like Stadia would benefit EVE. You wouldn’t need the computer. You could play it on a TV. That’s super cool. What we’re doing with Hadean and what Google is doing, it’s two very complementary things. These things combined can allow you to orchestrate some pretty cool stuff. One of the elements of the fleet fights in EVE, the real ones, is that people are interested in getting into them, but if you were to tweet about them — “An EVE fight is going on!” the path to joining it–you have to download the client, create an account, find where the battle is taking place, and so on. I’ve often talked about the concept of deep linking, where if a fleet fight was going on, you could tweet a link, people could press that link, and they could immediately be there. 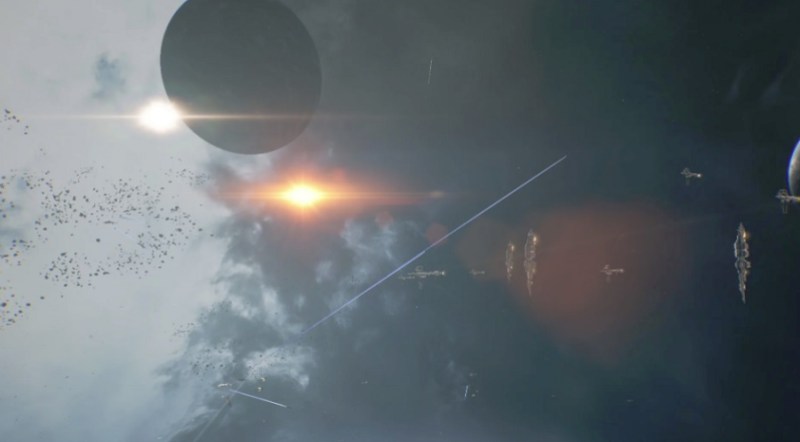 Pétursson: Absolutely. Orchestrating something like that–I’m watching a Twitch stream or seeing a Tweet, I could click a link and be right there. I think a lot of people are curious about joining an EVE fleet fight, but they’re daunted by the many, many steps required to get in there. I’ve often fantasized about something like a Hunger Games experience, where you as a viewer could influence what’s going on inside a large fleet fight in EVE Online. That could have a mainstream impact. You’re watching a magnificent space battle happening in EVE Online, and as part of the audience you could send in those little parachutes.

I’ve long had that fascination–how could we allow people to interact with a fleet fight without having to be an EVE player with a spaceship and all that. Having this audience interaction, like you’re endorsing a team and sending them help, boosting them up. I look forward to a time where you could watch 10,000 EVE players playing, and then 100,000 people in the active audience could participate without being in a spaceship fighting.

GamesBeat: Could you also somehow get around any limitation on the number of players?

Pétursson: With the technology evolution we’re testing, the Aether engine, we could potentially get to something like 100,000 players.

Pétursson: Yes. If we’re able to pull this off, where we take EVE over to this new way of running the simulation, we could go to 100,000 people as part of the simulation. We could do something like this audience participation thing, but there are limits to what we can scale.

GamesBeat: Could you still, at some point, make use of things like Stadia for that part?

Pétursson: We could absolutely do that. We’d benefit from Stadia even with the old stuff. It’s just the number of people that could participate in it would be limited by the constraints of the simulation engine. If we pull this off with Hadean — or when we pull this off, I say hopefully — with these two things combined, you’ll now have the ingredients for getting 100,000 people to participate in something synchronous like an EVE fleet fight. That would be amazing to pull off. 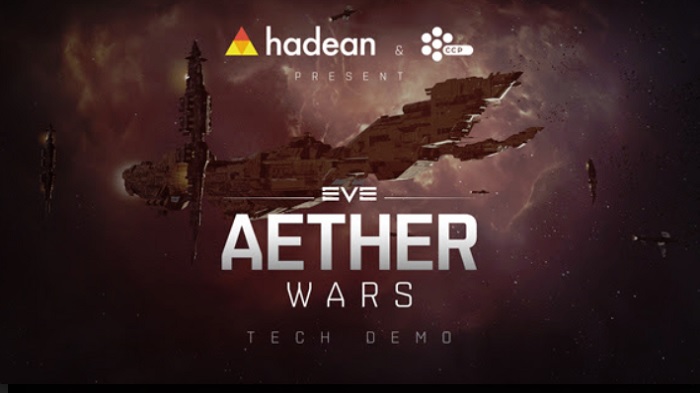 Above: EVE: Aether Wars is a tech demo.

GamesBeat: What else are you finding under the new ownership as far as what you can do?

Pétursson: It’s a big difference, being partnered up with a gaming company as opposed to being financed by investors. It’s just different goals and priorities. Overall it allows us to think more about the long term. We have a much more sophisticated counter-party when we’re discussing company strategy and so on. Pearl Abyss is deeply committed to MMOs. They have their own MMO. There’s just something about talking MMOs with MMO developers. It’s a much more sophisticated dialogue than talking MMOs with investors.