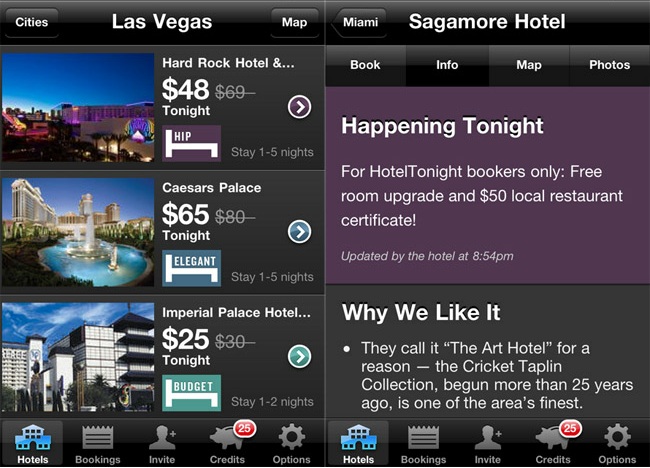 Discount hotel app HotelTonight announced $23 million in funding yesterday. It’s the kind of deal company I can get behind. (Disclosure: HotelTonight provided me a $100 credit to try the service.)

HotelTonight offers deals to last-minute travelers through iPad, iPhone, and Android apps. It’s an exercise in simplicity: Launch the app, select a city, and you see which hotels are available for the night and their prices.

HotelTonight offers a service that works for all three parties:

* Consumers win because they can quickly find and book inventory at discount prices.

* Hotels win because they can fill rooms that would otherwise go empty and generate some revenue instead of none.

* HotelTonight wins because they can collect a reasonable profit on each transaction. (Unlike daily deal companies, which try to take 50% of revenue, HotelTonight’s typical take is 20-30%.)

Each day, hotels enter their inventory for the night and the next few days for HotelTonight. At noon local time, these are released to the public.

Hotels are something I know quite a bit about. From June 2011 through January 2012, I was homeless and lived exclusively in hotels. During the past 10 years, I’ve probably spent at least four years living in hotel rooms.

Economically, HotelTonight’s model is a much better model than Groupon Getaways (Disclosure: I have puts against Groupon) and LivingSocial Escapes, which don’t reflect the realities of the hotel business in 2012. The key thing to know about the hotel industry is that the same hotel room can go for $125 one night and $525 another night. It all depends on demand. If there’s a big conference in town or if it’s Mardi Gras in New Orleans, rooms are going to be sparse and prices high. If it’s August in New Orleans, rooms will be cheap.

If you price daily, you can reflect the market conditions.

What Groupon and LivingSocial try to do is have one price that, in theory, is good for a period of months. But their deals are subject to what the industry calls “availability.” That’s not what most people think of as availability — it doesn’t mean that a room is available. It means that the hotel is empty enough that it’s willing to let a customer use a Groupon or LivingSocial voucher. This leads to arguments when customers think they should be able to use a voucher but they can’t. It’s a goofy model that shouldn’t exist in 2012. (It exists in part because Groupon and LivingSocial haven’t done the work of tying into hotel systems to do date-specific, inventory-based pricing.)

With HotelTonight, if you book, you’ve selected your dates and you’re guaranteed a room at that price. (Despite the name, HotelTonight offers multi-night stays. But the stays must start the night you book.)

“HotelTonight does not require any particular rates or discounts from hotels — hotels are incented to discount on our channel only to the extent of their particular need on a given day,” HotelTonight CEO Sam Shank told me. “Ultimately, HotelTonight is much less expensive for hotels, so they can put that savings into greater discounts or keep it to boost their bottom line.”

According to a survey by TravelClick, 38% of hoteliers who had used deal sites like Groupon, “found it less successful than they had hoped and do not plan to use a flash sale site again.” 27% would run another deal.

I’ve checked HotelTonight rates on a variety of recent trips. One of my big concerns about HotelTonight was that, because it’s a small player, it wouldn’t have inventory during big events. But I’ve been pleasantly surprised. It had rooms during every day of JazzFest in New Orleans. I was in Boston this week and nearly every room in the city was sold out because of a conference. But HotelTonight still had rooms. Because the economic model works for hotels, they are able to make inventory available during periods of tight demand. These are times when letting a Groupon customer use a voucher would make no sense. The rooms weren’t cheap, and they did eventually sell out, but at least it was an option.

Beyond a better economic model, Shank believes that HotelTonight can bring a better quality customer to hotels than bargain-basement sites. Hotels are interested in people who will generate ancillary revenue on property, such as food and beverage, spas, and parking versus people who just want a cheap room.

The app itself is visually stunning, especially the iPad app. It includes detailed information about the hotels and their features.

In addition to the model and the app, I’m a big fan of Shank.

I’ve met him several times. HotelTonight reached out to me after I chastised the company in a tweet about a confusing aspect of its interface that implied prices were lower than they were for multiple night stays. They’ve since vastly improved the interface, and pricing is much clearer. Shank clearly knows every facet of the industry he is tackling.

HotelTonight is also well-positioned to do personalized pricing and help hotels attract influencers. Between selling a room for $200 to a nobody or selling a room for $149 to someone who will tweet about the property and influence visits by others, many hotels would prefer to sell that room to the influencer.

The concerns I have about HotelTonight are the size of the same-day travel market and fierce competition in the travel space.

Because stays always start on the same night, it limits the market. Many of my trips are booked several days in advance, and I like the certainty of knowing where I’ll be staying. Despite the $100 credit to try the service, it hasn’t yet fit with my travel plans.

“Historically, approximately 15% of reservations are same day,” Shank said. “We feel this number will grow as consumers turn to the convenience of last-minute, spontaneous bookings.”

HotelTonight is going up against Expedia, Travelocity, Orbitz, Hotwire, Priceline, and a whole host of smaller players in the travel space. (Disclosure: I have a bet with Reuters finance columnist Felix Salmon relating to the value of Priceline.) Many of them have significantly greater buying power. Developing a simplified app that focuses on same-day bookings under a different brand is something they could readily do. Priceline has already modified its booking app to feature same-day deals.

“HotelTonight’s hotel-facing tools are more responsive in real time,” Shank said. “Hotels are actually willing to give us much more inventory at the last second, knowing that if the environment changes, they can make adjustments on the fly. Ultimately volume matters, and hotels tell us that HotelTonight consistently produces more same-day bookings than the traditional online travel agencies.”

The big question that remains: Will HotelTonight offer tuck ins?