Facebook faces some real challenges when it comes to keeping up its growth pace, as I covered yesterday. But I’m still bullish on the company, and here’s why.

Facebook has a connected audience like no other. Its social graph connects 845 million people around the world through 100 billion connections, according to its S-1.

That’s not an easy thing to replicate, as Google is finding out as it struggles to get traction for Google+. Users won’t switch to a new social network on their own; they need to get the key people in their lives to switch too. My friend Kristin tried using Google+ at my insistence (see my first-use interview with her), but a key barrier for her is that her mom is now on Facebook. She hasn’t posted on Google+ since July.

Less obvious than the explicit friend connections is that Facebook knows the strength of your bonds. People who you interact with a lot show up more frequently; the random ex-girlfriend from high school recedes into the background. You don’t have to do anything explicit to make it happen; the data that Facebook automatically has creates a better experience. Competing services would have a hard time replicating that.

Not only does Facebook have a lot of users, they use the service a lot. Two weeks ago, Google put out some statistics that could easily be incorrectly interpreted as meaning that 60% of Google+ members use the service daily.

Facebook’s real numbers actually come very close to Google’s deceptive numbers. Facebook is seeing 57% of its users accessing the service on a given day. In December, 42% of users were using Facebook 6 out of 7 days. 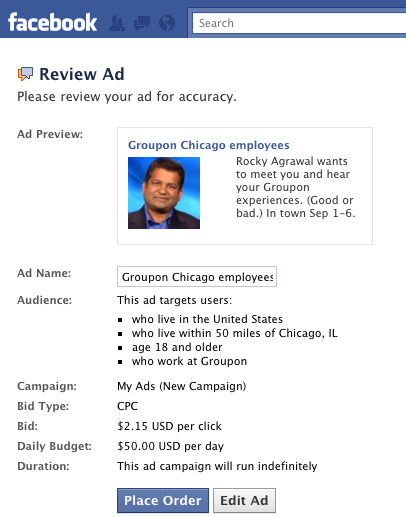 Historically, two of the largest problems with online advertising have been the lack of scale and the lack of visual impact that television can provide.

The lack of scale problem has essentially been flipped on its head. It’s now easier to reach 40 million people with Facebook than it is with television. A top-rated TV program can’t reach that many people. The Super Bowl is the only event that can reach more people than Facebook can in a day.

The current Facebook product isn’t the best positioned for visual impact because it doesn’t have a video product comparable to YouTube; but that may change over time. Still, you can click to initiate a video interaction.

There are significant structural reasons why the offline to online transition doesn’t happen faster. But some of those barriers are crumbling.

Proctor & Gamble, the biggest advertising spender in the United States, made headlines recently when it announced it was cutting marketing spend.

According to P&G’s CEO:

In the digital space, with things like Facebook and Google and others, we find that the return on investment of the advertising, when properly designed, when the big idea is there, can be much more efficient.

This transition will help both Google and Facebook. And both companies will become even more competitive with each other.

It took me less than 10 minutes to set up. Within a couple of days, my ad reached about 650 Groupon employees and resulted in several meetings. There is no other ad product out there that can deliver that kind of reach and targeting so quickly.

That may sound like a ridiculous edge case. But as consumers and small businesses understand the power of Facebook’s ad platform, I expect we’ll see more such ads. (I thought about running a campaign opposing SOPA targeted at people who lived in Washington, D.C. and worked in Congress, for example.)

The discussion has focused on how this is a bad thing and flies in the face of good corporate governance, making the company less responsive to its public shareholders.

I lived the other side of that at AOL. During my time there, the company was overly responsive to the market and aggressively managed quarterly numbers. The AIM buddy list was the original social graph. We built and patented a news feed. I specced out a mechanism for sharing the buddy list with third-party sites two years before Facebook Connect launched.

But we could never get support from management to go deep on social. As my boss later told me, “I was running a $500 million business with 90% margins and senior leadership wouldn’t let me spend $1 on innovation.” The money was needed to make the quarter.

If that’s what you get when you listen to the market, I’d much rather have a product visionary like Zuckerberg making the calls. Having the flexibility to ignore quarterly ups and downs is critical to innovation.

To believe or not to believe

In the months leading up to Facebook’s first tick, the debates about whether Facebook is worth its valuation will rage on.

If you were to base your assessment solely on historical growth rates and trends of Facebook’s existing businesses, it’s incredibly hard to justify a valuation of $75 billion to $100 billion. You have to fundamentally believe that Facebook will change industries and create new markets.

What I’m excited about is what Facebook can do with the users and the network they’ve created. I can think of at least six adjacent multibillion-dollar businesses that Facebook would do well at.

Here’s a quick test: Read Zuckerberg’s letter to potential investors in Facebook’s S-1. Do you think it’s just a bunch of marketing and PR fluff? Or do you believe that it really is his vision for the future and that Facebook can execute on it?