What if you could invest in a startup that competed in an established $10 billion market where the existing players were unlikely to counter its innovation for several years? And that startup’s revenue was projected to exceed $1 billion within a decade, be cash flow positive within 4 years, generate as much as a 100x return on investment, have proven technology already in place, and, oh by the way, also could save as many as 10,000 lives annually?

A cross-section of many business leaders, entrepreneurs, investors, and public health experts recognize the opportunity. And yet, no one is stepping forward to invest in new smart gun technology, which describes weapons that can only be fired by the authorized user. The technology would significantly reduce the many thousands of deaths caused by childhood firearm accidents, suicides involving third-party firearms, and criminal acts perpetrated using as many as 500,000 stolen guns annually.

Gun violence is one of our nation’s most significant and vexing public health problems. Wherever one stands on the political spectrum of the gun debate, all are saddened and sickened that almost 34,000 Americans die from firearms annually. It’s a sobering and staggering toll, especially when one considers that since January 2000 over half a million Americans have died from gun violence, more than all U.S. combat deaths combined since the end of the Civil War. Despite the ongoing carnage, meaningful gun legislation is not likely to pass anytime soon. The good news, though, is that the stars may be aligning for a technology-based solution.

Smart guns have been a theoretical option for almost twenty years, but a combination of factors has prevented their broadscale adoption. In the late 1990s, the Clinton Administration convinced Smith & Wesson to invest in new smart gun technology, but the project was squashed when gun rights extremists threatened to boycott the venerable firearms maker. Then, in 2003, New Jersey passed the Childproof Handgun Law, which mandated that all guns sold in New Jersey must be smart guns, within 30 months of the sale of a smart gun anywhere in the country. This, too, offended the gun rights crowd, who, not surprisingly, didn’t like being told what type of gun to buy. 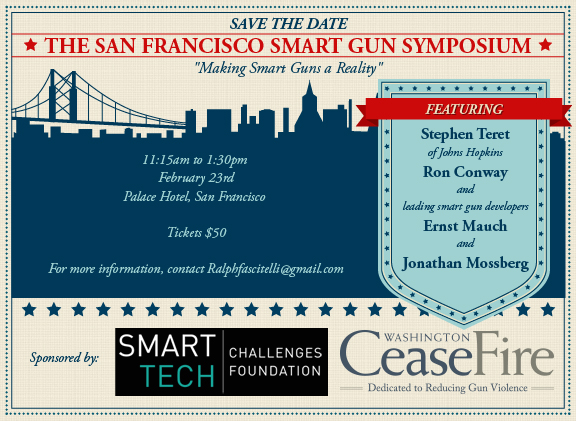 Above: Flyer for a smart gun event held in San Francisco on February 23, 2016.

Along with its legislative effort, New Jersey also provided millions in grants to the New Jersey Institute of Technology to develop a biometric smart gun. Biometric smart guns, which recognize the owner’s thumbprint, got the lion’s share of attention for over a decade. However, they proved to be insufficiently reliable for police officers, who often grip a gun with hands that are sweaty, muddy, or even bloody. Each of these situations can create shadows that interfere with the effectiveness of the biometric reading.

Proven and established RFID technology appears to be emerging as the more reliable approach. One company in Germany, Armatix, has successfully developed an RFID smart gun, the .22 caliber iP1.  But while Armatix got the technology right, they got the price wrong: an exorbitant $1,800.

Despite these potholes, there is reason to believe that a 9mm RFID smart gun developed for law enforcement could be on the market within two years. A larger 9mm caliber would appeal to, and could be sold directly to, the strategically important law enforcement sector. There are almost 20,000 different police entities across the country, representing almost two million public and private security personnel, a commercially significant market.

Law enforcement leaders across the country are interested in testing smart guns for their departments. The list includes San Francisco Police Chief Greg Suhr, King County (Washington) Sheriff John Urquhart, and Richard Beary, president of the International Association of Chiefs of Police, all of whom have given smart guns strong endorsements, as have the president and vice president of the United States. This is not surprising: A major nightmare for many in law enforcement is having a criminal take away a police officer’s gun while being apprehended and use it against the officer, something that happens all too often.

Perhaps most significantly, the New Jersey House and Senate have recently agreed to amend the Smart Gun Mandate to the likely satisfaction of the vast majority of both sides of the gun debate. Further, a new study of almost 4,000 households by John Hopkins showed that 43 percent of current gun owners would consider buying a smart gun, and another 33 percent are undecided. Given that 7 million handguns are produced annually for the U.S. market, this suggests a $2 billion market, as well as the creation of thousands of new jobs.

All of this points to a big question: Why aren’t investors writing checks to smart gun entrepreneurs?

There’s Ernst Mauch, developer of the Armatix RFID smart gun in Germany and former CEO of German firearms manufacturer Heckler and Koch. (Mauch designed the gun used to kill Osama Bin Laden.) He recently left Armatix, and he told me that he has assembled an eight-person engineering team and is hoping for financing to come together. Mauch estimates he would need a $10  million investment to fund two years of development and testing, as well as the first two years of product launch. He expects marketing costs would be minimal, given the free publicity that comes with anything related to guns and that the company would focus tightly on direct sales to law enforcement.

Taking a seed approach is San Francisco’s Smart Tech Challenges Foundation, which aims to foster innovation in firearm safety. Two years ago, backed by Silicon Valley Investor Ron Conway, the foundation launched The Smart Tech for Firearms Challenge to grant $1 million to innovators who develop user-authentication features for firearms. Grant recipients include entrepreneurs like Kai Kloepfer, who is designing a fingerprint-access Beretta pistol, and Chloe Green, who is designing a location-aware gun magazine to help keep schools safe.

It’s clear that traditional American gun manufacturers, such as Colt and Smith & Wesson, aren’t willing to jeopardize their existing business at a time when gun sales continue to be brisk. However a poll last year by the national research firm of Penn, Berland and Shoen shows that 87 percent of gun owners want gun dealers to stock smart guns. For now, neither the NRA nor the National Shooting Sports Foundation (NSSF) nor The Second Amendment Foundation are on record as being against smart guns. They claim their prime concern is reliability, a situation that would certainly have to be addressed if law enforcement were the initial customer.

It may be difficult to convince older gun owners to give up their traditional handguns. But between acceptance by law enforcement, younger gun owners who trust technology, and gun-owning families with children, it’s easy to foresee a rapid adoption rate for smart guns. Indeed, many of us in the gun safety movement look forward to the time when public opinion would consider it downright negligent to own a “dumb gun.”

But apart from the societal aspect, the smart gun opportunity makes business sense. Savvy investors understand that timing can be everything. It appears now that the clouds previously surrounding the smart gun debate — involving market acceptance, technology glitches, and clumsy legislation — are now being cleared away, and a one-of-a-kind investment opportunity may be the result.