When Western game developers look at China, they see a market that could hit nearly $38 billion this year (as market research firm Newzoo estimates). But they also see millions and millions of people who are eager for new games, looking for experiences they may never have encountered before.

Wizards of the Coast knew this a decade ago when it first brought Magic: The Gathering to Chinese players. Sure, they’d been playing with imported and black-market cards before this, but official, localized cards showed their players that Magic wasn’t just for people in the West. It was for China, too.

And that’s part of the reason why Wizards picked Tencent as its partner for Magic: The Gathering — Arena. It’s going to be the most direct translation of Magic ever made for digital, and it’s the company’s first game from its new internal studio. It’s also going to be its first official partnership with Tencent, the biggest game company in the world. Since the late-April announcement with Magic, Tencent has made deals for Path of Exile studio Grinding Gear Games and is overseeing the Chinese relaunch of Ubisoft’s big online success, Rainbow Six: Siege.

I recently interviewed Wizards of the Coast president Chris Cocks on the choice of Tencent. Here is an edited transcript of our interview.

GamesBeat: Is this the first time Wizards has done a deal with Tencent?

Chris Cocks, Wizards of the Coast president: I believe it’s the first deal Wizards had done with Tencent. Hasbro [Wizards’ parent company] has a history of working with them.

GamesBeat: Why Tencent instead of NetEase or another company?

Cocks: Partnering with Tencent is a pretty easy choice. They’re by far not just the biggest publisher in the world but in China and Southeast Asia. They have fantastic marketing platforms and user platforms, particularly with their WeChat platforms and WeGame platform, and they’ve got a partnership and ownership stakes with some of the biggest esports platforms in the world.

So in terms of everything we want to do with Magic, in terms of introducing it to many more people, to drive it as an esport, and introduce it to new regions, Tencent came to the table with a total package.

GamesBeat: Magic has never been as big in China as it is elsewhere. Is it because their players like other games, or is it because it’s expensive to get into it?

Cocks: Magic’s been available in China for 10 to 12 years. That’s how long we’ve been localizing it. It was our No. 1 market for our digital product, Duels of the Planeswalkers, by far and away. I think we had something on the order of 2-3 million players of that game over the years. Our store network in China tends to be a bit smaller and concentrated in tier-1 cities, so I think we’re just in a development phase in China.

What we’ve seen with Duels of the Planeswalkers indicates there’s an audience for Magic, particularly if you can give them a platform that they like to play on and is successful to them. Other CCGs, like Hearthstone, have shown good success when they get on the right platform and have the right publishing partner [Blizzard works with NetEase in China — Ed.]. China is Hearthstone’s No. 1 market as well [Blizzard would not confirm this — Ed.].

GamesBeat: Besides Neverwinter and Duels of the Planeswalkers, what other video games based on Wizards IP are in China?

Cocks: I think those are the published games in China right now. We have a number of games in development through our internal studios and our partners that will likely be in China and Southeast Asia, but we haven’t announced all those yet.

GamesBeat: Is the Magic: The Gathering — Arena beta in China now?

Cocks: Not there yet. The go-to-market process is doing a closed beta with the government for testing. They test a variety of aspects of the game before approved for general public. That will be something we will work with Tencent on, and then once through the vetting process, it will then go through a closed beta, an open beta, a soft launch, then a full launch.

GamesBeat: By the time you hit this point in China, do you expect Magic will be on mobile?

Cocks: Yes, Magic will be on mobile. Arena is built on PC first, but it’s being built using Unity platform. We can take it to multiple platforms; we can take it onto consoles, iOS/Android, PC, and Mac. Our intention is to do that over time starting on PC and seeing what players think about it and picking future platforms as we see demand.

GamesBeat: After the ruling on loot boxes in shooters being gambling in Belgium, are you worried that other regulatory agencies will see card packs as gambling?

Cocks: We monitor everything going on in the gaming industry. We always want to do the right thing both for consumers as well as governments. I can’t talk to the Belgium authorities, but the Dutch authorities determined tradable card games — I think they were referencing Pokémon at the time — didn’t have an issue, and we certainly believe Magic is a game of skill, similar to chess, and all the feedback we’ve heard indicates that’s how the games are thought of.

GamesBeat: Duals of the Planewalkers, you said, had some success in China. What have you learned from it when it comes to localizing a game for the Chinese market?

Cocks: One of the first things we’ve learned is it’s great to have a partner that really understands the market, really understands the consumers, and has platforms that deliver that product to consumers. That’s why we don’t go the self-publishing route for Arena or future games we have coming out. Tencent has a great history of taking originally developed games as well as games from outside the Chinese market and using their expertise to make them successful — that’s probably the biggest thing we’ve learned. 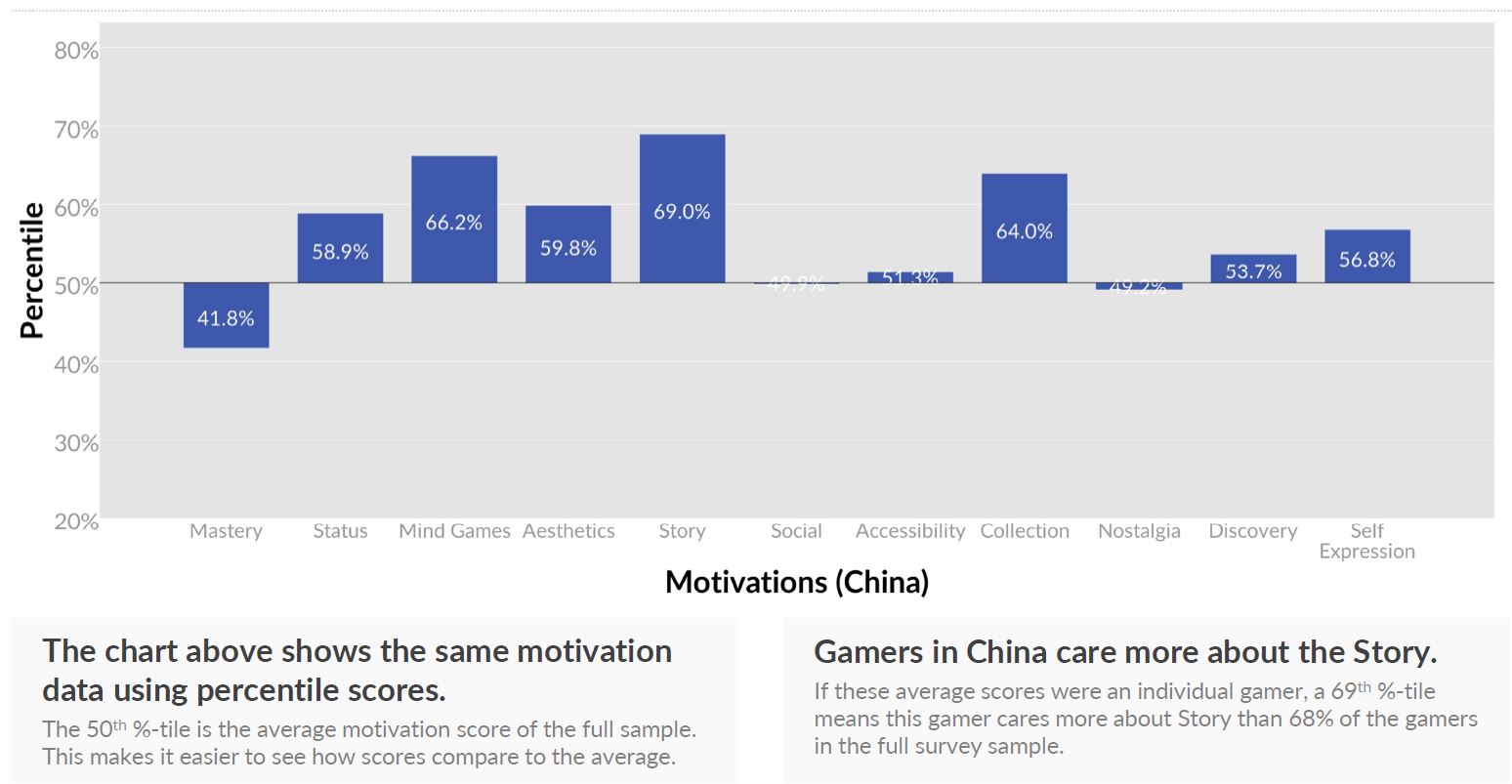 Above: How Chinese players approach Magic in China.

GamesBeat: What playstyles do Chinese players gravitate toward?

Cocks: I’m going to defer an answer to that question and hook you up with Tom George, who’s the head of our consumer research team. … But I do know that blue/black is the most popular combination, and that’s across the world. I do not like to play against blue/black, personally. I tend to be more of a midrange or aggro/tempo player than a control player.

Tom George, Wizards of the Coast director of consumer insights: We’ve been researching the gaming motivations of Magic players for a while, working with the team at Quantic Foundry who are experts in researching gamer motivations. Similar to the findings shared by Niko Partners, working with Quantic Foundry, in early April [source] regarding the gaming motivations of PC and mobile gamers in that region, Magic players in China are motivated by Community, Competition, Completion, and Challenge to a greater degree than the typical Magic player.

However, we do see some distinct differences in the motivations of Magic players in China versus those of PC and mobile gamers in that region, particularly around the factors related to Immersion (Fantasy, Story) and Creativity (Design, Discovery). Magic players in China have indicated that these factors (Fantasy/Story, Design/Discovery) are more likely to influence why they play Magic compared to the typical Magic player (greater than 50th percentile ranking among Magic players).

GamesBeat: If this goes well, would you want to partner with Tencent for the upcoming Warriors of Waterdeep in China?

Cocks: Warriors of Waterdeep is licensed by Ludia. When we license out games, it’s up to the publisher with deciding on other markets, depending on what rights they’ve secured with us for the license. For this deal with the Magic brand, Magic Arena is just the start. We also have a to-be-announced more mobile-optimized game that’s part of this deal. My hope is that things will work out really, really well with Tencent — we have every indication that they will — and start off a really rich friendship and partnership between the two companies.

There definitely will be at least two games and multiple platforms.