Those capabilities aren’t going away, but for the first time in years, the prices you pay for online ads is going up. The core reason?

Google’s enhanced ad campaigns are certainly enhancing one thing: Google’s revenue. After seven straight quarters of decreasing prices for clicks, Google ad prices rose 6 percent over the last three months — and they’re expected to jump another 5-10 percent in the next quarter. 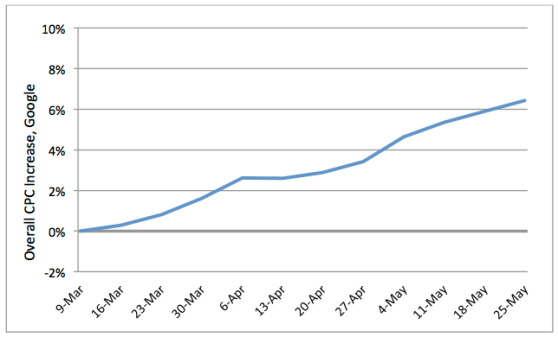 Google announced enhanced campaigns very quietly in February of this year. The enhancement that Google added was simple: baking mobile ads right in with desktop ads. It was a significant change that Larry Kim of search marketing firm WordStream called “the biggest change to AdWords in five years.” It’s a simplification for advertisers, and it’s a recognition on Google’s part that mobile is now core to the web.

“Up to last year you could target desktop, tablet-only, or smartphone-only mobile ad campaigns,” Adobe’s Sid Shah explained. “Now you have one campaign, one bid, and you can give it a mobile adjustment factor to adjust it up or down for mobile.” 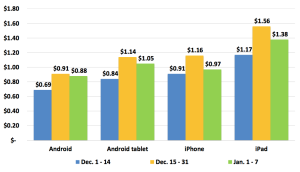 Above: Regardless of the platform, tablet ads cost more than smartphone ads — because they convert better.

Google knows this, of course, so when it launched enhanced campaigns Google added a “mobile bid adjustment” factor that enables advertisers to make their mobile ads 20 cheaper, for instance, than their desktop ads, or vice-versa. But advertisers are not using the MBA wisely.

“What Google recommends is a -20 percent to 0 percent MBA,” Shah, who is the director of business analytics for Adobe’s digital marketing division, told me yesterday. “But we found that MBAs should range all over the spectrum. Which makes sense — if you’re mobile-only, mobile does well for you, and the MBA should be positive, but if you’re doing mortgages, mobile won’t do well for you.”

Which means that although the CPC of mobile ads — particularly smartphone ads — should be a significantly small fraction of your desktop ads, they’re getting artificially boosted by Google’s bundling. This isn’t necessarily because Google is boosting the rate, but because the MBA that advertisers choose based on Google’s recommendation is not representative of the actual cost variations.

And because Google is the gorilla of the online advertising world — with about 50 percent market share of online ads and 56 percent of all global mobile ads — what it does affects the entire industry.

“Over the last three months, for the first time in seven quarters, CPCs went up,” Shah told me. “In the next quarter, CPCs will go up another 5-10 percent, year-over-year.” 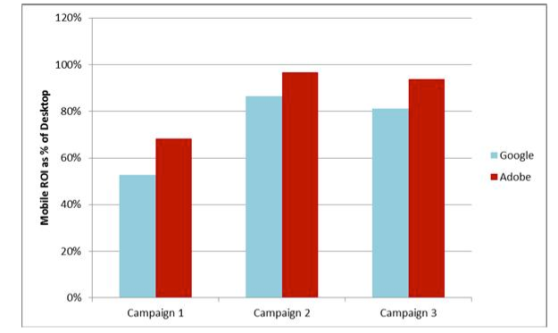 Adobe, which bought digital advertising firm Efficient Frontier in 2012 to build its online, mobile, and social advertising solutions, says that one solution is to work with independent agencies — such as itself — which can help advertisers optimize their spend better than Google, Facebook, or other major ad vendors do directly. The company’s Adobe Media Optimizer technology can help maximize ROI, Shah says, basing its bid and spend parameters on actual conversion and engagement data for your specific campaign.

[Editor’s note: We’ll be discussing mobile monetization at our MobileBeat event in SF next month, where we’re bringing together many of the top players including Google, Millennial, Facebook, Flurry, MoPub, Tapjoy and more.]

“You said that, not me,” Shah laughed.

Last year costs per click fell for the second year in a row, but the overall digital ad spend went up. It’s reasonable to assume, Adobe says, that the spend trend will continue, even while the costs trend has reversed.

Which means more money in Google’s fairly fat wallet, and perhaps a little less in yours.

Unless you get smarter with your spend.