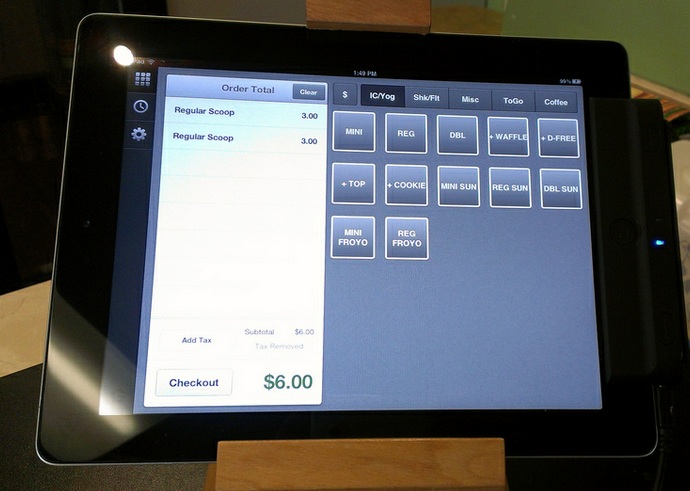 But I think Groupon’s new payments system could present a real threat to Square. And if I’m right, Square should be worried. Very worried.

I had the opportunity to try Groupon payments at a Bay Area ice cream shop on Friday. Although the early test system wasn’t nearly as polished as what Square offers, it worked well enough. And for a typical business, it promises to be a lot cheaper. Square is charging 2.75% of the transaction; Groupon is charging 1.8% + 15 cents for most transactions and 2.7% + 15 cents for American Express transactions. The ice-cream shop owner I spoke with said that Groupon is currently providing the system without any service charges while it is in test mode.

Groupon exposes a longstanding flaw in Square’s business model: It gets too expensive when a business reaches scale or for businesses with high-dollar value transactions.

Although others, like Verifone’s Sail payments system, have tried to compete on price, they haven’t been transparently cheaper. Sail allows businesses to buy down their rate, to 1.95% by paying $9.95 month. Groupon offers a substantially lower rate without any such commitment. Groupon’s pricing is the first I’ve seen that, if I were wearing a Square management hat, merits a response.

For some merchants, Square will continue to make sense. Given the ice-cream place’s low average transaction value, I told the owner that after his trial with Groupon ends, he will save money with Square. But $6 transactions like mine are likely money-losers for Square.

Groupon also has two assets that are critical to the space: a large salesforce and a large customer-service team.

Payments has traditionally been a push business. Hundreds of sales organizations actively call on businesses to get them to accept credit cards. Square has tried to turn it into a pull business, with businesses seeking out Square, either directly or through retail channels such as the Apple Store or the UPS Store.

Groupon has always been about the push model; the only reason it became a multibillion-dollar company is that its salesforce aggressively went after merchants and convinced them to do deals (deals that, in many cases, were bad for the merchant). The ice-cream shop, for example, was approached by Groupon; it didn’t seek the company out.

In this case, Groupon has a product that is substantially cheaper. If I were at Groupon, I would aggressively target Square merchants who are likely to have higher average tickets and are likely to save with Groupon’s pricing. The sell is simple: You’ll save money with Groupon, and I’ll show you. You don’t have to commit a penny. In fact, feel free to keep using Square for your low-value transactions.

Distribution is also an important point. With Groupon, I can get someone to come set up the payment system for me. With Square, I’m on my own.

The other thing =Groupon has going for it is a large customer-service team and substantial experience with customer service. Service is important when money is on the line. Although I’ve had my run-ins with Groupon customer service and a source formerly with Groupon’s customer service team says that customer-service is deteriorating as the company focuses more on the bottom line, Groupon has been doing customer support at much larger scale than Square. My one encounter with Square’s customer service felt like I was talking to a brick wall: My account was suspended because Square suspected I was committing fraud. The good news is that Square’s fraud detection algorithms worked — it’s what I was testing; the bad news is that I couldn’t get anyone at Square customer service to listen to me. (Square PR offered to reinstate my account.)

What Square has going for it is that has a very polished experience. I frequently talk about Square in the same breath as companies like Virgin America, American Express, Apple, and Sonos that are known for great experiences. It also has innovative features such as Pay With Square, which allow consumers to make payments without pulling out a credit card.

But that only takes you so far. You reach a tradeoff of what people are willing to pay for that great experience. Square is combining the pricing of the great experience with the price of the transaction; those are often separate things. The equivalent would be if carriers charged 40% more for data plans on iPhones than they do for data plans on Android. I’m happy to pay an extra $200 to get a better experience by buying an iPhone; but I wouldn’t pay a lot more on an ongoing basis to use an iPhone.

Many merchants just care about payments. The ice-cream shop I visited didn’t even bother to offer me an e-mailed receipt, even though Groupon’s system supports it. Payments was Square’s hook to get people in the door to enthrall them with all of its other services. Groupon’s pricing strategy can close that door.

There’s another company that had a great experience at a premium price: TiVo. The core DVR features are infinitely better than those that come with Comcast’s crappy DVR. It has built-in integration with Hulu Plus, Netflix, and Pandora. But distribution and pricing won, and TiVo is now a minor player in a space that it essentially created.

This is not to say that Groupon has a winner on its hands. It’s possible, even likely, that Groupon will harm Square while doing nothing meaningful for its own business.

Groupon is building up a feet-on-the-street salesforce to tackle payments. (Its North American sales have largely been on the phone.) That’s an expensive proposition. And at these prices, Groupon will have to do an incredible amount of volume to make money.

Groupon’s move into payments, while sensible, reflects a company that is flailing for a business model. But that flailing may end up poking Square in the eye.