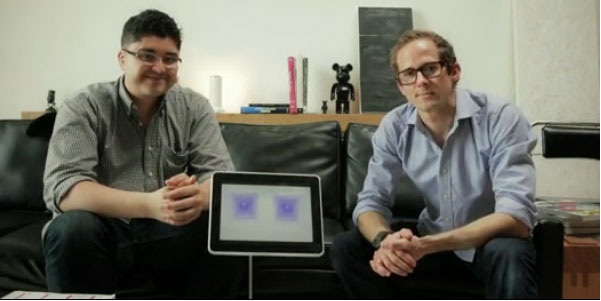 The story of Hanfree, Seth Quest, and Neil Singh was first reported by Eric Markowitz in Inc. magazine. This is reportedly the first time a Kickstarter backer had sued a project creator, and it eventually led to a secondary story about how rowdfunding is serious business.

Quick summary: Seth Quest launched a Kickstarter campaign in March 2011 for Hanfree, a standing iPad mount he’d devised. The crowdfunding campaign was a success, and he raised $35,000. Production was a disaster, though, and Quest ended up unable to fulfill his backers’ pre-orders. Neil Singh was one of those backers, and he filed a lawsuit against Quest.

The lawsuit forced [Quest] into bankruptcy. From there, things only got worse.

Later that year, Quest moved to Brooklyn, but because of the damage to his reputation, he could only find part-time work in what he calls a non-design-related field. To deal with his anxiety and hypertension, he picked up yoga and joined a boxing gym. These days, he’s doing better, but it’s a part of his life he hopes to move on from.

Was Singh a jerk for putting Quest through this ordeal over $70? I posed the question in a blog post I wrote; to my surprise, Singh left a comment in an attempt to set the record straight.

Realizing there was more to this story, I decided to follow up with Singh to hear more about his experience, why he filed the lawsuit, and what he knew about Quest. Hopefully current and future crowdfunders can learn something from this experience.

Crowdfund Insider: What did you know about Kickstarter before you contributed to Mr. Quest’s campaign? What was your experience with the platform, if any?

Neil Singh: The facts leading up to my purchasing that product are pretty much the way they are laid out in that article by Inc. I really didn’t know anything about Kickstarter. I went on the website and I don’t know how I found it. … I have no memory, but you know, I was reading through different projects and how the web site worked so I did have an understanding of how it worked. …

There’s a clarity with which Seth Quest and the entire Hanfree project described what you’re going to be getting if you turn in $50. At the time it was $50, so I understood that it was his idea and it wasn’t the same thing as going to Walmart, but the terms were pretty clear. “You send us $50, and we’ll send you a Hanfree product. You send us $100, we will send you two products.” That’s what I read, that’s what I understood and that’s what I did.

Crowdfund Insider: In your opinion, knowing what you know now about Kickstarter and how it works, is that text misleading? A lot of times under the rewards themselves, these campaigns are very direct and to the point, e.g., “You will receive this.” That is not necessarily the case.

Singh: It’s an interesting issue, and I think it does come down to exactly what is in the text. … I could go into the legal analysis, but it’s really a fundamental thing of telling people what your intentions are. So if your intentions are that … “Look, I’m an entrepreneur, this is a risky venture for me, I’m seeing whats going to happen, and I want to reward you for believing in me in some way by sending you the final product if I am successful, but here’s what’s going to happen if I’m not successful, or I’m going to do my best and I can’t make any promises.” Something like that would be fuzzy in terms of what you’re actually getting, but it would be honest.

I think where you get into trouble is where you just tell people, “Send the $50, and this is what you’re getting.” In Seth Quest’s case, I think what made it worse for him among many other things was the fact that he initially started with $50 and then he posted an update and said “Oh, um, shipping charges — I need to add shipping charges. So another $20 if you’re in the United States, if you’re in Canada another $30,” and I think in Europe it was even higher.

The shipping surcharge … it turns out because I got the documentation from the project after the fact, it was really for nothing. They were nowhere close to having a product finished so they kind of just made up a shipping surcharge to generate more money.

So to answer your original question, the point is if you’re on Kickstarter and you’re offering something you need to be honest about exactly what it is you’re doing; and if there’s a risk of the backers not getting something that you don’t want to be bound to, then that should be stated in the website.

Singh: For obvious reasons I would look at it from a legal standpoint. From a business standpoint, maybe there’s different considerations here, but where I would go to look at what Kickstarter has to say about this is the Terms of Service, and that’s the first place I went when I realized that this thing was going sour. Kickstarter makes it very clear that this is not [its] problem. “We’ve collected our commission, and these are the terms that govern our relationship with you, the backer.” If there’s any fight between the backer and the creator, that is basically not [Kickstarter’s] problem.

That was their original stance. Since then, they’ve kind of updated their position to say, “We encourage creators to be responsible, and they might be held legally liable if something goes wrong,” but really, they haven’t changed anything. This issue remains that this is not [Kickstarter’s] problem.

Here’s one other way of looking at it, too, that I thought of a long time ago. … Somebody like Seth Quest who’s inexperienced, he didn’t really know what he was doing, he didn’t have any business background or anything like that. … Kickstarter kind of encouraged somebody in his circumstances to think that you can just be the CEO of a venture project just by putting together a few designs and creating a video and slapping it up on Kickstarter. If it looks good, hey, I’m a CEO, and suddenly I’m the head of this project. That was a little unrealistic, so I think Kickstarter could have avoided the situation for somebody like him or probably for other projects as well.

Crowdfund Insider: You spoke earlier about Mr. Quest coming back asking for shipping charges after he had already solicited and secured contributions. What other mistakes did he make along the way that were easily avoidable or maybe made you feel uncomfortable about his savvy as an entrepreneur?

Singh: I think from beginning to end, it was something that he did not think through. He just didn’t think it through. He didn’t plan anything, he didn’t plan what he was going to do with the money, where he should keep the money, how he was going to handle the budget, whether he needed a business plan. … None of the very elementary, fundamental steps were followed by him from A to Z.

I would say the worst thing that he actually did, the most disturbing thing that he actually did, was he took that $35,000. … He just deposited it into his personal bank account, and the thing that bothered me the most but not enough to pursue him beyond what I did, is that there’s no accounting for what he did with that money. My speculation is that if you put it into your personal banking account you’re intermingling it with your personal expenses and you start using that money for personal expenses, and that can get you in a heap load of legal trouble. That was probably the biggest mistake that he made right there, but again, if he had just gone back and talked to somebody with business savvy they would have told him you need to set up a corporation, the corporation needs to have a bank account, you should probably have an accounting person and all that stuff.

Crowdfund Insider: Other media outlets have reported that the lawsuit has proven pivotal in bankrupting Mr. Quest. Your comment disputes that. Would you care to expand on that and what your knowledge is of Mr. Quest’s situation?

Singh: As far as the bankruptcy is concerned, my lawsuit was actually little more than a small claims lawsuit. If you file a real lawsuit in Arizona you file that in superior court. I filed it in a court that is lower than that called the justice court, and it’s not actually small claims court. For legal reasons, I didn’t file it in small claims. It has to do with the fact that I wanted a declaration that we were not investors, we were buyers. You can’t do that in small claims court, so I filed it in justice court.

All I was asking for (and the other backer who joined me) was our refunds. All we were asking for was our $70 refunds. So, my claim for $70 is not what bankrupted Seth Quest.

What bankrupted him was $35,000 that he owed to 400-plus people, and I learned through the bankruptcy papers that we all got after he declared that he was also being sued by at least one of his other credit card companies. He was facing multiple liabilities and I guess he had no way of paying it back and that’s why he decided to declare bankruptcy.

Crowdfund Insider: Knowing what you know now, would you ever contribute to a crowdfunding campaign again? Has this made the whole industry sour?

Singh: I think that something like $35,000 just kind of disappearing is probably just one of the growing pains that this entire concept has to go through before people start to figure out what the boundaries are, what the rules and standards should be.

So, my answer to your question would be that I am not opposed to crowdfunding in general. I would probably be happy to contribute to some project that was interesting to me provided that I was pretty confident in exactly how it was being run and what was being promised and I knew what the probability was of actually obtaining the reward, whatever that would be.

Ten years from now, a Seth Quest-type situation probably could not occur even if someone wanted it to I assume, because the rules will be much clearer and people will be much more savvy about what’s a good project versus a bad project.