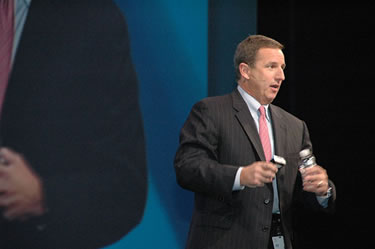 Mark Hurd ran the the world’s largest technology company, Hewlett-Packard, but he blew it.

Bill Hewlett and David Packard started HP in 1939, and they became Silicon Valley icons because of the significant company they built, their belief in hiring great people and the vision they articulated of a future driven by technology.

They came up with a management style dubbed “The HP Way,” which spelled out how to run a profitable company and live up to words such as “trust,” “respect for individuals,” and “uncompromising integrity.” They’re rolling over in their graves now: Hurd resigned today after admitting to a failure to live up to HP’s standards. His downfall followed a board investigation into sexual harassment allegations.

Hurd managed to wow everyone in his five years at HP by reviving the company that had struggled under his predecessor, Carly Fiorina. Hurd focused on execution, strengthened HP’s profits, and made a series of acquisitions, including the $13 billion purchase of EDS. When the dust cleared, HP had become bigger than IBM. That has to go down as one of the most monumental management achievements in tech history. Hurd was pretty much in his home stretch. He could have retired and run for public office.

But HP seems to be accursed, always sinking into some kind of soap opera. It’s tragic and stupid that Hurd is being brought down by what some would consider to be a “non-material event” of his own making.  The board, already sharpened by its failures and scandals of the past, stepped up and investigated, and what did they find? Padding of an expense report when he’s got millions to his name. “What was he thinking?,” we ask. And then we remember greek mythology, and the tragedy of human weakness.

The founders of HP had their own personal flaws as well. But they weren’t brought down by them, and their actions never put the company at risk. Now, without its turnaround CEO, HP is rudderless. Hurd’s shoes can’t be filled easily. The CEO who replaces him will have a steep learning curve to understand the complex and sprawling company that is HP. It is a critical time for the company. The company just bought Palm for $1 billion, and is readying to do battle with Apple in the high-stakes but extremely competitive mobile phone business. How will HP, as the world’s biggest PC maker, make the transition into mobile devices such as smartphones and tablets, at a time when these devices are the strongest ares of economic growth?

Doubly hard to understand is how this happened to Hurd when he, more than almost any major executive, appeared so disciplined and true to message. He eschewed the flamboyance and attention-getting antics of his predecessor. He demonstrated a sharp intellect when it came to balancing the risks and opportunities of running the huge corporation. What’s more, he presided over HP back in 2007, and witnessed first hand events that showed just how easily personal conduct can sink you: Patricia Dunn, the former chairman of HP, was forced to resign after launching a botched spying operation against  journalists and HP board members in an attempt to plug leaks. Hurd watched Dunn go down in flames. And yet he wasn’t careful to rein in his own behavior. There’s an arrogance to power.

Maybe it’s one of those Alpha Male flaws. The leader of the pack proves his mettle, and then seeks his rewards.We’ve seen this over and over again, mostly with politicians, but occasionally with corporate leaders. The best explanation I have heard so far is that Hurd is only human.

One thing is for sure: HP should try to put a stop to this curse once and for all. It should find a leader who can live up to the company’s goals of running an outstanding business and behaving with integrity — so that it resume great tradition that had set the company on its way, and had become an inspiration to all.