By connecting ordinary devices to the internet, the tech world is creating the “internet of everything.” And the Wi-Fi Alliance, a collection of companies that make wireless networking devices, believes that Wi-Fi will be the way to make it all happen. 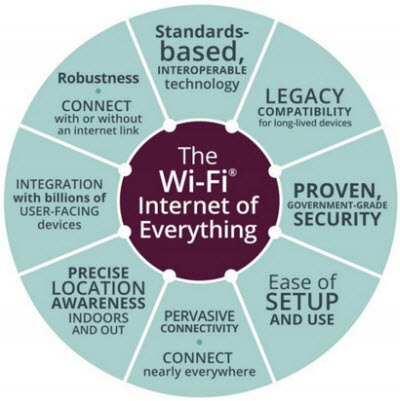 Above: WiFi will connect the internet of everything, says the WiFi alliance.

Wi-Fi will connect the internet of everything, says the Wi-Fi Alliance. The alliance said that it conducted show that 93 percent of smartphone and tablet users think the “internet of things” (which the alliance wants to rename the internet of everything) will positively impact their lives. 72 percent think it will make their lives better. That pretty much means that consumers are poised to embrace big changes in the way they use technology.

One out of four males want to have on-demand video and gaming in the next car they buy. To make this happen, we’ll need a sea change in connectivity, according to Wi-Fi Alliance president and chief executive Edgar Figueroa.

“The internet of everything is not just a discussion for insiders,” said Greg Ennis, technical director of the alliance, in an interview with VentureBeat. “Consumers are well aware that it is coming and they see it as a positive thing.”

While Wi-Fi consumes a lot of power, Ennis believes it can evolve to the point where it will be easy to install in connected devices without draining the device’s battery life.

“That was an issue when it was first put into smartphones, but it has been successful as the technology has moved forward,” he said. “Wi-Fi has demonstrated that it is flexible and expandable.”

The survey found that 77 percent of smartphone and tablet users think Wi-Fi connectivity will be an important purchase consideration for at least one item in their home when they next have to replace it. 90 percent of consumers are more likely to buy products for their household if they can sync everything to their existing WiFi network.

They also expressed concern about products that aren’t compatible with their current Wi-Fi networks.

“These devices will be used for five to 15 years, so it’s important they be compatible,” Ennis said.

They also want connected products to be easy to use. About 84 percent listed these issues as concerns about smart technologies in their homes. Ennis said that users are also concerned about privacy, as they don’t want their smart devices to be used to spy on their habits.

“You don’t want your neighbors to control your devices or find things out about you by monitoring your devices,” Ennis said.

Among the applications people want are smart appliances, home security, smart energy, and in-car entertainment. They want smart lighting, thermostats, irrigation devices, personal health devices and appliances. 63 percent of respondents said that within ten years, the majority of devices they buy will have smart technology.

Wakefield Research conducted the survey for the alliance by interviewing 1,000 smartphone and tablet users via online means between Nov. 25 and Dec. 4. The Wi-Fi industry has sold more than one device for every person on Earth. 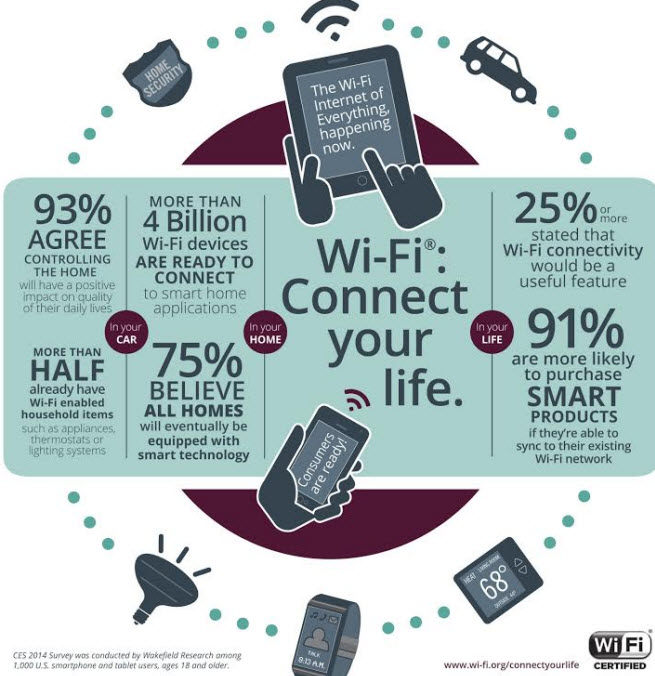