Wikia, a site that its founders liken to a Web version of a library — offering user-generated “books” of content about specific issues — is seeing explosive growth after some recent software changes.

Jimmy Wales, founder of the popular site Wikipedia, and later cofounder of Wikia, a for-profit version of Wikipedia that goes into more detail about specific topics than Wikipedia does, said the site now ranks as the No. 78th most popular site in the U.S., according to site measurement company Quantcast, up from No. 100 just two months ago. 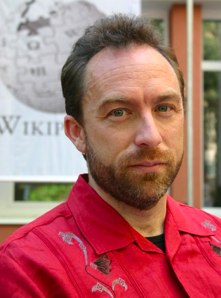 He said the growth is in part being driven by some changes Wikia has made to the site in order to make it easier for users to edit. For example, the site has moved to a WYSIWYG (What You See Is What You Get) interface, where content displayed during editing appears similar to the final output.

In just the last two months, the number of global visitors to Wikia (see VentureBeat’s profile of Wikia) has climbed to 24 million a month, up from 18 million a month. The site is seeing eight percent growth per month in both visitors and page views, according to Quantcast. Wales shared the stats while speaking at the Symbian SEE conference here in London, where the open source mobile platform company Symbian hopes to draw lessons from Wikia on how to generate community among its developers and in turn inspire end-users.

I was invited to moderate a Q&A with Wales after his speech and asked him about how he was monetizing the site. The Wiki site is running one ad on each page, and these ads are drawing revenue that on a cost-per-thousand click basis is comparable to revenue generated on other sites, he said. However, he said that readers are more deeply engaged with Wikia pages than they are with say, Facebook pages, and so the ads will draw more revenue than they would on most other social sites.

He also announced today that Wikia has just logged its first profitable quarter. Wikia had announced earlier this year that it had logged its first profitable month. He said the site was now clearly “sustainable.” His main concern, he said, is to try to expand its usage globally, and questions linger about whether the site has the power to break further into mainstream users. His worst fear, he said, is about whether the site might stall at a top-60 or so site, instead of move to a top-20 site.

Wales showed slides illustrating how Wikia has just passed the total traffic of the New York Times, according to Alexa. In another example, he compared the ranking of Wikia’s recipe site, http://recipes.wikia.com/wiki/Recipes_Wiki, with Gourmet Magazine, which just went out of business. Wikia’s recipe site is the 8,000th most popular site on the Web, compared with Gourmet’s rank of 17,000. He said Wikia’s recipe site is offering “deeper, richer and more complex” content, and that is resonating with users. He used other examples, such as a Cannon camera hacker site, which he said brings together a niche, but enthusiastic, group of followers who otherwise would never have found each other. 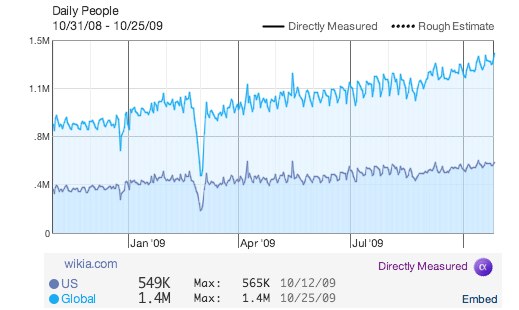