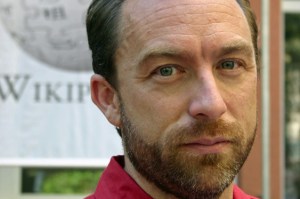 [Update: Jimmy Wales tweeted me to say the change to his editorial status is “A purely technical matter. I am not stepping down or pulling back from anything.”

For my sourcing beyond Fox, see this discussion page at Wikimedia, which documents changes to Wales’ account privileges:

That same page links to a heated discussion about sexual content and Wales’ ability to delete it.

Fox News reports that Jimmy Wales, cofounder of do-it-yourself encyclopedia Wikipedia and a member of its board, has given up his administrative privileges on the site in response to a Wikipedia community backlash against his removal of thousands of images deemed pornographic by Fox last month.

Wales remains a board member of the nonprofit Wikimedia Foundation that runs the site. But he is, according to Fox, “no longer able to delete files, remove administrators, assign projects or edit any content” on Wikipedia itself.

In April, Fox reported that Wikipedia cofounder Larry Sanger, who left the project in 2002, had sent a letter to the FBI specifying his concerns that at least two categories of  the Wikimedia Commons archive — one for pedophilia and another for Japanese lolicon comics — contained dozens of images of child sexual abuse, in violation of Federal law. Wikimedia Commons is used to host images and videos displayed on Wikipedia.

There’s currently no way to selectively filter the Wikimedia Commons content, Sanger told me in an email. To paraphrase Sanger, a school library whose Internet access filters allow children to use Wikipedia would also have to allow them access to images meant for only adults to see.

The scandal could resonate throughout Silicon Valley’s power structure, to which Wales has extensive ties. Google has donated to the Wikimedia Foundation foundation. Wales’s separate, for-profit wiki startup Wikia raised money from Bessemer Venture Partners and eBay founder Pierre Omidyar’s Omidyar Network. He’s a member of the board of directors of community recommendations site Hunch. Hunch is backed by Khosla Ventures, whose founding partner, Vinod Khosla, has donated to the foundation along with his wife, Neeru Khosla, who serves as an advisor on educational issues to the Wikimedia Foundation.

“I think a lot of teachers and education technologists responsible for the filters at public schools don’t realize how much and what level of pornography there is in the system. I’m quite sure that if they knew there were pages devoted to pedophilia, it might make them think twice about giving students unrestricted access in schools.”

Fox News claimed that Wikimedia officials did not respond to reporters’ requests for comment. That may have been a bad move. The brazenly conservative news agency went after the Wikimedia Foundation’s corporate sponsors, sending links to the controversial content to Microsoft, Google, Best Buy, the Ford Foundation, Yahoo, USA Networks and dozens of other companies and organizations.

Last week, a purge of thousands of Wikpedia images still left Fox with plenty of pictures to wave around.

Now, Fox claims, it turns out that Wales had unilaterally begun deleting images and recruiting other editors to assist him, against the wishes of other editors who felt the content was acceptable. Wales, whose personal page on Wikipedia speaks of “Doing The Right Thing,” allegedly began the purge himself despite opposition from many editors.

“We were about to be smeared in all media as hosting hardcore pornography and doing nothing about it,” he wrote on one of the Wikimedia Foundation’s mailing lists. “Now, the correct storyline is that we are cleaning up. I’m proud to have made sure that storyline broke the way it did, and I’m sorry I had to step on some toes to make it happen.”

But a result of other editors’ complaints, Wales has since relinquished some special rights he had to edit the site, clearly documented in a discussion page on Wikimedia.

Fox’s reporting is factually spotty — they assert that Wales is president of Wikimedia, when Wikimedia’s website identifies him as a mere board member — but the gist of the story hasn’t been refuted. (Let me spell this out: From long experience, we know that if we don’t acknowledge Fox has an agenda and made a few mistakes, other people will use those to discredit Fox’s entire story, which is both factual and newsworthy.)

Wales has a history of using his status at Wikipedia to resolve content disputes on the site, especially pages about people. In 2006, he stepped in to arbitrate the contents of a page about Fox News commentator Rachel Marsden.

Now, if he can’t make authoritative changes to settle controversies without convincing someone else to do the typing, it’s unclear if Wales still wields any real power over his creation.