Wikiwand, the startup funded to the tune of $600,000 to build a beautiful alternative to the main Wikipedia app, has launched its first native mobile client, kicking off on iPhone.

Launching in August last year, Wikiwand has hitherto offered a web app and browser extension for Chrome, Firefox, and Safari, which transform the main web-based Wikipedia interface into something more alluring. This includes immersive cover photos for articles, a fixed contents table that’s always visible when scrolling, link preview boxes, and more. It’s perhaps what a Wikipedia of 2015 should look like.

Above: Wikiwand in Action

As one of the web’s preeminent brands, Wikipedia needs little introduction, but with an open API in tow, it also provides many startups and developers with data to use in their own spin-off services. These include alternative mobile Wikipedia clients such as Wikiweb, Wikipanion, and now Wikiwand.

Wikiwand is optimized for iPhone, though it will still work on iPad as a “blown-up” version. While it does borrow some key features from the main Wikipedia iOS app, it brings a fresh “visual” approach to the digital encyclopedia. As you can see with the Wikiwand (left) iPhone screenshot below, Wikiwand has basically taken the design ethos of its web app and replicated it in a native mobile app. 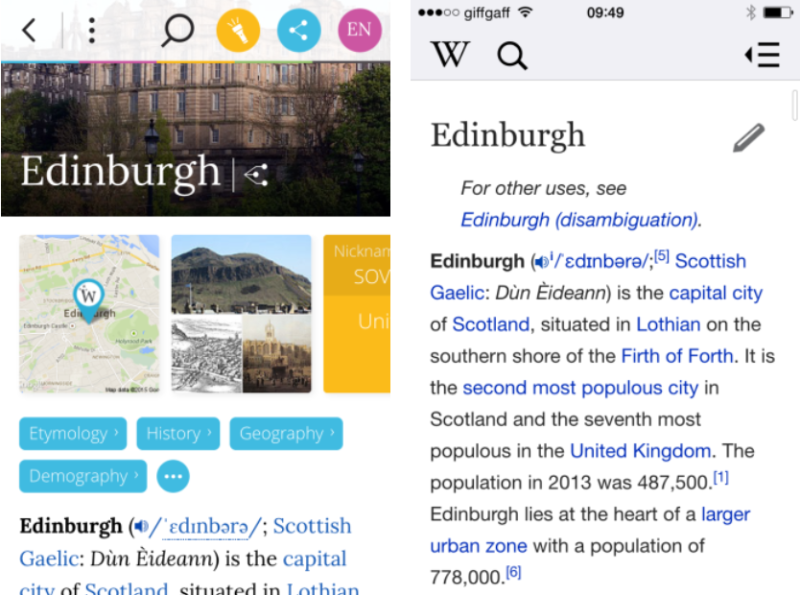 Above: Wikiwand (left) vs. Wikipedia

Wikiwand’s incarnation makes it easier to access certain features, including in-article search and article sharing. The company has also managed to include the link-preview option in the app, which would seem to be hard to do on mobile, but all you do is tap the desired link and a box pops up from the bottom. Also, those blessed with fluency in more than one language can easily switch languages by tapping a little button at the top of each page 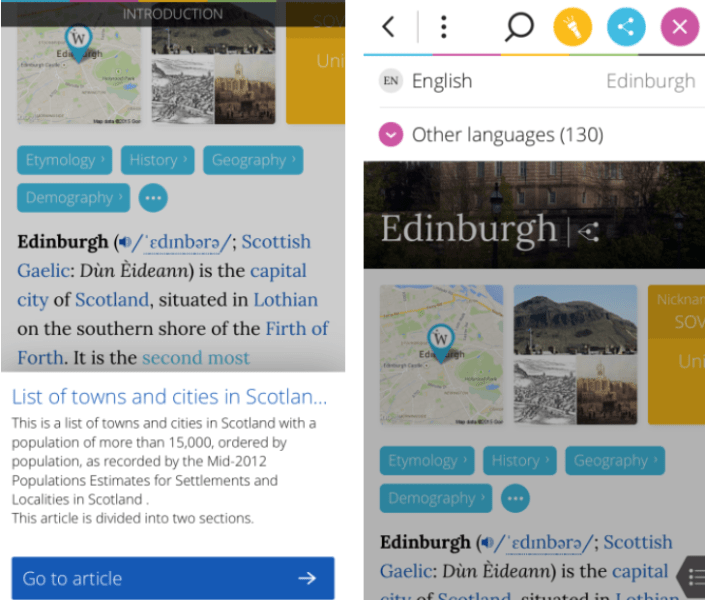 The more you dig through the app, the more neat little features you find, including “Nearby,” which is similar to Wikipedia’s own location-based offering, except this plots articles on a map rather than in a list. But it’s worth noting here that this app is aimed at readers only — you’re not able to edit Wikipedia articles within Wikiwand. For that, you’ll need to use the official Wikipedia client.

While there are many unofficial Wikipedia apps in the App Store, Wikiwand stands on its own and is particularly notable for a number of reasons beyond aesthetics.

First, Wikiwand has received angel funding from Saar Wilf, who sold his transaction verification company Fraud Sciences to PayPal in 2008 for $169 million. While there’s nothing to suggest that the Wikimedia Foundation would do anything to cut off access to the open Wikipedia API, it’s clear that Wikiwand will have to start monetizing at some point — and monetizing content that has been donated by the public for the greater good seems to go against the philosophy of the Wikipedia brand.

At any rate, Wikiwand has managed to bring a genuinely great Wikipedia browsing experience to the iPhone, one that will be arriving for Android soon too.