Last year 40,000 people died in traffic crashes in the United States. That devastating figure hasn’t been distributed equally across all sectors of the population. Low-income areas were disproportionately affected by the traffic cash epidemic. How much so? Two times worse!  According to research conducted by Governing Magazine in 2014, high-income areas had 5 traffic crash fatalities per 100,000 people, while the proportion for low-income areas was 10.4. 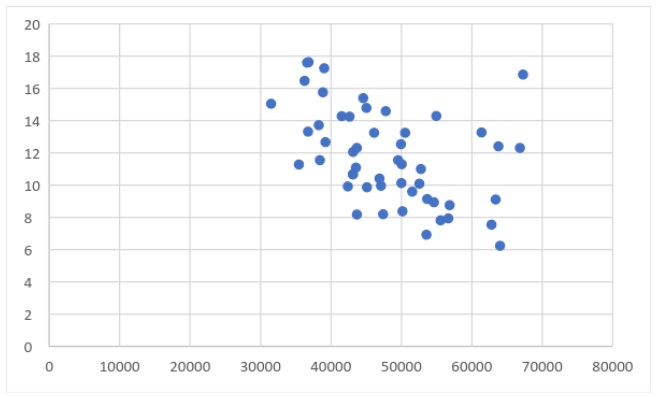 Above: Correlation between a state’s GDP per capita and traffic fatalities per 100K people

What drives this inequality of traffic crash fatalities? Correlation is, of course, easier to demonstrate than causation, but there are some possible explanations. Some point to the fact that people with low incomes tend to drive less and walk more, therefore being more vulnerable as pedestrians. A 2009 report found that 45 percent of traffic fatalities that occur in low-income countries are among pedestrians, compared to only 18 percent in high-income countries. Another explanation concerns the quality of the vehicles driven in low-income areas. These tend to be older and not equipped with modern life-saving safety technology such as rear cameras and lane-keeping systems.

So, as autonomous vehicles take the place of manually-driven cars, should we expect traffic safety inequality to change as well? Currently, the cost to own and operate a car is 57 cents per mile (according to AAA). Will autonomous vehicles be more affordable? Some people think so (Barclays and Deloitte), while others disagree (Ford). As AVs gain greater market penetration it is likely that the price of what is now considered “a safe modern car” will decrease significantly. That by itself might help to lower traffic fatalities in low-income areas (assuming manual driving isn’t banned altogether), but it won’t solve inequality as long as AVs are safer and costlier.

Having said that, AVs might help create equitable roads in an indirect way. Just as trees create the valuable resource of oxygen as a by-product of their very existence, AVs will create resources for everyone, not just their owners. Each autonomous vehicle that operates on the road creates, as a by-product, immense amounts of information that is incredibly useful for traffic safety analysis. For example, AVs are expected to generate about 4TB of data per day; compare that to the 20GB per year that current city road sensors generate. Therefore, AVs might help cities to better identify the unique traffic characteristics of low income areas.

Cities should keep that in mind when they choose the first couple of roads to allocate to autonomous driving pilots. The precious safety data will only be generated in areas where AVs are allowed to drive. To be sure, lowering traffic fatalities in an equitable way can’t be done with a “one size fits all” policy. Municipalities will need to drill deeper into the typical patterns of traffic crashes in their communities and take appropriate preventative measures in each one.

Sefi Keller is a consultant for WayCare technologies. Previously he led the research team at the Kohelet Policy Forum, researching the expected impact of ridesharing and autonomous vehicles on society.