“What’s cooler: music or computer programming?” I asked Will.i.am, one of the founding members of the iconic hip hop band Black Eyed Peas and the “director of creative innovation” at chip giant Intel.

“Coding,” he replied instantly. “By about 10 times. A trillion times. It’s the most creative space.”

Will.i.am has been fascinated by technology for years. He’s made a few strategic early investments, most notably in Twitter. But he does not intend to set up a venture firm, like fellow celeb Ashton Kutcher.

Will.i.am tells me he’s more of an operator than an investor. So he’s learning to code and is traveling the world encouraging kids to follow in his footsteps by learning technical skills. It may come as a surprise to fans that he’s a frequent fixture at MIT, where he checks out the latest wearable computing and robots at the Artificial Intelligence Lab.

His entourage just got a new addition: Lilly Kam, a MIT grad who’s the director of STEM [science, technology engineering and math] at the i.am.angel foundation.

Kam is helping Will.i.am learn to code and is developing programs to support science and math education in schools. The musician told me he also has a traveling tutor from Intel, who helps him build his own apps.

I interviewed the musician, philanthropist, producer, and programming student at the Intel Capital CEO Summit in San Diego. He had just delivered a keynote onstage, where he spoke to a packed crowd of executives about ways to get kids from the projects interested in technology. 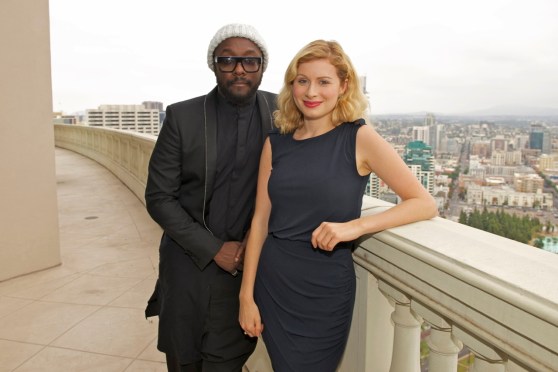 VentureBeat: You’re a keen supporter of the nonprofit Code.org. What inspired you to start learning to code?

Will.i.am: It’s 10 times better than music. 1 trillion times. I’m making music based on frequencies. With code, I can create operating systems of my own or apps that allow me to make music.

VentureBeat: How are you learning to program? Are you taking a course?

Will.i.am: One of the deans at MIT suggested that I take a course online. I also have a traveling tutor from Intel. Lilly is an MIT grad who works at my Foundation, i.am.angel, on STEM education. I get to learn right alongside the kids.

VentureBeat: Has it been a struggle for you to convince kids to care about technology?

Will.i.am: Yes. No one has told them why it’s cool. Pop culture isn’t set up that way. Tech companies make an amazing device — but next year, it’s not amazing anymore. Kids see tech as disposable. If you take basketball as an example — last year’s basketball is just the same as this year’s. It’s not disposable. We’re not marketing tech very well to kids.

We need to inform young people that tech is the coolest thing in the world. They have to realize that technology is powerful, cool, and sexy.

VentureBeat: It sounds like tech companies aren’t doing a great job of marketing and branding themselves!

Will.i.am: Yes. Let’s take Red Bull as an example. That energy drink was first used by truck drivers. They marketed it by showing race car drivers and a football team drinking it. They made it seem hip, social, and adventurous. But tech companies are making such antisocial devices.

VentureBeat: Tech has a lot to learn from the entertainment and consumer branding industries.

Will.i.am: Yes. Do you think of Apple as a tech company? They just hired the CEO of Burberry — smart move. Angela [Ahrendts, the former CEO of Burberry] spoke at my conference two years ago, TRANS4M.

VentureBeat: Do you invest? If so, what kind of startups are you looking for?

Will.i.am: Investing is this new Hollywood thing. I invested in Twitter and Tesla kind of early. I didn’t put in a small amount. [Silicon Valley billionaire] Ron Conway sits on the board of my i.am.angel foundation.

I want to do incubation. I want to curate collaborations. I’ll code and bring in a designer, and we’ll create something that doesn’t exist. I want to bring new intellectual property to society, and new consumer electronics platforms. Investing is cool, but I’m more of an operator.