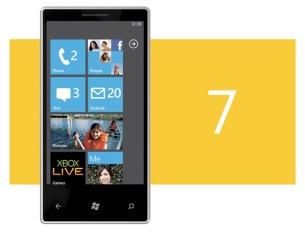 Many pundits have written Microsoft off in the mobile platform wars, but based on what I heard during a Windows Phone 7 session at VentureBeat’s MobileBeat 2010 conference in San Francisco at the beginning of the week, I am here to tell you that Windows Phone looks promising.

First and most importantly, Microsoft has learned lessons from its Windows Mobile strategy. In allowing several device makers to develop devices for Windows Mobile, it made the platform more widespread but also made it fragmented and hard to control (by the way, Android is following a similar strategy with a few differences today). Going forward, Microsoft says, it will work with device makers to design phones around a certain hardware specification. This will make the Windows Phone operating system tightly integrated with the hardware – akin to Apple’s iPhone, although the difference in this case is that the phone will not be manufactured by Microsoft itself.

The user interface looks interesting — Microsoft has done a number of innovations to differentiate itself from the crowd. Most noteworthy are its “Metro” theme (font that looks similar to signs on a train station or an airport) and its concept of tiles. A tile can be an application, a group of applications, or even a favorite contact — with additional information such as notifications and messages. For example, someone who likes to follow where their friends are through Foursquare‘s mobile check-in app could designate a Foursquare tile that would show recent friends’ check-ins without the need to launch the application. The platform also lets developers choose between “panoramic” or “pipe” interfaces. In a panoramic interface, a user can swipe the window to see additional information. For example, in the People application, a swipe to the right could show recent activity with people you’ve marked as your favorites.

Windows Phone’s capability to offer a mobile version of Microsoft’s Office can be one of its most powerful weapons. Despite efforts by several companies to offer Office-like tools, Microsoft Office is still the most dominant productivity suite on the planet, and while web apps such as Google Docs can be a potential replacement, they haven’t caught up yet.

Then there are the games. If you think Android can catch up with iPhone on gaming, wait until you see Xbox Live on the Windows Phone. Based on one of Microsoft’s most successful product launches in recent history, the XBox Live capability would instantly enable Windows Phone users to play games with Xbox Live users across devices, and thus could attract a huge XBox fan base.

To double as a music player, Windows Phone will act as Zune — a product that never caught up with Apple’s iPod, but is nevertheless a welcome addition to the device. It’s worth mentioning that Android devices have no decent solution to organize and sync music, so Zune should give Windows Phone a significant edge over Android in this respect.

To help users discover applications, Windows Phone will offer high-visibility spots to certain apps – although it’s not clear whether app developers will have to pay for the placement or if it will be based on other factors. Microsoft could possibly offer a few sponsored spots – but that could end up hurting the developer ecosystem. The app store will also display a featured app as a wallpaper, which is a unique way of promoting an app and also looked cool in the demo.

So far so good for Windows Phone 7. But there are a number of things that could go wrong.

In contrast to what GogaOM reported, the Windows Phone’s senior product manager told me that the cloud syncing capability — a feature that I was most looking forward to — is only rudimentary when compared to Kin’s Studio, which allows seamless over-the-air syncing of photos, music and video, contacts, and other content. Studio is a powerful concept — and truly could give an edge to Windows Phone. Android, although very good at syncing contacts with Google address book, has little support for syncing media, and iPhone only offers such support with its paid MobileMe subscription. It’s difficult to see why Microsoft would let go of such a powerful feature. Could this be a sign of persisting organizational problems that killed the Kin?

Speaking of organizational problems, they could be the one of biggest hurdles in Windows Phone’s success. The launch has already hit several delays and any further delays could be fatal. Moreover, several device makers, such as Motorola and HTC, have declared strong support for Android, and it’s doubtful they’ll dedicate enough resources for Windows Phone anytime soon. Samsung, which has been relatively slow on Android, seems like the right choice for Microsoft. It is also not clear at this point how different manufacturers will differentiate their devices given that they would all have to follow strict hardware specifications provided by Microsoft.

On to the app front, since Microsoft is so late in the “superphone” and mobile apps game, it will have to launch with compelling preloaded apps, either developed internally or via close partnerships with players like Facebook and Foursquare (which it is already doing). Only then could it attract a substantial base of users, in turn enticing developers to build more apps for the platform. Some developers might even turn to Windows Phone to get early lead as they see little chance of breaking through all the noise in the overcrowded app stores on Android and iPhone platforms. And of course, Microsoft’s intention to pay cash incentives to developers to develop for its platform, could make developers switch — but it’s again not clear how sustainable such strategy could be.

Microsoft has proven time and again that it can come back strong, and if there was ever a time to come back strong in the mobile market, it’s now. The platform has several real strengths, but the company will have to avoid organizational and strategic missteps, hit the target dates (expected to be this holiday season), and fully execute on the vision if it’s going to get itself squarely in the game.