Google Docs & Spreadsheets, the search giant’s suite of online office software, became available to the general public a little more than two years ago. As a belated birthday present, analytics company Compete just released some data to show how Docs has grown.

Compete’s numbers show steady increases: The Google Docs and Spreadsheets sites had a total of 4.4 million unique visitors in September, up 156 percent from a year ago, and up 32 times from two years ago. Compared to traffic to office.microsoft.com, which is at around the same level as two years ago, that’s impressive. Of course, Microsoft’s Office website serves a very different function — you don’t use it for your actual word processing and spreadsheet making. 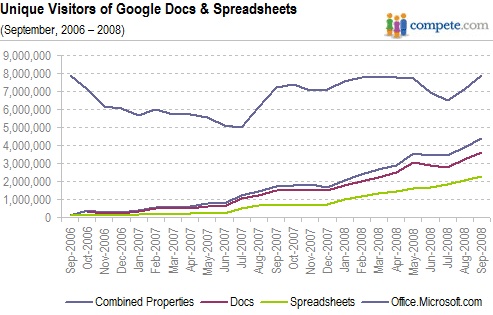 Here’s the problem: It looks like most visitors don’t use Google Docs for all that much work, either. User engagement has plateaued in the last year or so. Last month, the average user visited Google Docs on 3.01 days per month, and Google Spreadsheets for 3.11 days per month, implying that people are just trying them out, or only using them for collaboration, rather than for day-to-day work. (Compete’s data shows similarly limited engagement among visitors to the site of competitor Zoho, according to ReadWriteWeb.)

This probably won’t surprise anyone who has actually used Google Docs or Spreadsheets. Both products are more-or-less okay, but I don’t think anyone would praise either of them as a high-quality word processor or spreadsheet program — and I say that as someone who uses Google Docs every day. For example, I believe that the only way you can add page numbers to your Google Docs is by editing a document’s HTML code, which is ridiculous.

That hasn’t stopped Google’s growth yet, because users are tempted by the free offerings and the collaborative features. But that could change when Microsoft releases the next version of Office, code-named Office 14, which will include online collaboration. Microsoft isn’t releasing pricing details, but it has said there will be a free, advertising-supported version. Basically, that could destroy Google Docs’ two competitive advantages.

Does that mean Google Docs is doomed? There’s definitely going to be a lot of pressure once Office 14 comes out to bring Google’s product up to snuff if it wants to stay competitive. On the other hand, Microsoft has to protect its core revenue (out-of-the-box software), so its hands are somewhat tied. It has said the online version of Office will be a lightweight version that complements the desktop versions of Word, Excel, etc., so Google doesn’t have to replicate Word’s full feature set. Google is also finding web-specific ways to innovate around Docs, such as including Docs as a gadget in Gmail and adding new applications through Labs for Google Apps.