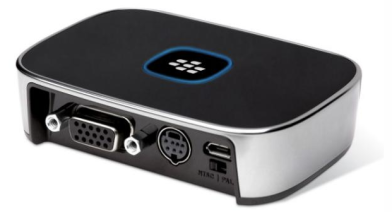 Research in Motion has announced that it is launching a mobile PowerPoint presenter, a device that completely does away with the need to carry around a laptop when you need to give a presentation with slides — consultants rejoice!

Able to store up to 100 presentations, the presenter only requires you to own a compatible Blackberry and have access to a projector. It’s like a Mac Mini dedicated just to the dreaded task of PowerPoint, only even more mini.

Blackberry phones have always been the popular choice for professional use. Users who need to stay up to date with emails and frequently access documents find it preferable because its physical keyboard is better for high-volume typing. It seems like adding PowerPoint capabilities would make the phone even more celebrated among this crowd.

But the iPhone and now Android phones are giving RIM a run for its money in the enterprise smartphone space, and Blackberry’s dominance is shakier than ever. While the other two prominent smartphones have gained more traction for personal use, both platforms are making inroads into the enterprise audience with slick user interfaces and more professional-friendly features.

This could be bad news for RIM, which needs to stay on top of this market, despite strong earnings in the last quarter of 2009. The launch of the Blackberry Presenter is clearly meant to solidify its leadership position, making it even more helpful and versatile for large companies that issue hundreds or even thousands of smartphones for their employees to stay connected.

As useful as it could be, the device costs about $200, and you still need a projector. The iPhone has the upper hand when it comes to an ecosystem of third-party developers and OEMs in this area — evidenced by several third-party devices such as this video projector made by MiLi, a small devices that eliminates the need for not just a laptop, but also for a separate projector. The only thing bogging it down is its hefty $399 price tag.

All in all, while the Blackberry Presenter will be a welcome addition for enterprise users who already use and love Blackberry, it probably won’t be enough to make someone switch from the iPhone. If, however, RIM can turn out a device that is small and affordable enough that also operates without a projector, then it could start chipping away at some real market share.