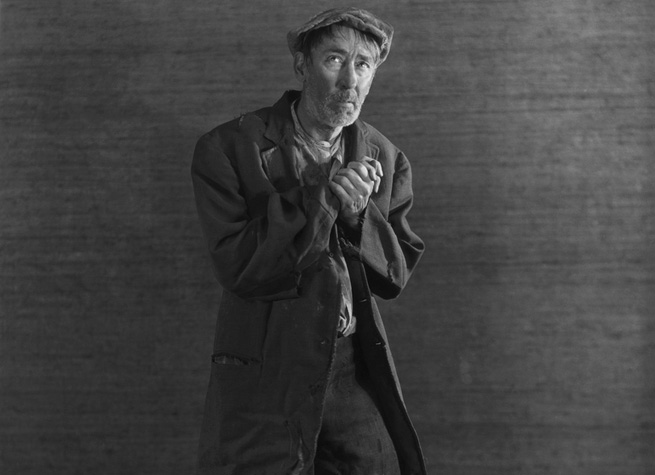 This is a guest post by Carlos Kemeny, a dual-PhD student at Carnegie Mellon University and Católica Lisbon School of Business and Economics.

Your city is probably considered a “thriving startup community.”

Your mayor and news station can confirm this is true. It sounds good. It feels good.

However, what proof do you have that you live in a thriving startup community? You might point to the increasing number of startups or growth in incubator space, but these measures do not necessarily lead to a sustainable future.

In the name of job creation, cities are rushing to commit precious money, time, and resources to building the necessary startup community infrastructure. They present little evidence that these efforts are producing favorable outcomes and can be sustainable over time.

My goal is to convince you that we need standardized entrepreneurship data, in order to properly engineer startup communities. Otherwise, we may see many startup ghost towns in the near future.

The difficulty of pulling VC dollars away from Silicon Valley

The startup movement is an appealing prospect for entrepreneurs, regional investors, and policy makers. However, even with flashy launches and rebranding efforts, regions are still struggling to lure venture capital dollars — a strong predictor of a vibrant, sustainable entrepreneurial community — away from Silicon Valley. Venture capital investment data from PricewaterhouseCoopers’ MoneyTree Report suggest that uninformed efforts to create entrepreneurial communities may be in vain.

Recently, Brad Feld — co-founder of TechStars, managing director of Foundry Group, and a resident of Boulder, Colo. — suggested in his book Startup Communities that many cities can create ecosystems with entrepreneurial passion, culture, and resources. Admirably, he outlines a path for places like Indianapolis, Oklahoma City, and Tallahassee to become startup communities.

The story he tells is compelling and promotes action, especially to communities in the “pit of [economic] despair,” cities that are starving for jobs and new industry. The problem is that Feld, as well as many who have jumped on the bandwagon, have failed to evaluate rigorously the impact and sustainability of entrepreneurial communities through quantitative and qualitative data analysis.

Venture capital investment is an important feature of a high-impact, sustainable entrepreneurial community. In Boulevard of Broken Dreams: Why Public Efforts to Boost Entrepreneurship and Venture Capital Have Failed — and What to Do About It, Harvard Business School’s Josh Lerner discusses how venture-backed companies become publicly traded faster, have larger market value in industries such as computer software and hardware, and are more innovative, measured by patenting efficiency and quality, than non-venture-backed companies. Whether these benefits come from a venture firm’s ability to pick the best quality companies or through their contributions of funding, experience, and networking, startup communities have every reason to maximize the amount of venture dollars they can attract to the fold. Sadly, the 2012 Q4 MoneyTree Report on venture investment paints a bleak picture for regions outside the West Coast.

Data compiled from the MoneyTree Report’s “Historical Trend Data from the U.S. and for Select Regions,” show that during the past 17 years, only one region — the Pacific/West Coast region, driven mainly by California — has seen a sustainable increase in its share of total venture investment, increasing from 43 percent in 1995 to 57 percent in 2012. This could be for a number of reasons. Venture capital funds in California have grown larger and are invested in-state at higher rates than ever before, talented entrepreneurs continue to move to California, where failure is tolerated and costs associated with looking for new startups to work for are low due to the already established large ecosystem of startups, or maybe “it’s just the California culture, dude.”

Anecdotal evidence confirms these trends. Levi Belnap, a second-year MBA student at Harvard Business School and a founder of Peoplematics, an email search company, will be relocating to the Bay Area later this year. “For over a year, we assumed that we would stay in Boston to build our business,” Belnap said. “We love the Boston startup community. But after listening to our mentors and entrepreneurial peers, we decided it would be wise to head west.” Belnap feels drawn to California to compete with the “best of the best.” One of the company’s mentors counseled, “If you want to be a country music star, go to Nashville. If you want to build a technology company, go to Silicon Valley.”

Although the city of Boulder may be receiving more venture capital funding than two decades ago and has gained national recognition as a core “startup community,” the state of Colorado has seen a decrease in its share of the Mountain West region from 71 percent in 1995 to 57 percent in 2012. Nationally, the region has declined from a 6 percent to 4 percent share of total venture capital investment. This could suggest that while growth in an entrepreneurial community benefits its local area, it may be borrowing support from surrounding communities in the same state or region.

Without the Boulder startup community, one might argue that these companies would have launched in Denver anyway. Conversely, Los Angeles/Orange County and San Diego, as well as the states of Oregon and Washington, seem to be generating a relatively constant share of total investment. Silicon Valley continues to grow, creating a net gain for California and the Pacific/West Coast region. 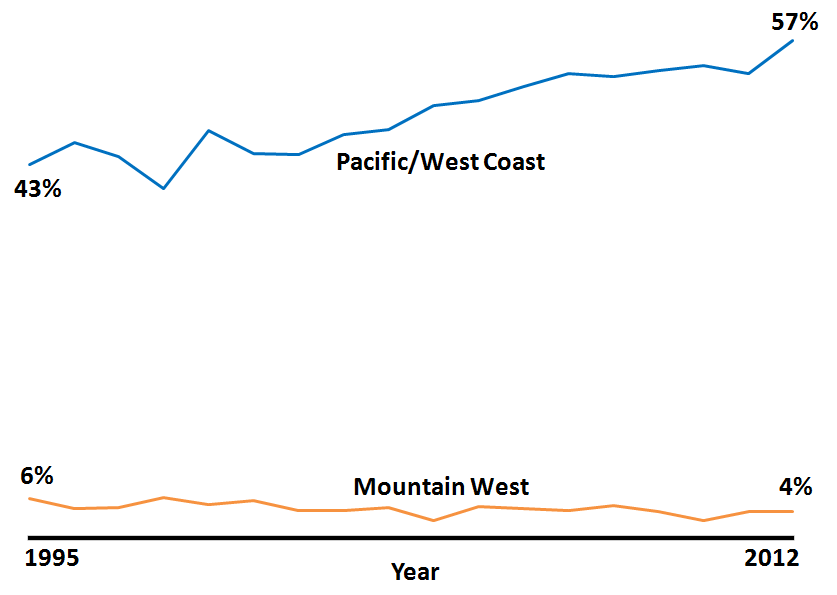 Metrics might include the number of startup jobs filled by employees coming from in-state, within the region, and outside the region, as well as net job gain or loss within the state. Investment and performance data such as angel investment from inside and outside of the region and acquisition information could also be very helpful.

Some of this information is already collected by the National Venture Capital Association. However, the effort is too intensive for one organization to handle. Governments need to work together to clearly define and coordinate metrics already being collected across their states. Investors and startups must be willing to share more investment and performance data. Researchers would then be able to use this data to understand what works and what doesn’t. It is a difficult solution, but one that can be leveraged to reap huge rewards and avoid tremendous losses.

Second, look to the Silicon Slopes of Utah or New York City. While the Mountain West and Mid-Atlantic regions lost ground to the West Coast, these were the only communities outside of Silicon Valley that substantially increased share of venture capital investment within their regions.

Third, communities should seek to build stronger collaboration with neighboring communities that can enhance the state and region rather than shift resources away from them.

Finally, communities can develop targeted strategies to increase venture capital funding or recruit entrepreneurial talent from outside their region.

While we might hope that entrepreneurial communities can flourish outside of the Golden State, for the time being, California continues to grow its dominance as the startup community of communities.

Unless more research is done to understand better what drives impact and sustainability in entrepreneurial communities, new and on-going attempts to build hometown “Silicon Valleys” are almost surely bound to fail.

Carlos Kemeny is a Dual-PhD student at Carnegie Mellon University and Católica Lisbon School of Business and Economics, researching venture capital, economic development, and academic entrepreneurship. He is a founder of numerous startups and can be followed on twitter @kemenyc.