A few years ago, creating a “data center in a box” was a novel idea. Essentially it meant loading up a big shipping container with servers, which you could then deploy just about anywhere you could get power into it. It’s an even more novel idea to put some wind-powered generators on top of the shipping containers to have them generate their own electricity.

Advanced Micro Devices, Hewlett-Packard, Clarkson University and a New York state energy research group have banded together to test the idea. All of the parties will deploy some of the data centers like this and study whether they can be sufficiently powered by either wind or solar power.

The New York State Energy Research and Development Authority (NYSERDA) and the rest of the team will study critical questions of how to maintain reliable power for these data centers and how to automatically shift a computing load between the data centers. The study is being funded by a $374,000 NYSERDA grant and private funding sources. AMD engineers developed the proposal with Clarkson University.

Students will run experiments on effectively managing data through a distributed network powered by renewable energy, said a project manager at NYSERDA, in an interview. Then the second phase of the project will incorporate the hardware, including HP’s performance-optimized data center (POD), which uses AMD’s Opteron processor chips for energy-efficient cloud computing. 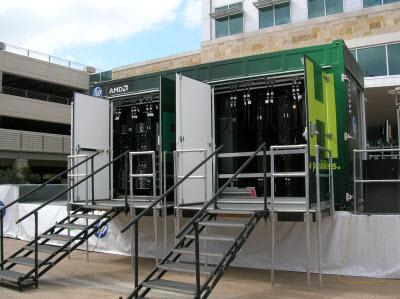 The whole point is to create cloud computing capability with distributed computing as well as distributed power generation, said Kester. The key challenge is to get enough power to the data centers with relying on a traditional power grid is a key challenge, particularly because these data centers are usually located in big cities. Wind power generators, on the other hand, are usually located in remote areas where the wind is plentiful.

Ultimately, the goal is to co-locate dynamic energy sources with dynamic computing sources to improve the economics, performance, and environmental benefits of wind power and portable data centers. HP created its POD data centers in a box to be modular, so customers can easily order more of them to deal with fluctuating computing demands. They can be quickly added to places with aging infrastructure, limited space and shrinking budgets — even as computing demands increase. The PODs are easily removed and serviced, and they have their own heating and cooling systems, as needed.

HP recently added a new POD solution, dubbed the EcoPOD, which can offer 95 percent greater energy efficiency compared to traditional data centers. HP will lend its expertise in energy-efficient design to the experimental project, which will take place in the Hudson Valley in New York.

“Electrical power demands for data centers are skyrocketing,” said Kester. “As demand for data centers goes up, we see a collision coming as the electrical grid hits its limit. The power consumption will be a restriction on the industry. The costs will be unsustainable. The question is how do we get to 100 percent independence from the grid.”