At Microsoft’s Build 2016 developer conference, CEO Satya Nadella declared that Windows 10 is the “fastest growing version of Windows for both consumers and enterprises,” and Terry Myerson, executive vice president of the Windows and Devices Group, added “Windows 10 is off to the fastest adoption of any release ever.” The title was previously held by Windows 7, so just how much faster is Windows 10 being adopted? It’s a difficult comparison to make as there are multiple important factors helping Windows 10, but in short, Windows 10 hit over 300 million devices about 6 months sooner than Windows 7 did. 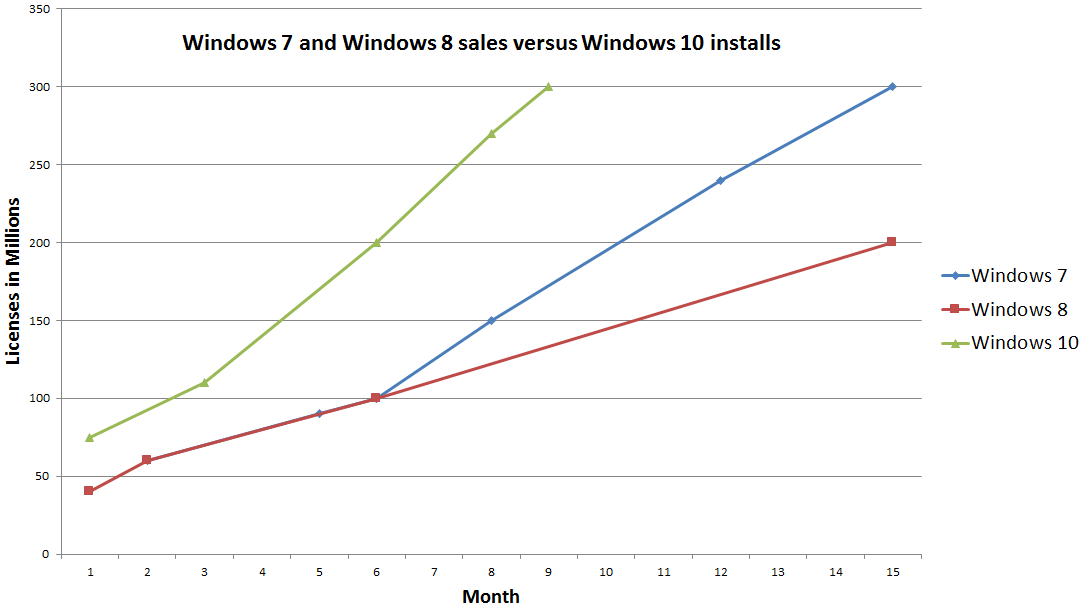 As you can see, Windows 7 and Windows 8 milestones were similar for the first six months or so, though it quickly became clear that Windows 8 was not selling as quickly as its predecessor did. Windows 10 was always ahead of both, and the slope of its growth is impressive.

Here are the three big reasons why Windows 10 is outpacing its predecessors:

Windows 10 is a service. That means it is regularly updated with not just fixes, but new features too. Windows 10 was built in a very different way than its predecessors, and it is still being built.

For these reasons, and because Windows is still critical to the company’s business, Microsoft is very aggressively pushing Windows 10. But no software is perfect, and there are many reasons why someone may not want to upgrade. Some users have even complained that their PCs have upgraded without permission. While the company means well (new, more secure software for free!) and has backpedaled on upgrade mistakes, the reality is you can’t please everyone, even with a free upgrade.

The real test for Microsoft will be keeping up Windows 10’s momentum once the free upgrade offer expires. The company today reiterated that Windows 7 and Windows 8.1 users have only three months left (July 29, 2016 is the last day) to upgrade for free, and then the regular pricing kicks in for them too ($119 for Home, $199 for Pro).

But I wouldn’t be surprised if Microsoft ended up extending its offer. If it doesn’t, the company’s push to get 1 billion devices running Windows 10 “in two to three years” could fall short. Almost a third of the goal has been reached in nine out of 36 months. If that slows, Microsoft might just have to bring the deal back.