Microsoft has turned on a new set of Windows Tips that inform Chrome and Firefox users on Windows 10 that Edge is a “safer” browser. We reached out to Microsoft to find out how long this latest recommendation has been active. “This wave of Windows Tips for Windows 10 users began in early November,” a Microsoft spokesperson told VentureBeat.

If this sounds familiar, that’s because Microsoft turned on similar Windows 10 tips back in July, warning Chrome/Firefox users about battery drain and then recommending Edge instead. Those notifications were on the battery icon in the operating system, while this new one is on the Edge icon: 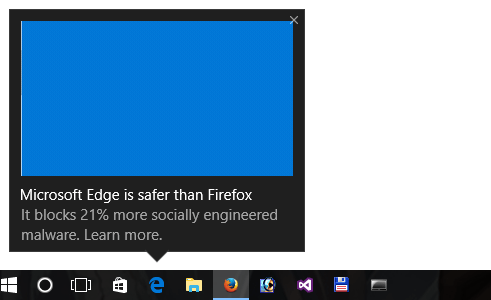 Reddit user by “illCodeYouABrain” noted the prompt happened when launching Firefox, although not every time. We confirmed with Microsoft that the same “tip” was active for Chrome as well.

In July, a Microsoft spokesperson told us that “these Windows Tips notifications were created to provide people with quick, easy information that can help them enhance their Windows 10 experience.” This time, the spokesperson added that Windows 10 users can always change default settings and preferences, including turning off these notifications in their system’s settings (for those interested, open the Settings app => System => Notifications => Disable “Get tips, tricks and suggestions as you use Windows”).

The battery drain “tip” was timed with Microsoft’s battery-savings campaign for Edge, and this security one is no different. NSS Labs compared the security of the three major Windows browsers and unsurprisingly — Microsoft has a long history of asking NSS Labs to do a study in which its browser comes out on top, though it claims this one wasn’t commissioned — Edge won in a particular metric. That’s where the “It blocks 21% more socially engineered malware” part from the notification comes from.

Security is of utmost importance in browsers, and Edge is actually quite secure. For a long time now, Microsoft has been pushing the envelope in security, and it’s understandable the company wants to highlight that. But as we noted last time, leveraging notifications within Windows 10 to promote cherry-picked results could be seen as poor practice. Google and Mozilla don’t have the option to do the same in Windows 10 if they want to highlight the strengths of Chrome or Firefox, respectively.

We’re already used to Google’s search engine pushing Chrome, Yahoo linking to Firefox, and Bing recommending Edge. This year, Microsoft has upped the ante in the browser war with Windows 10.