Microsoft today announced that Windows 10 is now installed on over 270 million devices. It took the latest and greatest operating system from Microsoft about eight months to hit the new milestone. Microsoft CEO Satya Nadella declared that the operating system is the “fastest growing version of Windows for both consumers and enterprises.”

“Windows 10 is off to the fastest adoption of any release ever,” Terry Myerson, executive vice president for Microsoft’s Windows and Devices Group, said on stage at Microsoft’s Build 2016 conference. Hardware partners have launched more than 500 new devices designed specifically for Windows 10, which has already been used for more than 75 billion hours, he added. Oh, and Microsoft is also seeing “the highest customer satisfaction of any version of Windows.”

Microsoft is aiming to have 1 billion devices running Windows 10 “in two to three years,” though that includes not just PCs, but smartphones, consoles, and other devices as well. In other words, Microsoft has reached more than a quarter of its goal in eight out of 36 months. 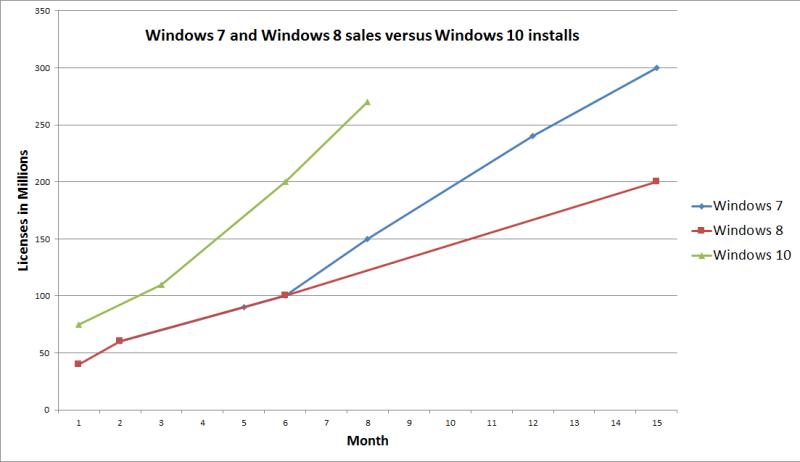 As you can see, Windows 7 and Windows 8 milestones were similar for the first six months or so, though it quickly became clear that Windows 8 was not selling as quickly as its predecessor did. In addition to the free upgrade, Microsoft also changed the game with Windows 10 by including phones (Windows 10 Mobile) and other devices in the total count.

But even so, the growth is impressive: Windows 10 is outpacing Windows 7 in the same timeframe by 145 percent. And the biggest driver is, of course, the fact that the operating system is available as a free upgrade for Windows 7 and Windows 8.1 users during its first year. This is why, when compared to its predecessors, Windows 10 is being adopted more quickly (and also why this time Microsoft is counting “active devices” rather than “license sales”). For all the reasons above, Microsoft is very aggressively pushing Windows 10. And because no software is perfect, there are many reasons why someone many not be thrilled. Some users have even complained that their PCs have upgraded without permission. While the company means well (new, more secure software for free!) and has backpedaled on upgrade mistakes, the reality is you can’t please everyone, even with a free upgrade.

But Microsoft isn’t budging. “Customers continue to be fully in control of their devices, and can choose to not install the Windows 10 upgrade or remove the upgrade from Windows Update (WU) by changing the WU settings,” a Microsoft spokesperson told VentureBeat earlier this month.