Windows 7 is still the king, but it no longer holds the majority.

Update: Net Applications updated its numbers saying they did not pass QA. As a result, Windows XP is still above 10 percent. The original story is below.

Nine months after Windows 10’s release, Windows 7 has finally fallen below 50 percent market share, and Windows XP has dropped into single digits. While this is good news for Microsoft, April was actually a poor month for Windows, which for the first time owned less than 90 percent of the market, according to the latest figures from Net Applications.

Let’s break that figure down. First, let’s look at Microsoft’s push to get 1 billion devices running Windows 10 “in two to three years.” Windows 10 was installed on over 75 million PCs in its first four weeks, passed 110 million devices after 10 weeks, 200 million in under six months, and 270 million after eight months.

This uptake has resulted in notable growth for Microsoft’s latest and greatest, but that growth is slowing. Windows 10 had 14.15 percent market share in March and gained just 0.20 percentage points in April to hit 14.35 percent. 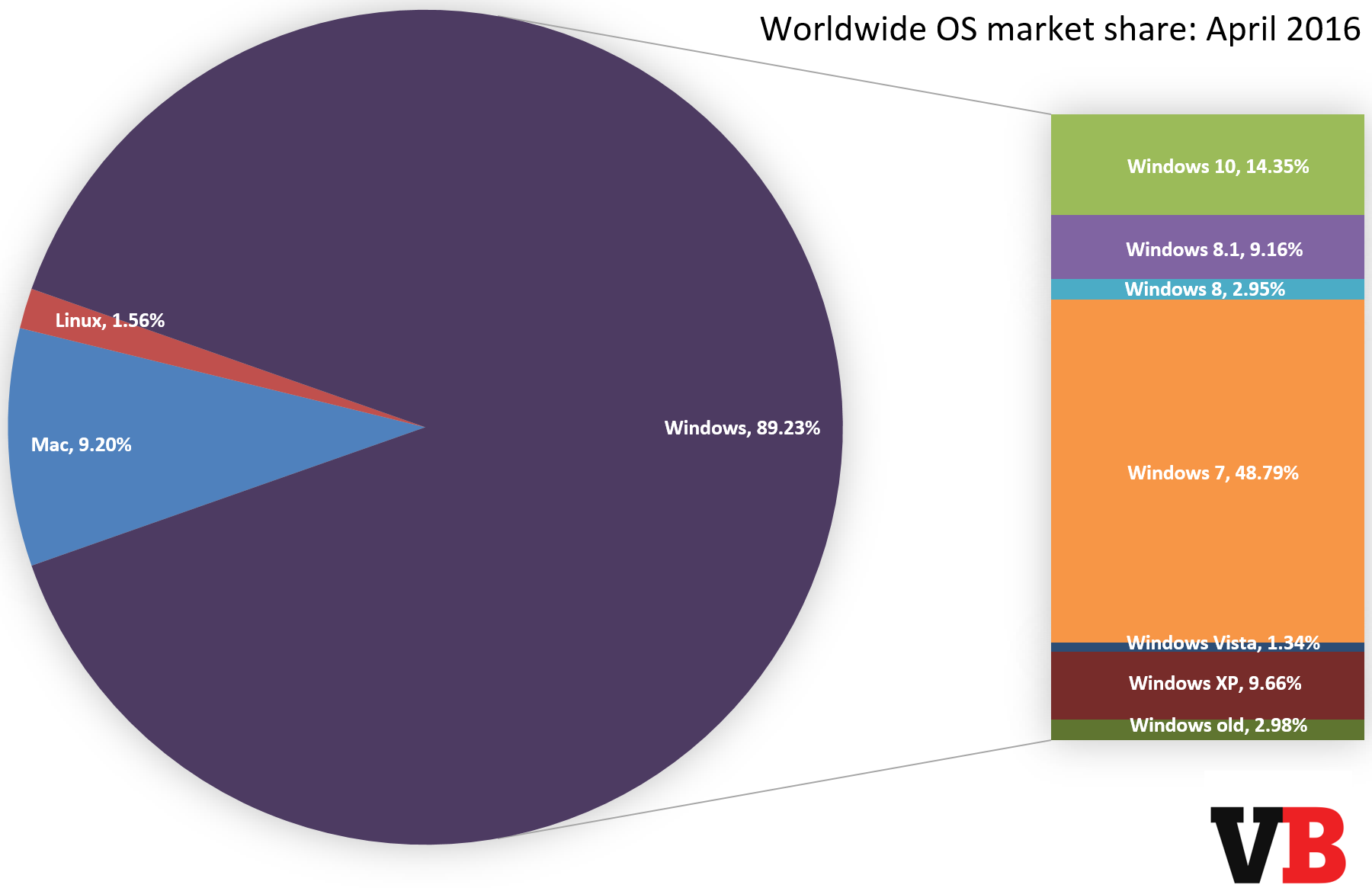 Despite Windows 10’s inevitable rise, Windows 7 will likely keep its title of “most popular OS” for a long time. Windows 7 overtook Windows XP way back in September 2012.

Windows Vista slipped 0.07 points to 1.34 percent, and Windows XP dropped 1.24 points to 9.66 percent. The free upgrade to Windows 10 doesn’t apply to Vista or XP, but thankfully the two are still losing share. XP’s fall into single market-share digits has been a long time coming, given that Microsoft ended support for the ancient operating system in April 2014.

Windows has never been below the 90 percent mark, at least when it comes to Net Applications (we checked each month; the data goes back to November 2007, when Windows held 95.89 percent market share). While Windows has been very slowly losing share over the years, it’s worth noting that a more than 1 percentage point drop is rare, so this is likely a blip. We expect to see Windows back above 90 percent this month.

Net Applications uses data from 160 million unique visitors each month, captured by monitoring some 40,000 websites for its clients. This means it measures user market share.

If you prefer usage market share, you’ll want to get your data from StatCounter, which looks at 15 billion page views every month. The operating system figures for April are available here.