Everyone is well-aware by now that Windows 8 and Windows 8.1 have not seen the impressive adoption rate of their predecessor. Yet the duo had a particularly good run last month, finally passing 15 percent market share together, according to the latest figures from Net Applications.

More specifically, Windows 8 gained 0.29 percentage points to 5.88 percent while Windows 8.1 gained 4.25 percentage points to 10.92 percent. Together, they owned 16.80 percent of the market at the end of October, up from 12.26 percent at the end of September. It’s certainly a big jump, and Windows 8.1 is finally in the double digits, though it’s not particularly impressive overall given that the latest version has now been available for over a year. 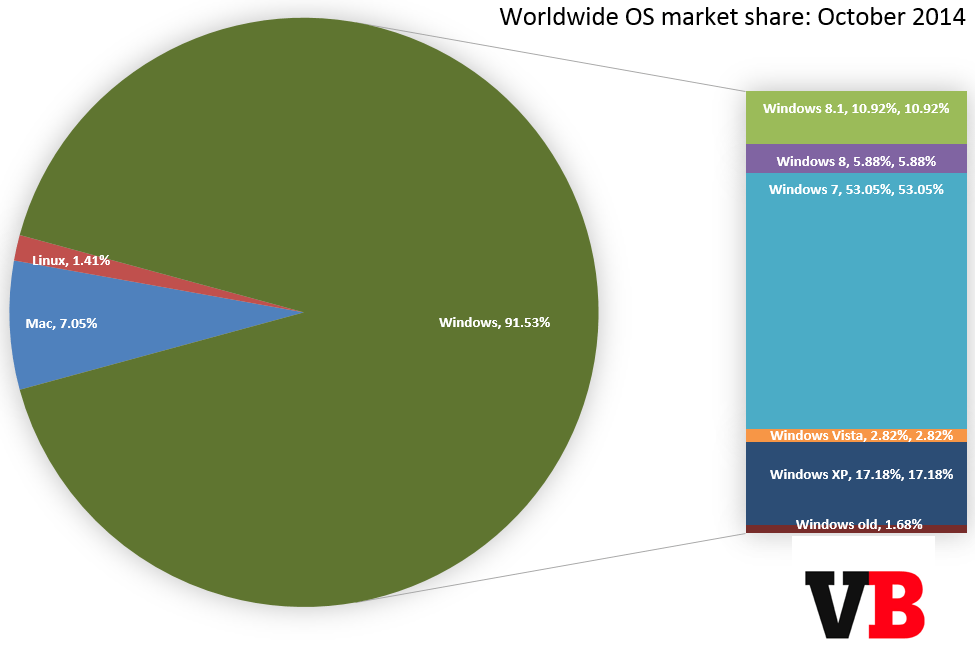 These gains did not come at the expense of Windows 7, which still managed to grow 0.34 points to 53.05 percent. The most popular OS has continued to increase its share steadily throughout 2014 (it’s up overall from 47.49 percent in January, experiencing only minor drops during some months) despite Microsoft’s push to get businesses and consumers to upgrade. Just yesterday, the company stopped selling consumer versions of Windows 7 to OEMs, which could have a noticeable impact on Windows 7’s share.

Windows 7 may be doing well, but the progress for Windows 8.x had to come from somewhere. Windows Vista fell 0.25 points, finally slipping below the 3 percent mark (2.82 percent to be exact). Windows XP meanwhile dropped a whopping 6.69 points to 17.18 percent. The biggest catalyst for these changes was most likely back to school sales in September, which are better reflected in the data after students use their new machines for a full month.

This is the biggest fall we’ve seen for Windows XP yet, and it’s now below the 20 percent mark for the first time in over a decade. It appears that businesses are finally reacting to Microsoft ending support for the operating system, which happened way back in April.