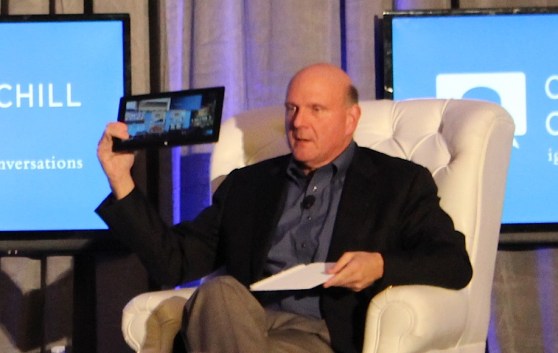 If you’re like many managers, you yearn for a simple “dashboard” that can tell you everything you need to know about your business at a glance.

“I’ve got news feeds, stock feeds, twitter feeds, all going past on the screen, and if something catches my interest, boom, I dive in immediately, because it’s alive with the activity that’s important to me,” Ballmer said yesterday, at a Silicon Valley event where he appeared onstage with LinkedIn founder Reid Hoffman.

Ballmer was bullish on Windows 8’s prospects, especially among business users, and downplayed the much-criticized disappearance of the Start button in favor of Windows 8’s new, touch-centric Start Screen. Of course, you’d expect that from Microsoft’s evangelist-in-chief: He wants to sell as many copies of Windows 8 as possible. But the digital dashboard angle was a new one.

“People say, ‘Is there some adjustment because the UI is different?’ and the answer is, there’s some. If you want to live in the desktop, you pretty much can. And yet what we find is people are far more interested than they thought they would be in the generation of new applications, and particularly our Start screen, as this kind of … digital dashboard.”

The Start Screen’s “Live Tiles” might fall short of the kind of detailed data you’d expect from a true enterprise dashboard. But the tiles can offer all kinds of up-to-the-second data from the apps behind them, and programmers can customize those apps to deliver the kinds of information most relevant to users. If someone sees an interesting tidbit, stock quote, or chart on a live tile, they can click on the tile to launch the app and get a more detailed look. For in-house corporate developers, the possibilities may be richer than you’d expect.

Ballmer described a recent meeting with the CEO of one of the world’s largest banks.

“I popped open the machine and showed it to him. And he was like, ‘Oh! You mean in the bank branches, we could put like 5 live tiles up with all the information that the manager needs about what’s going on in the store, and they could just click on it and get more data, would that be OK?’

Ballmer said the CEO signed up to do a deployment of Windows 8 across all of the bank’s branches.

“I’m very excited,” Ballmer said, no doubt counting up the license fees that will soon be rolling in. “And they’ve got a lot of branches, so I’m particularly excited.”

“At the end of the day, what people want is information at a glance, and there’s a lot in Windows 8 from the consumer perspective. But there’s a lot of ability for businesses to put front ends on their apps that make these systems alive with the activity that people need to know,” Ballmer concluded. “Plant floors, bank branches, call centers, you name it — it’s valuable.”