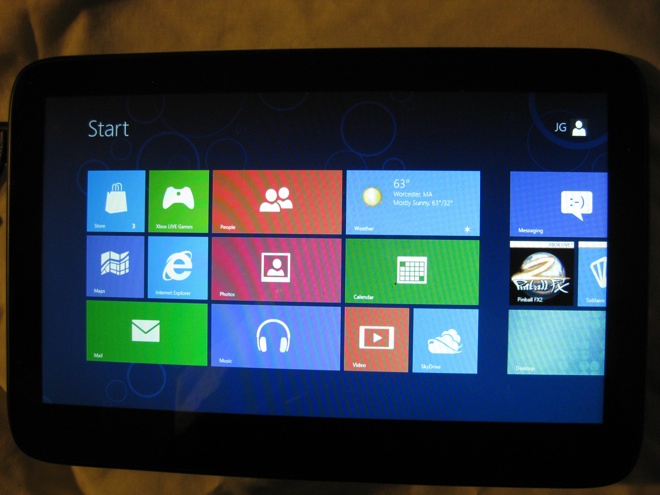 Microsoft recently released its Windows 8 Consumer preview. Many have written about its features and capabilities, so I won’t rehash that for this article, other than to say that while it isn’t perfect, this beta version seems quite well done.

However what hasn’t been highlighted is Windows 8’s ability to not only make new machines shine, but also an ability to resurrect the many old “boat anchor” PCs laying around that so many of us had give up on. While I’m sure that wasn’t Microsoft’s primary goal with Windows 8, it may be a real benefit to many of us with older, more feeble devices we’ve not yet handed down to kids/relatives, recycled, or disposed of on eBay.

I’ve had an Exo PC tablet for about a year. It runs a proprietary touch-interface overlay on top of Windows 7, and uses an older generation Atom chip for its engine (N450 1.66GHz). After experimenting with it for a few weeks I found it extremely slow and frustrating to use, especially after using my next generation Intel Core powered laptop daily for work. In fact it was so painful to use that it has been sitting on the shelf and unused for months (I never quite got around to getting rid of it).

But, since I was itching to try out the new touch-oriented Metro interface in Windows 8, I figured what the heck. Even if it ran slow, I could at least get a sense for how it will work, and it will no doubt work many times better on the properly powered tablets due out later this year. So I loaded up my Atom based ExoPC tablet with Windows 8 preview, which went fairly smoothly.

And what I found utterly surprised me: The machine went from painfully slow to downright spunky (don’t forget it’s running an older Atom chip, so it’s all relative). What used to take minutes to boot with Windows 7 now boots in about 10-15 seconds! The touch interface is responsive and no longer hobbles along not being able to keep up with my gestures. Even the battery life seems to have improved (by 40%-50% as far as I can tell).

Windows 8 still needs some work as I had a few minor glitches with USB not being properly enabled (which I was able to correct in the Device Manager, even though it’s not easy to find), and it wouldn’t recognize the chip which powers the HDMI video out. But all in all, the machine actually works quite well.

I found the Metro Interface to be very responsive (perhaps even more so than on my Windows Phone) and using the browser is almost as good as on my dual-core Intel i5 powered laptop. I can only guess how much better the production code might be at making this experience even better. I may actually be able to resurrect this machine for some useful purpose. But with its big screen and touch interface, I can certainly see using it around the house for browsing and even watching movies, which it does very well (and will do even better once Microsoft offers drivers for the HDMI output).

Microsoft has been promising that Windows 8 would deliver a new level of performance and work on a modest hardware platform (even with the Metro interface), unlike previous OS versions where hardware upgrades were automatically required. Based on my experience, it looks like Microsoft has delivered admirably. And here is something I haven’t said very often and you may not have heard recently – kudos to you, Microsoft!

If Windows 8 works this well in the final version, I can see a lot of users opting to buy just the OS upgrade and resurrecting some of their old boat anchors. The hardware vendors may not like it, but we users will certainly thank you for it.