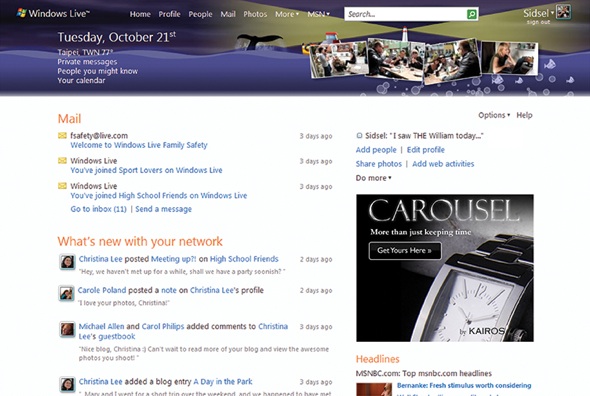 Microsoft is launching “Wave 3” of Windows Live, which includes a bunch of new features to turn Live into more of social networking site. From what I saw at last night’s press preview, I won’t be giving up my Facebook account anytime soon, but it looks pretty slick. More importantly, it’s hard to deny the potential of tapping into the hundreds of millions of users already on Microsoft Hotmail and Messenger.

The problem, Microsoft says, is that people have so many online accounts, be it for social networking, email, instant messaging or whatever — why not make Windows Live the hub for all of that? Most significantly, that means taking the social networking components that already existed within Windows Live Spaces and moving them front and center. So now users have a profile that’s updated with activity from all the various Live services, as well as a news feed that lets them keep track of what their friends are up to. The rest of Live will also be seeded with more social features — Messenger, for example, now has a “what’s new” area that’s basically a news feed of friends’ activity within the instant messaging service.

Live is also opening itself up for outside sites to publish activity to a user’s feed, kind of like Facebook’s controversial Beacon, but crucially users must opt-in before extra information gets displayed. Launch partners include Daum, Flickr, Flixster, iLike, Pandora, Photobucket, StumbleUpon, TripIt, Twitter, WordPress and Yelp. 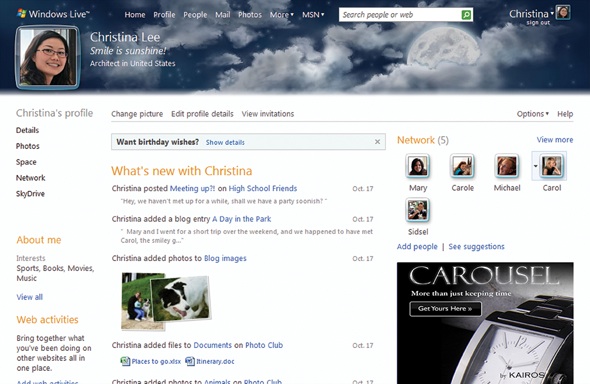 I’m skeptical that Windows Live can get serious play as a social network against MySpace and Facebook this late in the game. Sure, all the new features are nice, and linking the Live services together makes for a more compelling social network than Windows Live Spaces alone. (I’d barely even heard of Spaces before this, and I don’t know anyone who uses it.) But I don’t see anything here to make anyone switch over from the big existing networks, or to tempt them to add yet another social network account — isn’t that the problem Microsoft is supposed to be addressing? And given Microsoft’s strategic investment in Facebook last year, I’m not sure if it wants to taking Facebook on directly.

It’s hard not to see this as a rather stale “me too” move. It even comes on the heels of Yahoo’s effort to integrate its services into a social networking platform. And in Yahoo’s case, there’s an emphasis on building a platform for third-party developers. Microsoft is also opening up to third parties, but the emphasis in the press materials, at least, is more, “Hey, we have a social network, too!”

I’m guessing the audience for these new features will fall into two camps: People already in a social network who don’t see this as a replacement, but as a way to better connect and “socialize” the Live services they use; and the folks who haven’t really dived in to social networking yet, and want to dip their toe in with “social networking lite.” This certainly won’t get much play among all the social media addicts in Silicon Valley — but as the Microsoft folks kept telling me last night, Silicon Valley isn’t like the rest of the world.