Microsoft is delaying the update to its mobile operating system, called Windows Mobile 7, with the new phones carrying the operating system now increasingly unlikely to hit the market before 2010, according to sources.

The delay comes at a bad time for Microsoft, because rivals like the iPhone and now Google’s Android are hitting the market with souped up operating systems that are creating a lot of buzz. Apple’s iPhone 3G is showing significant traction, and Android has created its own buzz by pushing an open source mantra — because openness wins converts among developers.

CNET first reported about a significant delay. Microsoft partners who had expected to have a final release in their hands by early 2009 have been told now that it won’t be ready until the second half of 2009. However, those partners will need access to the OS for a few months before they can begin distribution, pushing back earliest circulation of the phones into 2010. Partners include companies like Verizon, Motorola and Samsung, all of which plan new phones that include the Mobile Windows 7 OS.

We contacted Microsoft last night for comment. They said early today they’d have a response shortly, but we haven’t heard back. We’ll update when we hear. [Update: Scott Rockfeld, group product manager of Windows Mobile, responded, saying the company is “not publicly sharing our roadmap at this point.”] 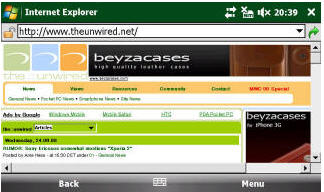 Windows Mobile 7 is expected to have features like gesture recognition and speech input. In the meantime, Microsoft will push for a minor update its 6.1 version as early as this year still, calling it 6.2 — which will have some bells and whistles like an improved browser that can display Flash and Ajax applications. (See screenshot left of the pending update, which shows that Explorer 6 will be rendering on the OS; more at Theunwired).

CEO Steve Ballmer and mobile unit head Andy Lees met with 17 of the company’s largest cell phone maker and carrier partners recently, and that’s when the news of the delay first circulated.