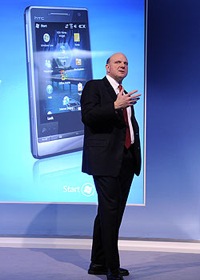 With a whole raft of competitors hogging the mobile spotlight recently, Microsoft tried to stage a comeback at Barcelona’s Mobile World Congress with today’s announcement of new Windows Phones from HTC, LG, and Orange. Chief executive Steve Ballmer also confirmed a touchscreen user interface, an application marketplace, and a MobileMe-style synchronizing service — that yes, rhymes will a certain device by Apple, though Microsoft apparently didn’t realize it.

In her rundown of the news, All About Microsoft’s Mary Jo Foley reports that this is part of a broader shift in Microsoft’s mobile strategy; the company says it’s now interested in selling to both businesses and consumers, not just businesses (who are probably all using BlackBerrys anyway). There’s some rebranding, too — you may have noticed that Microsoft is calling the devices “Windows Phones” now, though the operating system is still Windows Mobile.

Will consumers buy it? It’s hard to say, since I haven’t had a chance to try any of these new products and services myself. (Neither has Matthaus Krzykowski, VentureBeat’s man in Barcelona.) Jesus Diaz at Gizmodo reports that “the new interface rocks.”

Still, it’s hard to get too excited, and not just because early screenshots already indicated this news was coming. Given that every major smartphone maker already has touchscreen support, it would have been incredibly lame if Microsoft didn’t follow suit. Ditto the Windows Marketplace for Mobile, which should open this fall — a year or more after the app stores by Apple and Google. And likely several months after the ones for the Palm Pre and BlackBerry.

On the other hand, Apple has has a rocky experience launching MobileMe, so Microsoft’s free My Phone service (currently in invite-only testing) could be a chance to actually do better than Apple, rather than just copying its moves.

Also disappointing: No word yet on the rumored ZunePhone or Project “Pink”.