As of this afternoon, select residents of Christiansburg, Virginia can tap drones operated by Google parent company Alphabet’s Wing for quick and fee-free deliveries of packages, over-the-counter medications, snacks, and gifts. The company today revealed that it’s become the first to operate a commercial air delivery service directly to homes in the U.S., with the launch of a previously announced pilot involving FedEx Express, Walgreens, and local Virginia retailer Sugar Magnolia.

Sugar Magnolia will box up birthday cards, small gifts, and sweets for drone delivery customers. From Walgreens, the first retail pharmacy to partner with Wing in the U.S., drone fleets will ferry over-the-counter medicines and other wellness items to folks’ homes. And on the FedEx Express side, recipients living within designated Christiansburg zones who opt in will receive some shipments via drone, in customized boxes. (Wing says that FedEx will complete its first scheduled Wing drone delivery today.)

Most orders within the four-mile radius of Wing’s distribution facility are fulfilled within about 10 minutes, according to the company.

The pilot was made possible by the small-sized air carrier designation Wing secured from the Federal Aviation Administration in April. The recently expanded classification — which was initially created to cover traditional charter flights — allows the company’s multiple pilots to oversee multiple unmanned aircraft making commercial deliveries simultaneously. Under current drone-specific regulations, companies can’t exact payment for deliveries over distances beyond a human operator’s line of sight. 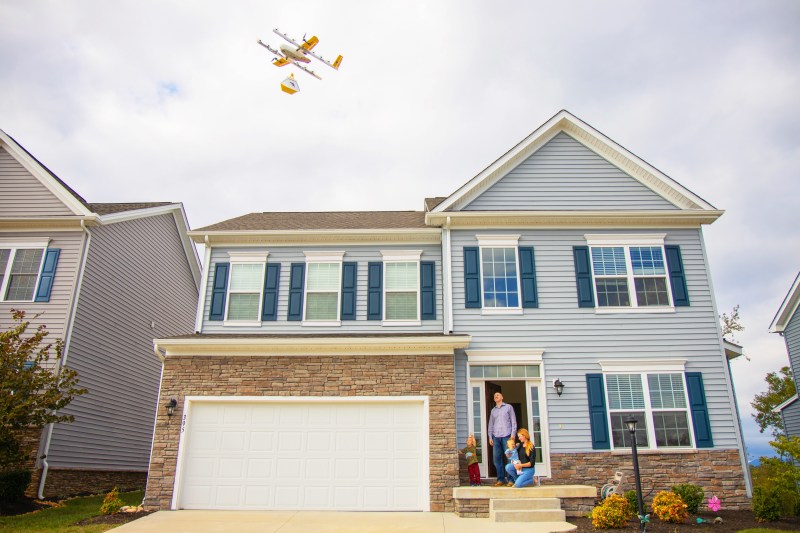 Earlier this year, Wing became one of the first to launch a commercial drone delivery service after Australia’s civil aviation authority, Civil Aviation Safety Authority (CASA), granted it approval following more than four years of testing, 70,000 flights, and 3,000 deliveries. Around 100 homes in the suburbs of Crace, Franklin, and Palmerston have access to the service currently, and if all goes well, it will expand to customers in Harrison and Gungahlin.

Wing’s drones hover about 20 feet in the air during pickup. A tether lowers, and a human operator hooks the package onto the line. The drone winches the package and secures it, after which it travels to a designated location the yard or driveway and lowers and releases the package. Once it detects the package has touched down safely, it heads to the next pickup spot or returns to Wing’s “Nest” in North Christiansburg.

Despite these bumps in the road, Wing is intent on forging ahead. Wing CEO James Burgess recently announced the company would launch a free 10-minute drone delivery trial in Helsinki, Finland for items weighing 3.3 pounds or less up to a distance of 6.2 miles. Flight trials began earlier this year in Tampere and continued through the winter.