AT&T customers may finally get the iPhone service quality they expected when they spent $200 or more on a phone. U.S. wireless carriers have let reporters know that they’ll be spending more in the second half of this year to add capacity. They need to: Wireless traffic increased tenfold from 2007 to 2008, and is still growing.

Dow Jones reports that is great news for Ericsson, Alcatel-Lucent, Tellabs and Ciena, which make the gear used by wireless carriers. They’re less likely to end up like Nortel Networks, the Canadian network gear maker that filed for bankruptcy in January. 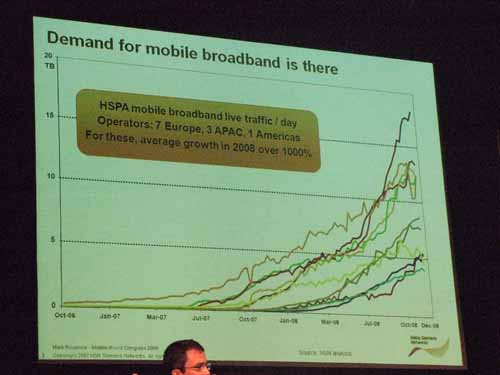 It will eventually be great news for customers, too, but for now the increasing demand for wireless access has outrun the available supply. In this slide from a conference earlier this year, Nokia Siemens Networks’ head of radio access, Marc Roanne, shows the huge jump in consumer cellular data traffic in 2008. iPhones made up a lot of the traffic, but plain old dumbphones — “feature phones” in industry jargon — accounted for just as big a part of the increase. No matter what they paid for their phone, people are using its data services more and more.

Another chart Roanne showed details how it’s possible that carriers could increase the amount of traffic they carry 100 times over current levels. There are some engineering details in how that kind of increase would get rolled out, but just knowing it’s possible is good news. 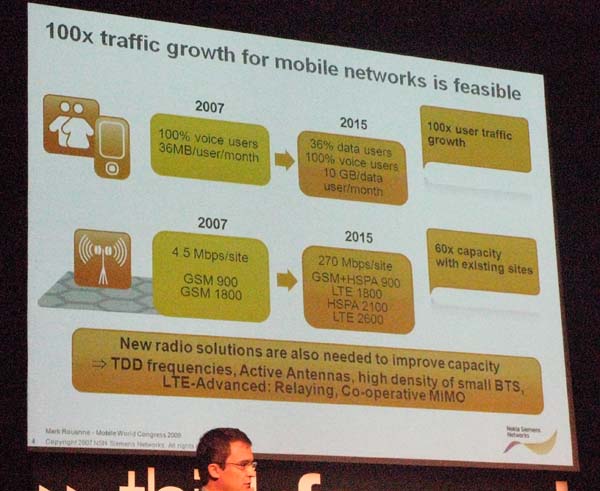